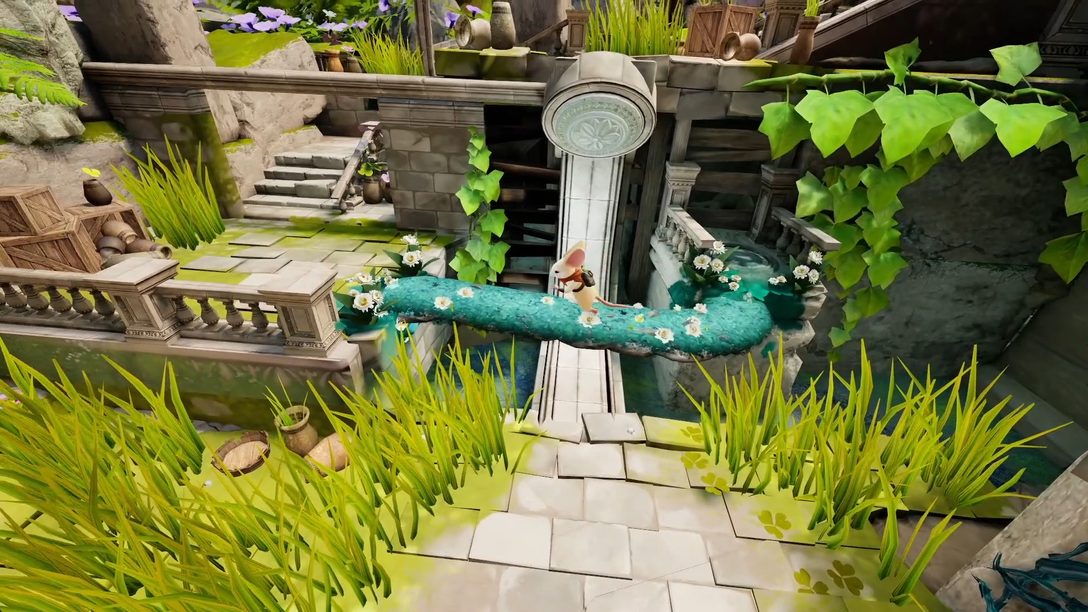 It’s finally happening! On March 31 exactly two weeks from today, you’ll be able to reunite with Quill in Moss: Book II. As the next game in the franchise, Book II builds on the story you started with Quill in the original Moss. In this continuation of the journey, the stakes are higher than ever as Quill works to save the world of Moss and end the merciless rule of the Arcane. New allies, old friends, and the very world around you will offer help along the way, but in the end, it is you alone who can lift Quill up to save this world, and together, rise to legend.

To celebrate this announcement, I had the pleasure of sitting down with PlayStation’s Justin Massongill and Tim Turi to record an episode of PlayStation Underground to give you a sneak peek at some of the environments, enemies, and challenges you’ll encounter in this new adventure. While I showed off some new, unique features—including a teaser for a pretty big encounter that Quill is about to face—I purposefully left out a lot of really cool things that we want you to experience on your own. And I have a feeling you’ll be glad we didn’t spoil them for you.

If you don’t have time to watch the entire PlayStation Underground episode, here are some highlights that I think you’ll enjoy:

We start the episode in the gardens, an area just outside of the castle that you traveled to in the first game. There’s a reason you made the journey to the castle, but we won’t spoil that for the few of you who have yet to play Moss. By now, you’re a couple chapters into the game where you’ll have already met a few new characters, and both you (the Reader) and Quill have unlocked new abilities. As the Reader, you have a real physical presence in the world, and in addition to guiding Quill, you’re also able to reach in and interact with the environment—something you can expect to do in all new ways in Book II. With your new nature attunement abilities, you can now grow vine bridges and paint vines on the walls to help Quill access places she otherwise wouldn’t have been able to go. This will be important as you travel through the game.

While running on the vine bridges is exciting, since Moss, Quill has learned a new skill of her own: climbing. With your ability to grow vines on the walls, and her ability to climb, she can now reach high-up ledges. This is very exciting, as it allows us to create new platforming challenges that Quill will need your help navigating.

But these gardens aren’t all flowers and butterflies—there’s danger that lurks in the shadows. And as you travel towards the conservatory, you’ll face the Ripper, a new enemy (one of many!) that you can grab and interact with. It’s super fun to wind them up and release them like wrecking balls. Let’s just say that sometimes you will want to keep them around to help solve puzzles.

When playing Book II, you’ll travel to exciting new places, including the Foundry beneath the castle, the epicenter of where Arcane weapons are forged. Luckily, Quill is gifted a hammer to better equip her for this daunting challenge. As you’ll see, it’s quite hefty in size, which makes it A lot of fun to crush things. And with both you and Quill working together, it can be used not only to make scrap metal out of armored enemies, but also as a crucial tool to get out of other predicaments.

Along with new weapons—yes, I said weapons plural ;) —you’ll encounter new enemies as you progress further into Arcane territory. Here’s a quick glimpse of the Bomber:

As you would expect, you’ll need to watch your step as it tosses mines your way. And be prepared, as it takes more than a simple strike to take care of this threat…

And while I’ve said it before, I just can’t stress this enough: the journey in Moss: Book II will be trying—filled with triumph and heartbreak alike—which is why Quill needs you by her side more than ever. Your adventure will be grander than before. Filled with more emotion. More interaction. More challenges. It won’t be easy, but saving the world never is.

And if you think Quill’s hammer is impressive, let’s just say you haven’t seen anything yet…

The team at Polyarc is extremely proud of this game and we cannot wait to share it with you. And trust us, this was only a small taste of this all-new adventure. We hope you loved what you saw today, and that you’ll fall in love with Quill all over again in the coming weeks.