Venom: Let There Be Carnage – bringing the iconic symbiotes to life 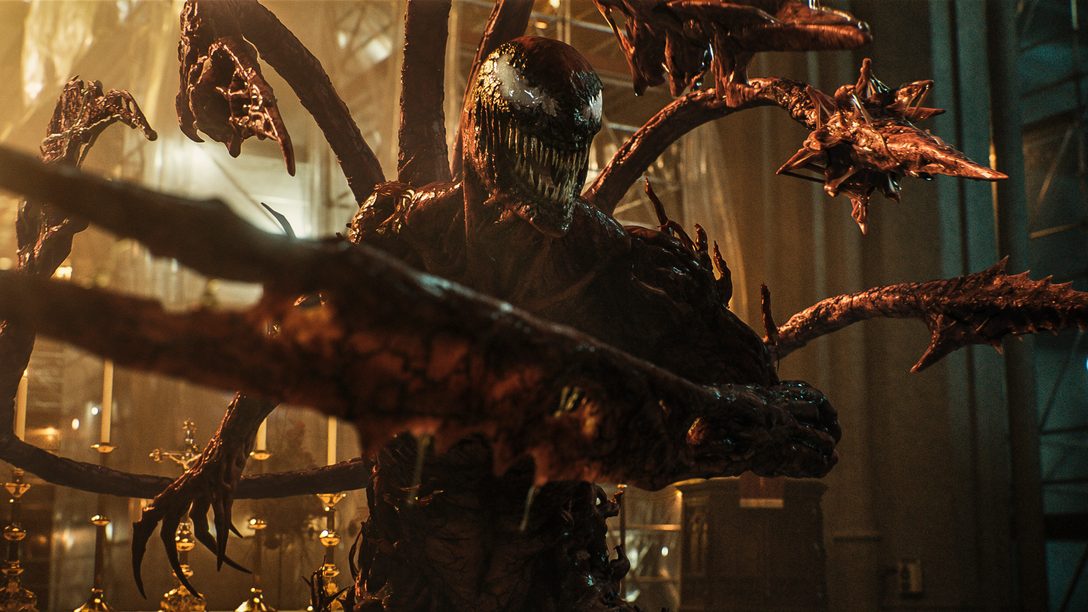 Director Andy Serkis guides us through the big screen adaptation of these larger-than-life characters.

Venom is making his presence known. The fan-favourite Spider-Man character has already made a surprise appearance in a new trailer during this month’s PlayStation Showcase. And now he’s returning to the big screen by way of Venom: Let There Be Carnage. This symbiote-filled follow up to the 2018 box office smash sees Tom Hardy reprise his role as Eddie Brock (and voice his alien other half). The two will face off against another comic book icon getting a terrifying, live-action adaptation: Carnage, another alien symbiote whose human side, serial killer Cletus Kasady, is portrayed by Woody Harrelson.

Directing this titanic clash is Andy Serkis, who’s not unfamiliar with breathing life into digital characters to critical acclaim: see his electrifying take as Gollum in The Lord of the Rings, bringing pathos to Caesar in Planet of the Apes. His production company The Imaginarium specializes in motion and performance capture across movies, television and video games. Outside Hardy himself, Serkis is perhaps best suited to further ground and refine Venom’s live-action appearance. And that’s exactly what we talked about when I sat down with him (virtually) to discuss the movie sequel.

You’ve a template of the Venom character to work with from the original. How have you approached the character in terms of design and movement for the sequel?

One thing when I came aboard that I was very keen to do is to establish an entirely different physical vocabulary for Venom and Carnage. Venom really is, like, an American football player crossed with a 400 pound gorilla, crossed with a killer whale. There’s a directness to that: how he attacks, how he moves. For people who are really watching out, they’ll notice that there’s a lot more integration with the environment. He has weight. You see the musculature movements, secondary muscle movements. All that stuff really plays in when he’s climbing buildings. You see the damage – the footprint if you like. You’ve got much more sense of his weight. 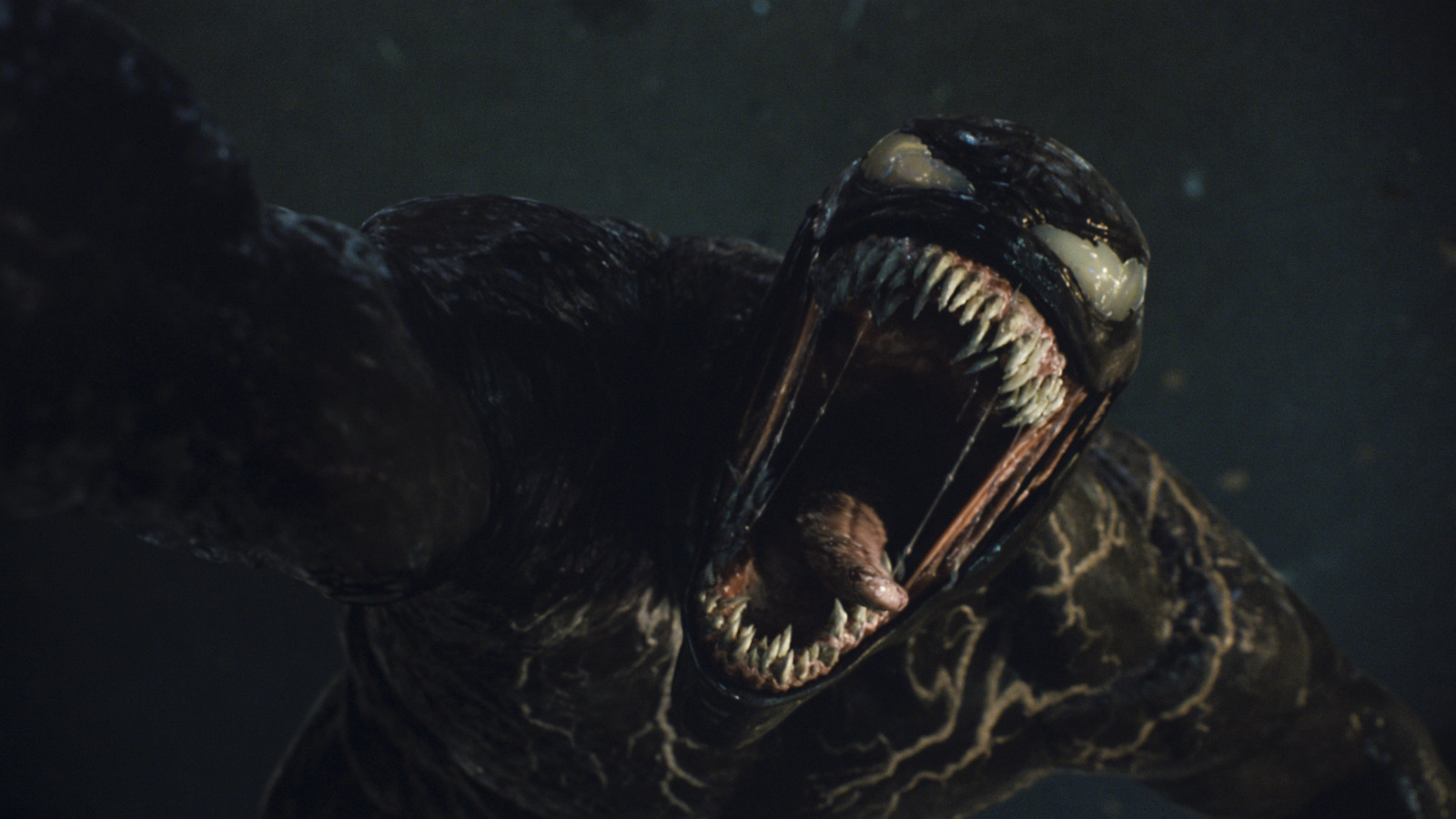 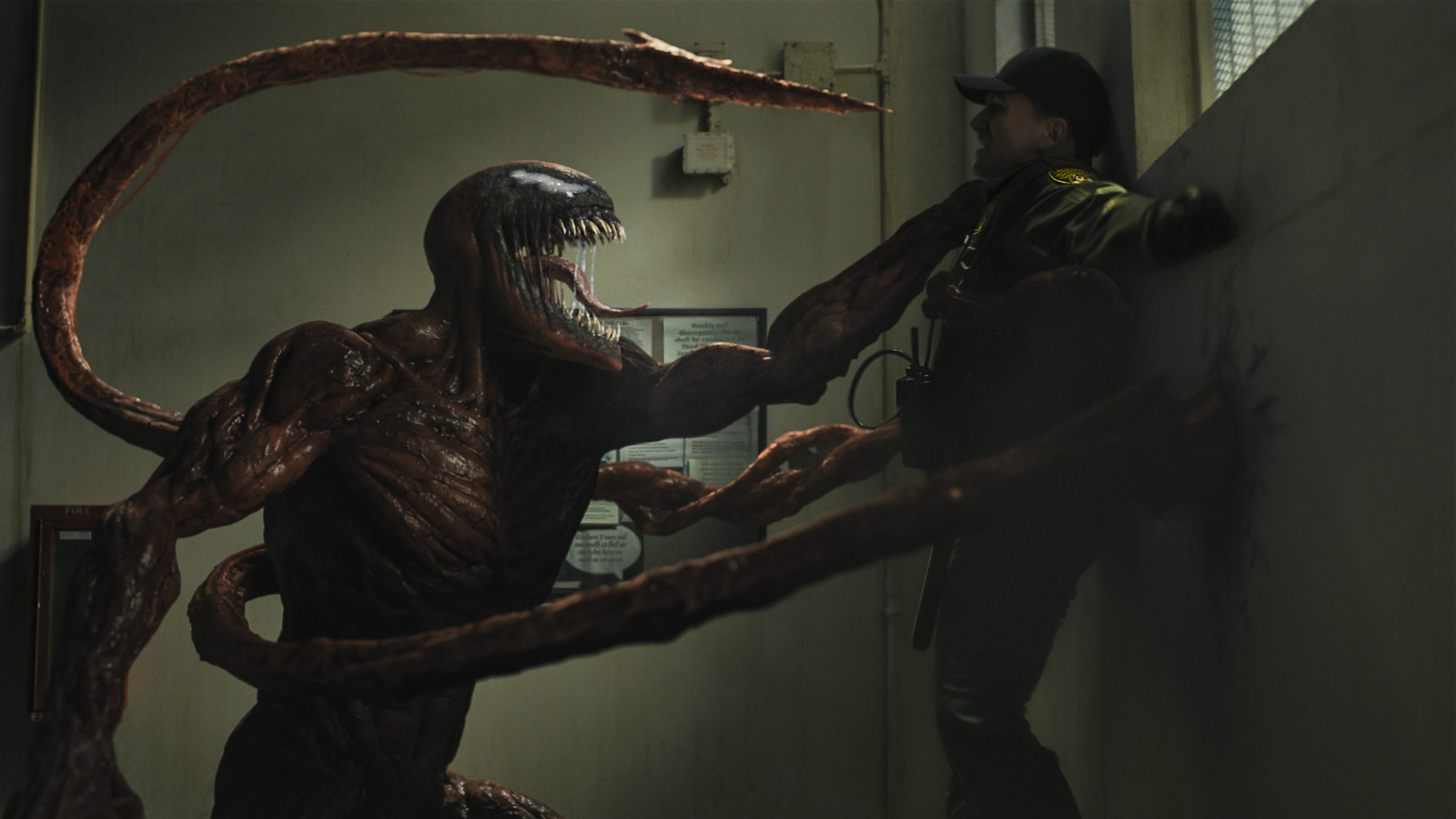 We wanted to create the opposite, which was to make him move in such a way that wasn’t so bipedal, was more left field, was a real kind of manifestation of the twisted and psychotic, idiosyncratic way that Kasady thinks and feels. Because that’s what [the symbiotes do]. They reflect the inner being of the host.

We spent some time in the preparatory phase using performance capture with parkour artists, dancers. Finding different physical ways to move the body; sidestepping, swinging. That initial kind of movement driving tendrils so they would whip around after them, so we could add that animation afterwards to the movement that we’ve created. So we can get a real sense of it being much more like a slippery squid slash octopus. He uses the tendrils to move to pull and push with, he can weaponize them.

So it’s a very different and formidable opponent. Because it’s not like two sumo wrestlers going up against each other. It’s a sumo wrestler up against a slippery octopus.

Both Tom and Woody lend their voices to Venom and Carnage. Did you use any voice modulation tech and what was your guidance for them in how to best channel their other halves?

Tom’s process in creating Venom full stop is through radio play. Before every single scene, we would record Venom’s voice. We’d just go into the corner of the studio, and he’d just run through a whole lot of takes of each line, and then we’d select a version of that. Then the sound operator would fire a line into Tom’s ear. So the whole scene was able to be played in sequence into Tom’s ear. And because Venom is an inside voice for a lot of this, Tom could really improvise and overlap with Venom.

But then Woody would prefer to hear Carnage through big speakers, because he’s a bigger character. He was taller, and he wanted to feel [it was] more external, not like a voice in his head. But you want that continuity from hosts to symbiote, which is why they lent their voices to both characters. We used a pitch modulator for both Venom and Carnage’s [voices]. 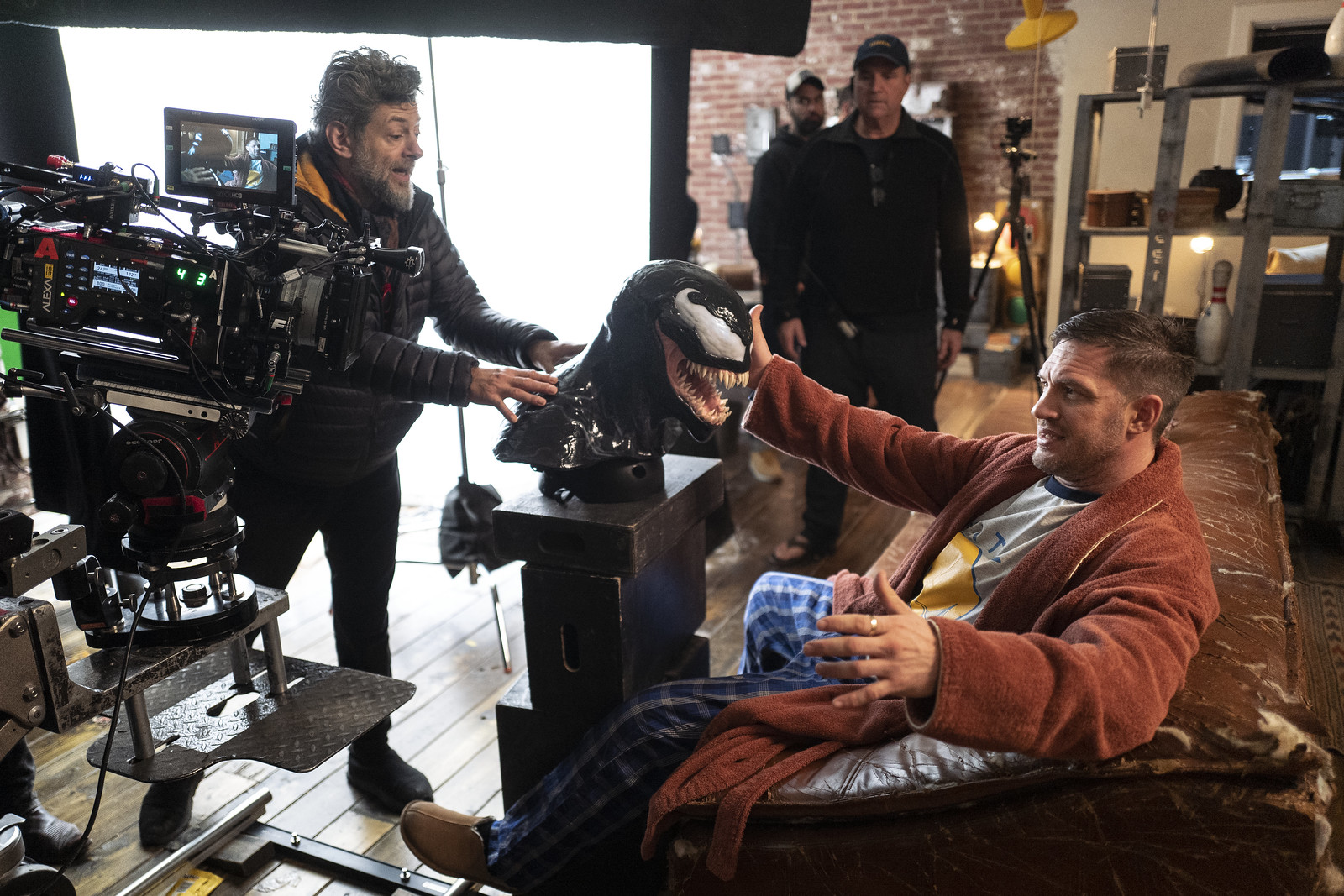 Is there any particular technology that you’ve used over the last few years, or developed for Venom specifically, that has made mixing digital characters with actors or practical sets easier?

We didn’t use performance capture. We had a reference point, a very tall guy playing Venom, smashing through the ceiling when he stood up. That was a lighting reference. One of the most important things I wanted to achieve was the integration of these characters [into the world]. They’re quite unforgiving, as they look quite cartoony – they’re comic book characters. And this has a lot to do with two people: Bob Richardson, director of photography, obviously a master, three-time Academy Award-winning director of photography and visual effects. And Sheena Duggal, head of visual effects.

So for instance, with a character like Carnage, who is so saturated, bright red. It’s a red that’s really important to get right. But you can’t have just that in a movie that doesn’t raise the saturation to meet that. The whole film in a sense was driven by the colour of Carnage. You’ll notice in this movie that the colours are a lot more saturated.

You’re not celebrating the CG character; they’re just there in reality. You want to feel they’re real. That you’re catching them on camera, rather than everything being framed perfectly. 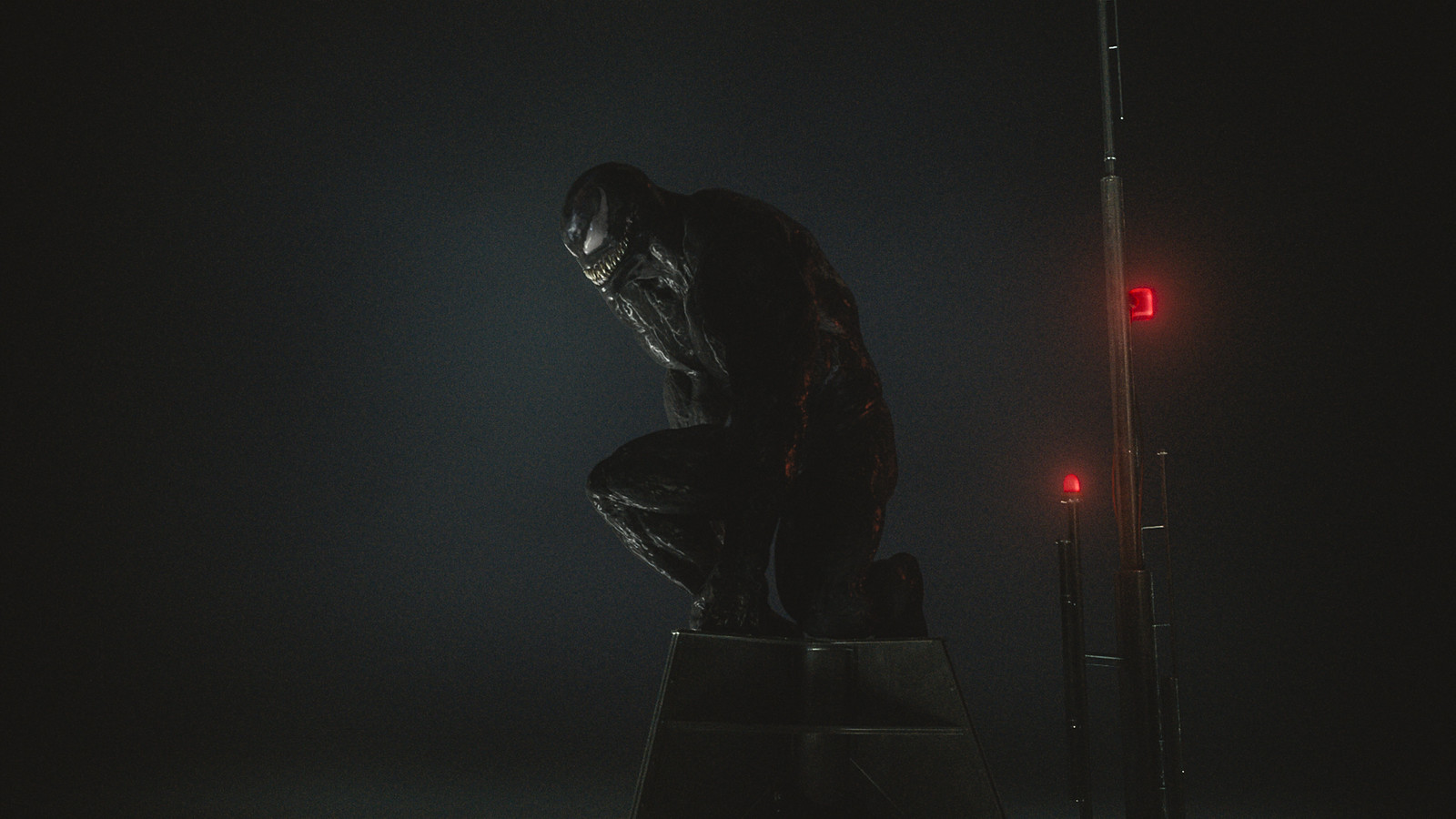 This isn’t the first time you’ve had a hand in adapting an iconic character from page to screen. Did you feel the weight of expectation again?

Of course. You always do. There are high expectations. People are very attached to these characters and they’ve all got their own opinions. They want to see their version they’ve had in their head for years come up on the screen. You have to imagine this Venn diagram of 1,000 different versions of a character that converge, then you’ve got your own version. I think what we managed to do feels pretty loyal.

Then there’s the whole question of how dark you go, and the violence, whether this should be R-rated. There is a version where it could be. You could have gone down that route. But we’re doing these stories for the biggest audience. I think we pushed it about as far as we could possibly go, without being sensationalist, overly gory or gratuitously violent. We pushed it right to the wire. 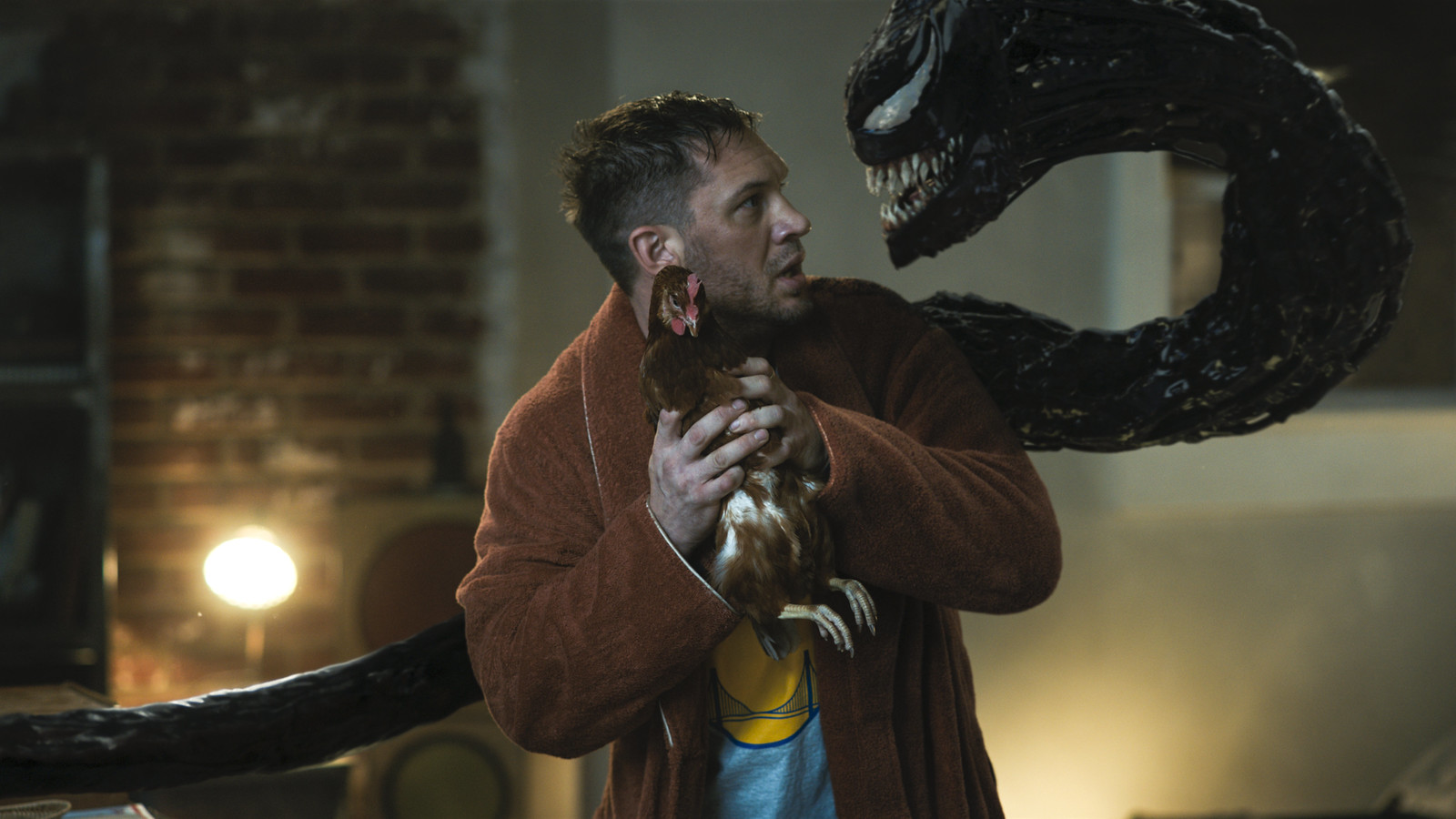 For you, what are the essential Venom traits that anyone working on the character should adhere to?

There’s two things. There’s the physicality. Then there’s what makes up the relationship between Eddie Brock and Venom. Eddie Brock is a true antihero. He is flawed, narcissistic, selfish. He’s pretty much a liar to himself and other people. Whereas Venom, who has landed on this planet, has found the perfect match. There’s almost an innocent honesty to him. An upfrontness. He has no filter. And there’s something quite appealing about Venom. Yes, he bites people’s heads off, but he doesn’t choose to: that’s just his diet. There’s no value judgment there in a way.

I think he is capable of anger and aggression, misplaced violence. But on the whole, he’s a truth teller. And in our movie, there’s this wonderful kind of comedic aspect to their relationship. It’s so complex. It’s kind of dysfunctional. But at the same time, they can’t be without each other. And they do love each other in a way, and they love what they give each other. Our story is a seven year itch moment. They’re getting on each other’s nerves, living in a small apartment. People who’ve been in lockdown can relate to that. It’s reached breaking point, but they know ultimately, what they give each other is certainly more important than what they can’t give each other.

sony picturesvenom: let there be carnage