Launching Destruction AllStars has been an amazing experience for the team at Lucid. We’re truly humbled by the community’s reception to the game and are extremely grateful for all the support we’ve been seeing on social media.

It’s thanks to the community that some of our first patches and hotfixes have been able to target and improve certain areas of the game, as well as improving our direction on future patches. Today, we wanted to run through our progress since launch as well as revealing more about the road ahead for Destruction AllStars, including our first season of content!

We’ve been responding to a wide range of community feedback around the game as fast as we can, some of the highlights of these changes include being able to earn Destruction Points from in-game challenges, adding new server regions and adding higher rarity character skins for you to further personalise your AllStars. Community feedback is important to Destruction AllStars as we’re committed to building a game that you’re excited to play, week on week.

In our last blog post, we outlined the new content coming to the game in the form of featured playlists. Over the next few months, we’ll be changing up the rules a little on our core game modes and inviting players to try a new perspective during online matches. Our first featured playlist, Mayhem 8v8, went live last week and we’ve been listening to everyone’s thoughts and impressions of the game mode whilst jumping in for a few games ourselves. Stockpile 4v4 is our next featured playlist on the horizon and we’re eager to see how you’ll all tackle the smaller, more focused team size when trying to maintain control of your banks.

Alongside our featured playlists, we’re still delivering brand new content each and every month. These include our Challenge Series which are single player experiences based around an AllStar and their Rival. They offer a small cinematic experience along with some gameplay challenges to earn some awesome cosmetics! You can learn more about our Challenge Series in one of our other blog posts.

Bluefang’s Challenge Series has just gone live. It’s time to explore more about his backstory and motivations for competing in Destruction AllStars whilst demolishing your way through the arena in his Hero Vehicle, Shredder. Face off against Bluefang’s Rival, Angelo Avello, in seven gameplay challenges and earn exclusive cosmetics including an epic skin and emote. Be sure to let us know which AllStar you’d like to see featured in a Challenge Series in the future.

Oh, and we’re hosting a Double XP Weekend starting this Friday. It’s a great chance to earn AllStar Coins and grab some of our Heroic or Legendary skins. 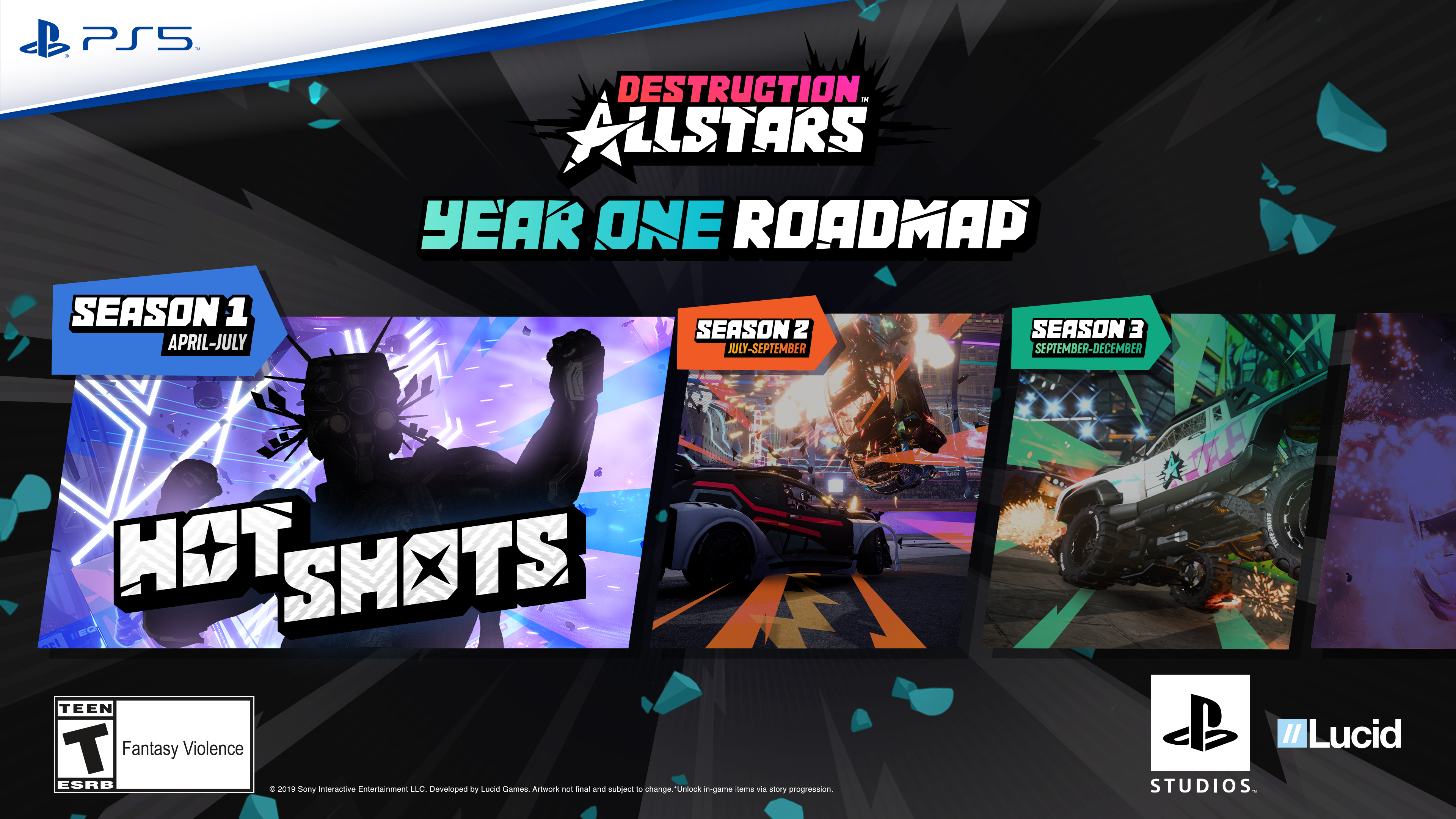 Destruction AllStars was built from the ground up to deliver content to the community at regular points throughout the year. We knew that we’d always want to be adding to the game and giving you more things to do whilst keeping old game modes fresh and interesting. To achieve this, we’ll be introducing Seasons into Destruction AllStars, starting with Season One: Hotshots.

Our first season is all about AllStars who want to be the best of the best, Hotshots who are always headline news or blowing up on social media. To give you an idea of what you can expect from this season, along with future seasons, we wanted to give you a quick rundown of what’s coming your way. We view seasons as a way to permanently enhance Destruction AllStars and leave long-lasting additions for everyone to enjoy, no matter when they choose to pick up the game. We can’t talk about everything just yet, but hopefully there’s enough in here to get you excited about our first season.

We’ll be taking the first steps towards introducing a competitive mode, often referred to as ranked by the community, in Season One! Competitive mode in Destruction AllStars is called Blitz and it’s a brand new game mode, built from the ground up for a competitive experience. It will feature a team-based structure of three players per team and four teams per match (or to simplify: 3v3v3v3). We want to take the time to properly introduce you to this brand new game mode so expect another update with a deeper dive into competitive mode in the future.

We’ll be adding a Battle Pass to Destruction AllStars in Season One. As you rank up your Battle Pass, you’ll earn exclusive cosmetic content only available in the current season. With a free tier and a premium tier, you’ll be earning rewards no matter your preference.

We’ve seen some fantastic stuff being shared on social media from all the Mayhem that’s been unfolding in the arena. It’s been a great example of the screenshot and sharing tools on the PS5 and we want to give you even more tools to really capture the carnage. Photo Mode will be coming to Destruction AllStars. In single-player modes, you can pause the game at any time and enter a free camera around the arena. The Hotshots behind the camera know how to get a perfect angle on a crash or a vault off a wall and show some personality with a variety of stickers and filters.

You might have spotted a sneaky teaser in the roadmap above… Hotshots will be adding our first new AllStar to the roster since the game’s launch. We want to wait just a little bit longer to give them a proper introduction and give you a full preview of their Hero Vehicle and abilities whilst answering the questions of who they are and what they’re hoping to achieve this season.

That’s just an introduction to our first season in Destruction AllStars. We’re really excited to be talking about the future of the game and what we’ve got in store for you. But as with all of the topics above, we’ll be back with another blog post in the future to really dig deeper into all of these brand new features and more! 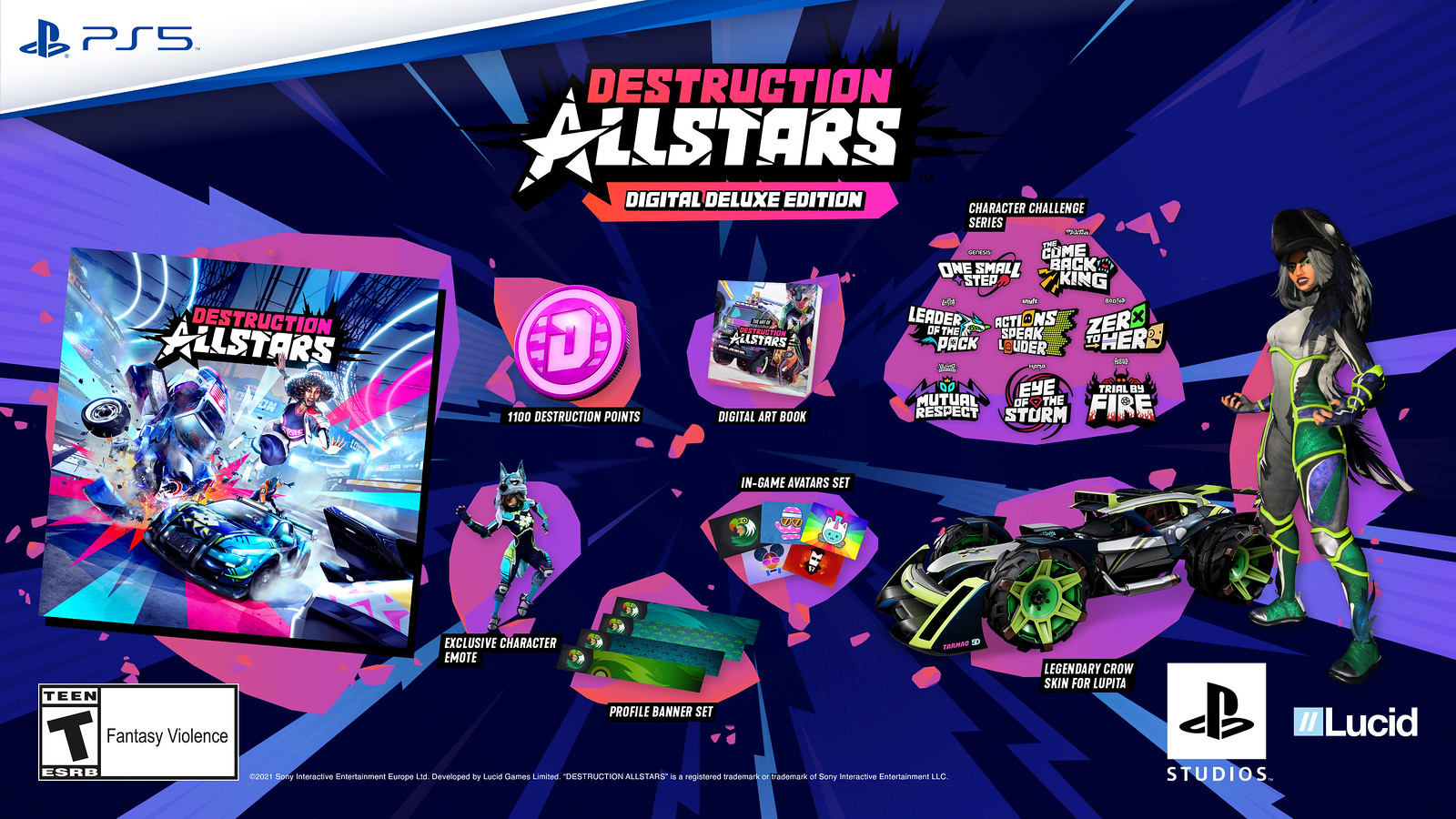 Along with the previous announcement of our Standard Edition, we’re thrilled to announce a Digital Deluxe Edition. This will include:

Both the Standard and Digital Deluxe Edition will be available for purchase from April 6.