Let’s talk about graphical updates. The team has done the painstaking work of updating the city’s environment to take advantage of the new console. Beyond improved models and materials, one of the biggest things we have brought to the game is ray-traced reflections and ambient shadows. We now have true reflections on the windows of buildings, and it looks stunning with our new skies and weather. 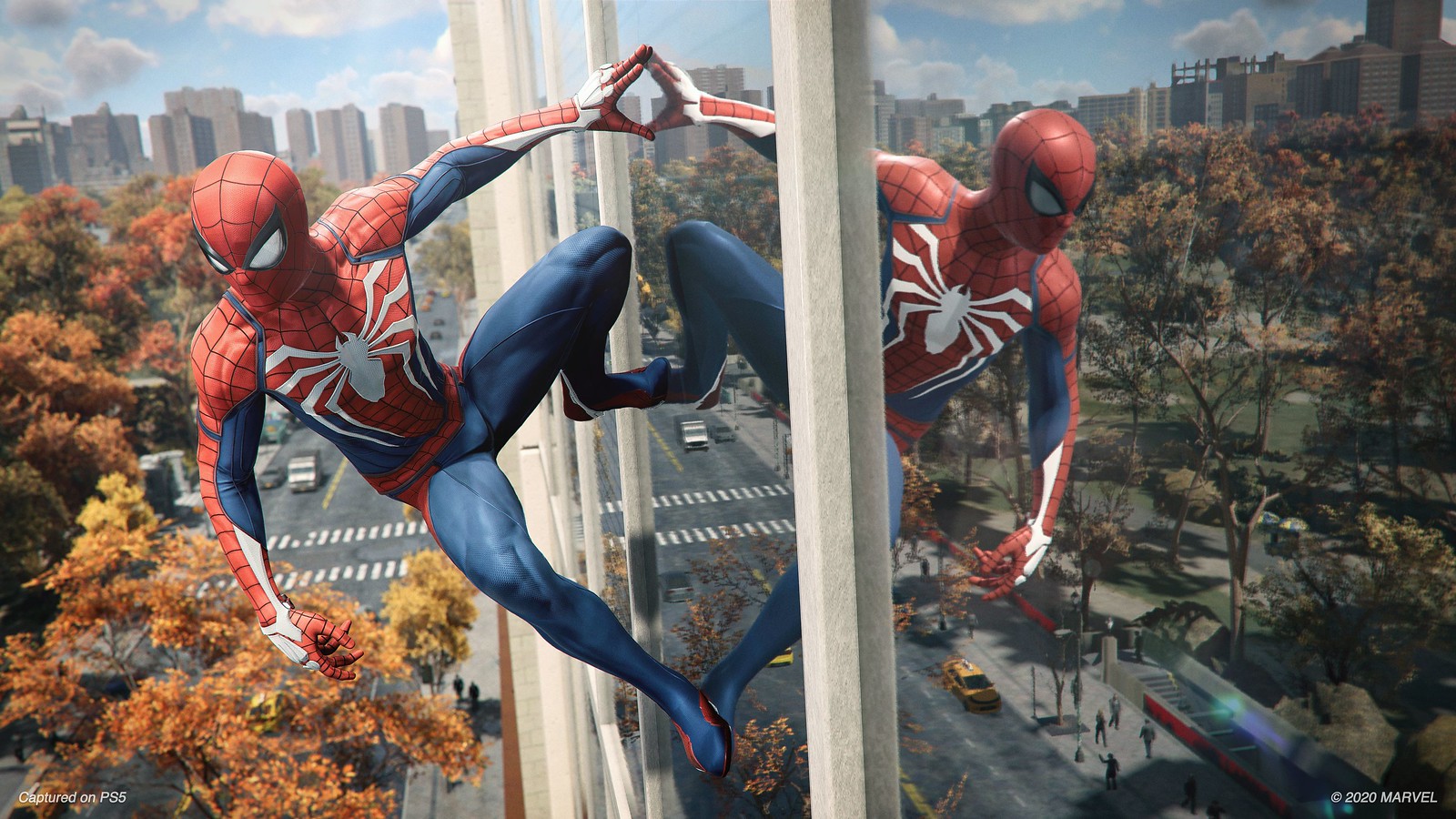 But it’s not just the environments; our characters have also gotten a huge upgrade. From higher fidelity skin, eye, and teeth shaders to individually-rendered strands of hair, the new tech and detail brings our characters and their performances to new life.

This does bring us to one of the bigger changes. In order to bring the best performances to players with our next-generation Marvel’s Spider-Man games, we have recast the face of Peter Parker. We loved working with John Bubniak on the original game; however, to get a better match to Peter Parker/Spider-Man actor Yuri Lowenthal’s facial capture, we have cast Ben Jordan to be the face model for Peter Parker on the PS5 console. He looks incredible in-game, and Yuri’s moving performances take on a new life.

Here’s a clip of one of our most powerful scenes from the first game, when Peter arrives to work to find his boss and mentor, Otto Octavius, working on the arms that will come to define him. 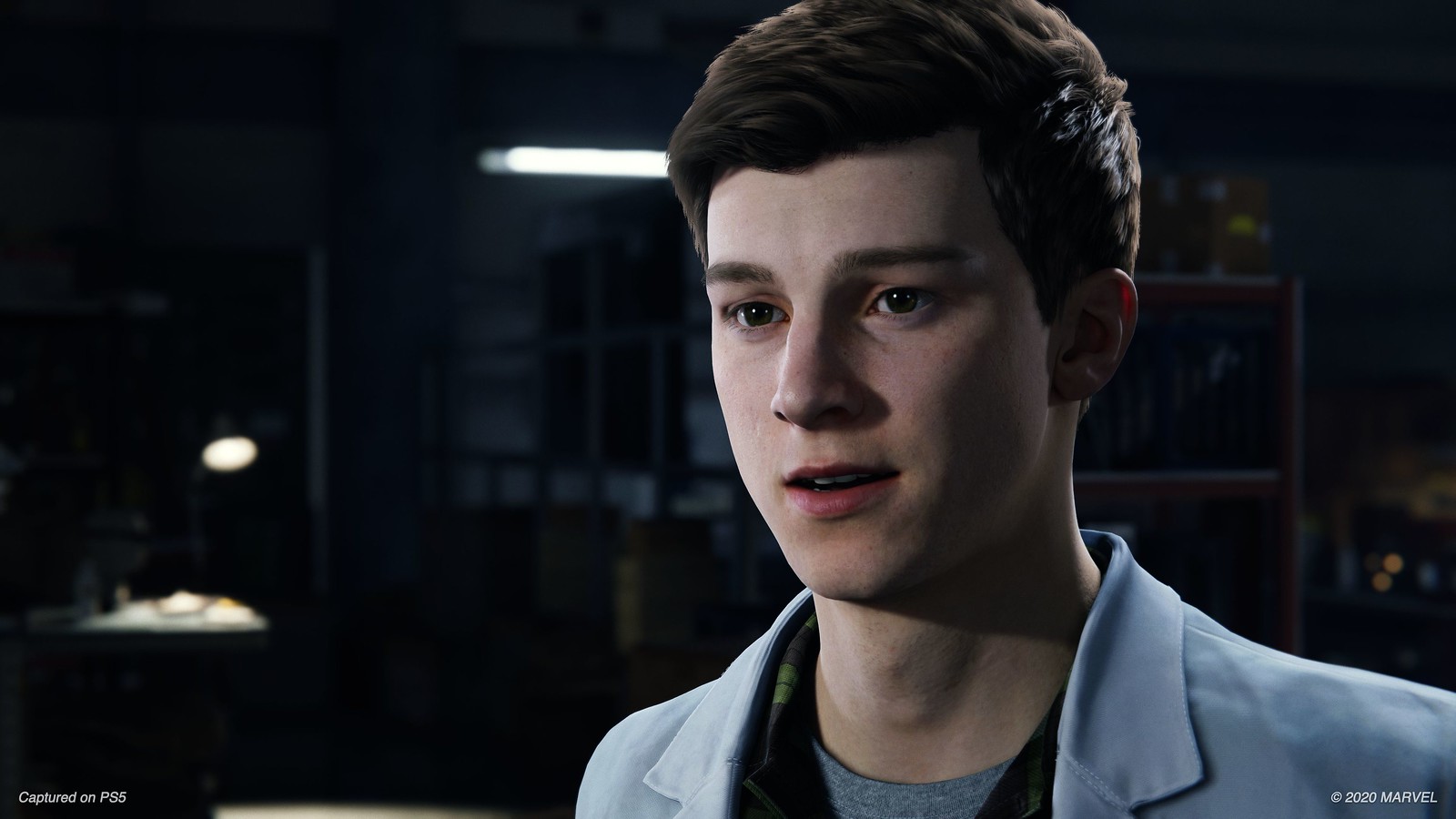 Additionally, thanks to the power of the PS5 console, we’re now able to offer a high frame rate through Performance Mode, which targets a 60fps frame rate! This allows you to experience the beginning of the Marvel’s Spider-Man storyline like never before. It feels amazing to play. Here’s a quick clip.

That’s not all! We take full-advantage of other next-generation PlayStation features like near-instant loading (don’t worry, you can turn back on those humorous fast-travel animations if you miss them), Spatial 3D Audio on compatible headphones, and the revolutionary DualSense controller’s haptic feedback and adaptive triggers.  We’ve also brought new photo mode features to the game that we developed for Marvel’s Spider-Man: Miles Morales: you can now place lights in the environment and change your Spider-Suit after you’ve lined up your shot! 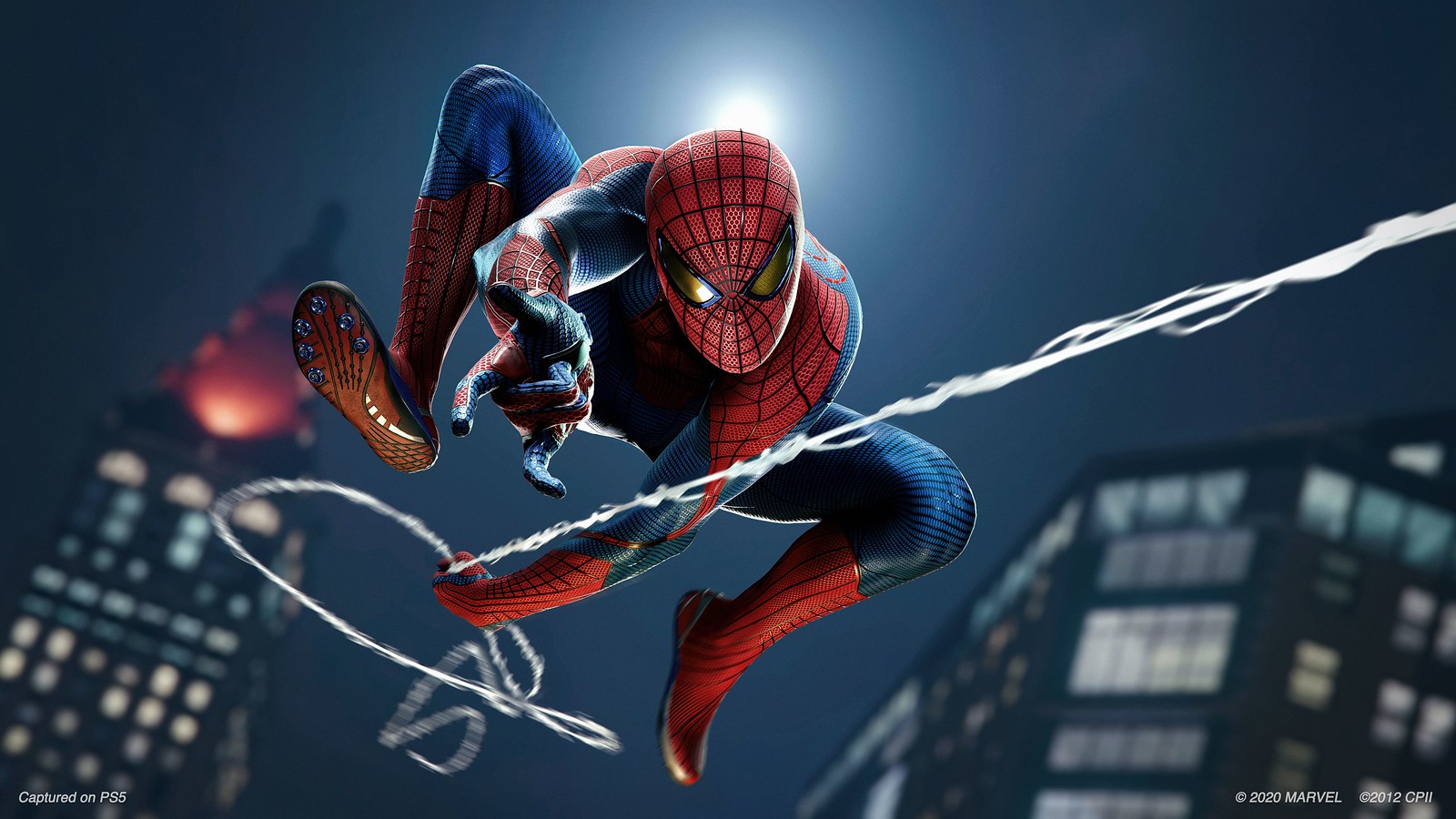 That’s right, The Amazing Suit has arrived as one of three new suits in the game. It’s the perfect suit to wear as you attempt to earn the Platinum trophy in Marvel’s Spider-Man: Remastered.

We hope this helps explain why we’re so excited for Marvel’s Spider-Man: Remastered.

Here are your various options for purchasing Marvel’s Spider-Man: Miles Morales, as well as the pre-order bonuses we are offering.

What’s in the package:

The Standard Edition of Marvel’s Spider-Man: Miles Morales will be available physically and digitally on the PS4 console and the PS5 console.  It retails for $49.99/€59.99 MSRP. You can pre-order digitally here. 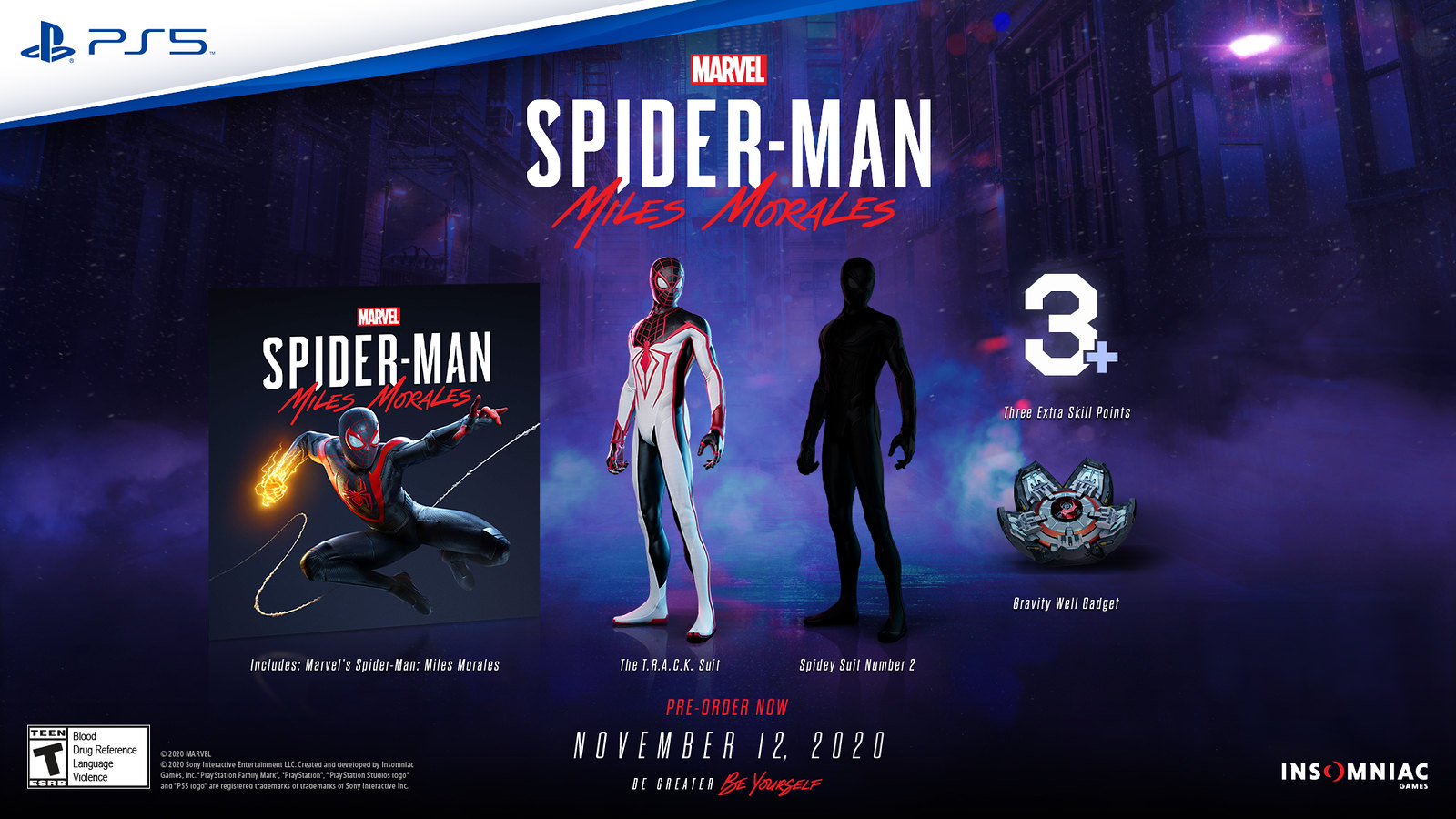 In addition, on the PS5 console we have the Marvel’s Spider-Man: Miles Morales Ultimate Edition which includes a voucher code* to download Marvel’s Spider-Man Remastered. It retails for $69.99/€79.99 MSRP and you can pre-order it digitally here. 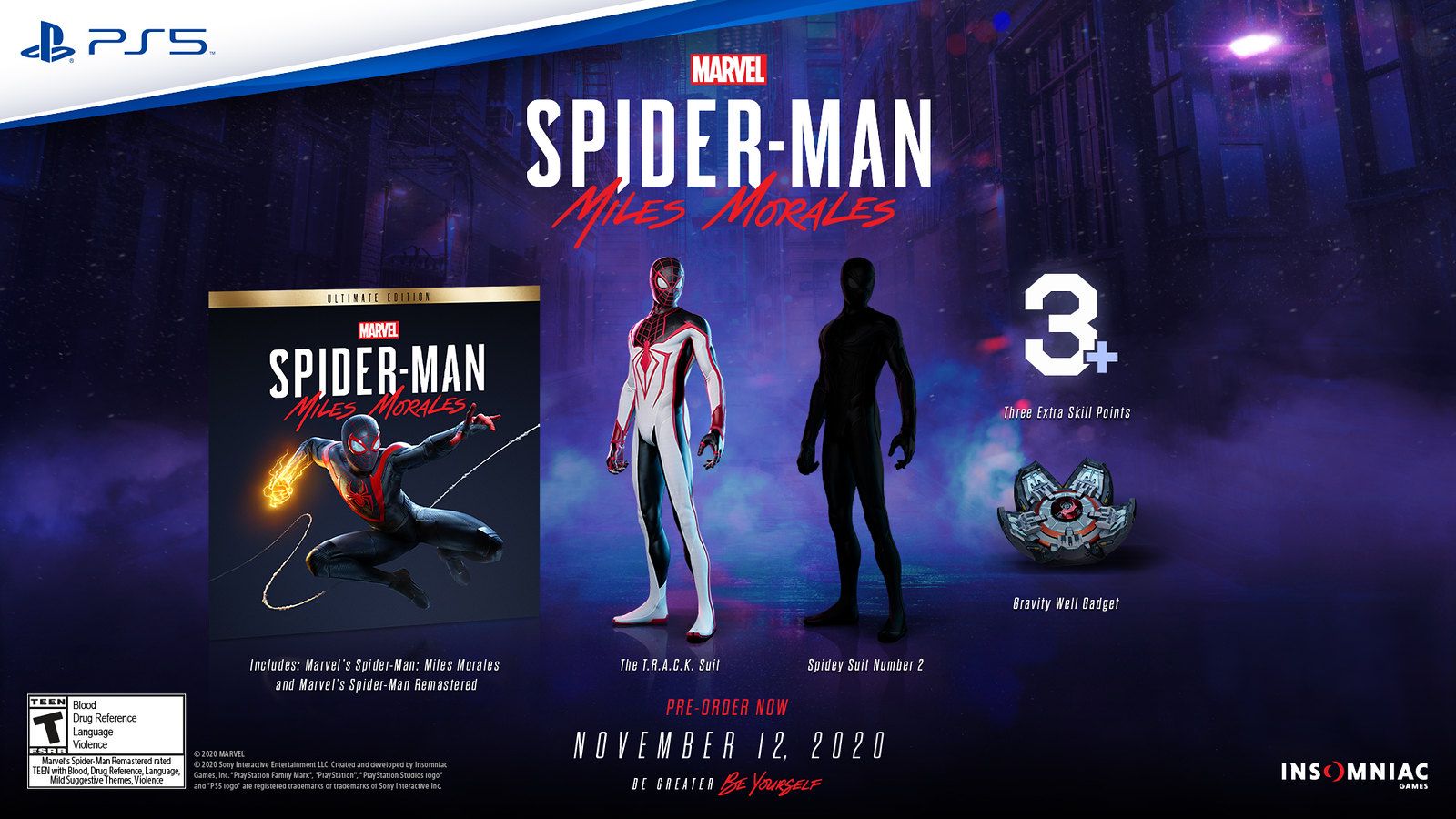 In the US and Canada only, we have additional “launch” physical editions of the game for both Standard Launch Edition and Ultimate Launch Edition (Launch Edition includes a voucher*)! These copies are available in limited quantities only so don’t delay. The launch edition includes a voucher for early unlocks of two suits, including the T.R.A.C.K. Suit by Marvel Artist Javiar Garrón, and a suit we’ll reveal closer to launch. You’ll also receive an early unlock of the Gravity Well Gadget, and three Skill Points to get a jump start on your progression.

For those buying digitally, or outside of the US/Canada, you also can receive those same early unlocks by ordering now. We’re very excited to offer a great pre-order bonus when you pre-order the game from a participating retailer or from PlayStation Store. That includes both suits, the Gravity Well gadget and three Skill Points.

We can’t wait to see the photo mode shots the community creates! And we are so excited for you to experience the continuation of the Marvel’s Spider-Man storyline when Marvel’s Spider-Man: Miles Morales launches GLOBALLY on November 12, 2020.

You’ll be able to download Marvel’s Spider-Man Remastered at the PlayStation 5 console launch when you purchase the Marvel’s Spider-Man: Miles Morales Ultimate Edition physically or digitally for $69.99/ €79.99 MSRP. We can’t wait to see the photo mode shots the community creates!

*Account for PlayStation Network, and internet connection required for code redemption. Code expires 01/01/24.
**Owners of the Marvel’s Spider-Man: Miles Morales PS4 game disc can access this offer by inserting the disc into their PS5 console. PS4 game disc owners who buy the PS5 Digital Edition disc-free console will not be able to access this offer.