How to get started in Heart of Deimos, Warframe’s third open world

How to access Deimos and get started, plus details on Necramechs and the mysterious Entrati.

At our fifth annual TennoCon held just a few weeks ago on August 1, we introduced our third open world, the grotesquely beautiful Heart of Deimos. Overrun by the Infested faction, the newly revealed moon over Mars is different from the previous open worlds. Unlike the low-rolling hills of the Plains of Eidolon or the pink and purple gaseous atmosphere of Fortuna, Deimos is crawling with the alien, horrific and dangerously uncontainable Infested, a sentient colony organism poised to take over more worlds than Deimos, unless the Tenno can stop it.

To help orient and introduce players to the Heart of Deimos, which launches today on PlayStation 4, we’ve created a primer here to answer those first questions: How do I get there? Who are these people? What do I need to know? And how can I get my hands on one of those Necramechs!

How to Get There

Like the Plains of Eidolon and Fortuna before it, the Cambion Drift node that’s part of the Heart of Deimos update is located on one of the earliest, most accessible planets, giving new players access to it relatively right away. It’s an open world, filled with a main storyline quest, constant battle, progress goals, fun resource-gathering activities, and a living breathing world populated with creatures, people, and things all endemic to Deimos.

Once players have completed the Earth to Mars Junction on the Star Chart they can assess Deimos and will be given the Heart of Deimos Quest. The new Quest will appear in your Codex. On the Star Chart, Deimos will appear where the Orokin Derelicts once were, off of Mars.

Piloting your Liset to the Camboin Drift location, you land in a location never before seen in Warframe. Crawling with giant tendrils reaching into the sky, layered with tangled webs, cords, brain hubs, and organic “flora,” the moon on which you arrive bursts with Infested life. 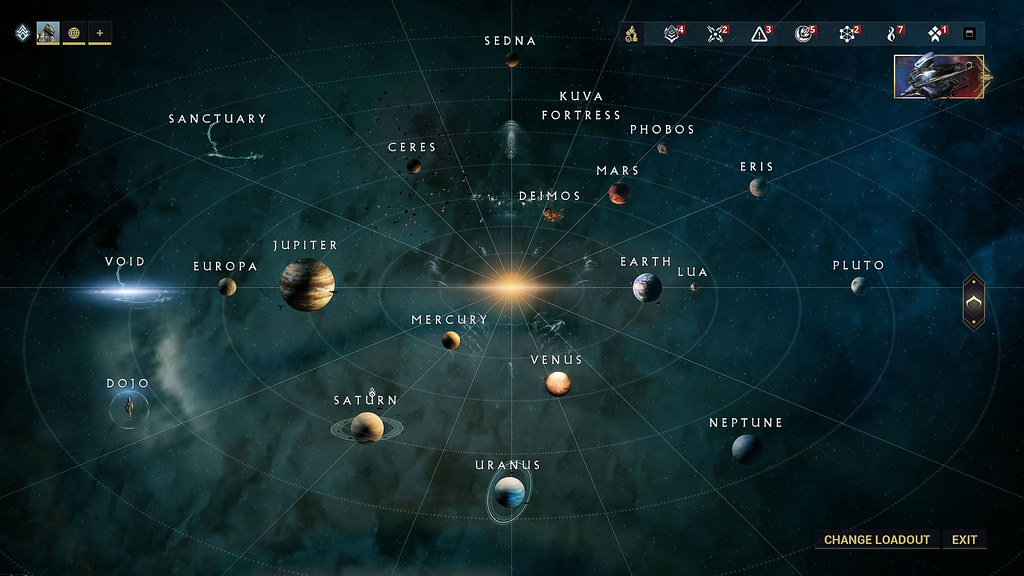 While not necessary to get there, some gameplay features are worth unlocking beforehand. Two of those recommendations include Archwings and K-Drives, which provide a faster way to get from point A to B and a gorgeous top-down look at the huge, detailed world below. We recommend spending time in both Plains of Eidolon and Fortuna to see why Deimos’ geography is so vastly different from the other open worlds. Though it’s not necessary to access Deimos, you’ll need to have completed the Second Dream cinematic quest and discovered its secrets to use the Necramechs.

The Infested: Landing on Deimos, you will discover the moon is literally scuttling, slithering, and growing with the Infested. That’s right, the Infested is the first “character” you’ll meet. The infested can take on a variety of forms, sometimes monster-like in form, other times closely resembling a hybrid of creature and plant. You’ll recognize several forms from previous missions, plus several totally new creatures from the scuttling terror of the Deimos Carnis, the powerful slam of the Deimos Saxum and the subterranean terror of the Deimos Jugulus. As you explore the planet, you’ll face off against, meet and explore dozens more totally new forms of the Infested. 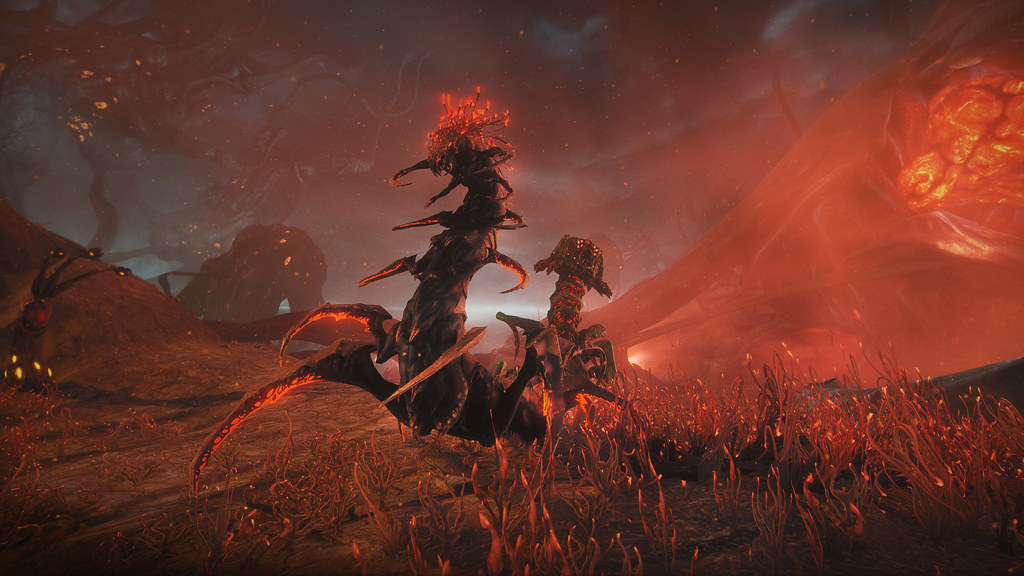 Loid and Otak: The very first talking characters you’ll converse with are the planet’s Cephalons (artificial intelligence constructs with personality), Loid and Otak. Loid is serious, logical, worried, while Otak is a bit of a joker, quirky, even naive. They’re a rich source of entertainment and relief in an otherwise dark and ominous world.

Mother and the Entrati Syndicate: There are two new Syndicates in Deimos, starting with the troubled Entrati. The first Entrati you’re introduced to is “Mother.” Disturbed, half-humanoid, half Infested, Mother is your central source for all Entrati Syndicate progress and Bounty access needs. We won’t say who else you’ll meet, but within The Entrati syndicate, you will work with others to ascend the ranks to earn rewards and the respect of this ancient Orokin bloodline. Without spoiling anything, we’ll say here that you’ll meet various characters who trade or help you earn weaponry, fishing needs, Floofs, Entrati standing, Mining (gems, ore, etc.), and other oddities.

The Necraloids: The Necraloids are the Operator Syndicate within the Necralisk. With the Necraloids, you’ll perform various resource gathering quests and activities to ascend the ranks, not to mention earning your very own Necramech.

Vome and Fass: And while you cannot talk to these “characters,” you will quickly meet Vome and Fass, the two giant Infested sibling wyrms that dominate the skyline, engaged in a constant battle for night and day. Vome’s watch is gentle, while Fass unleashes a spiteful anger upon the landscape by littering the landscape with deadly Infested enemies. 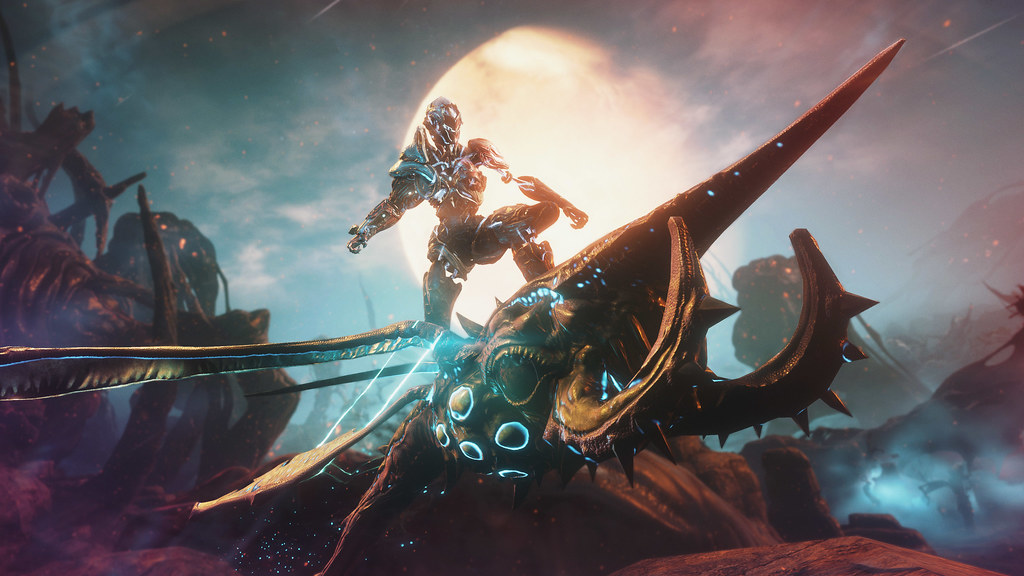 Xaku: Neither he nor she, Xaku is the wildly imaginative, community-created 44th Warframe. A composite Warframe assembled from others lost in the early Entrati Void expeditions, Xaku has mastered this power of the Void to terrify and bewilder their adversaries. Xaku’s blueprint is warned from the Quest and Xaku parts are earned from Entrati bounties.

The Velocipod: A living, Infested K-Drive, the Velocipod resembles a dragonfly that can be tamed and harnessed to command like a skateboard, or what we like to call “K-Drives.” Scattered around the Cambion Drift, Velocipods are flighty. But if you manage to catch one and mount it, you can pilot one like a temporary, organic K-Drive! AND NOW you will be able to shoot from the back of a Velocipod, just like any other K-Drive, providing it’s a secondary weapon. You can alternatively choose to ‘Conserve’ these creatures among many others, too. 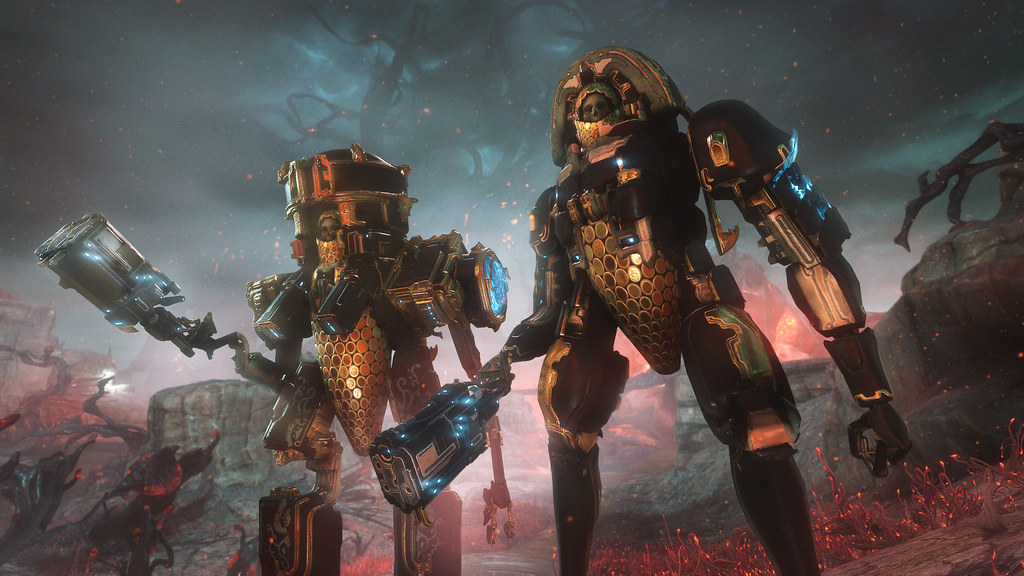 For the first time in Warframe, you will get to control a full combat mech, or what we like to call Necramechs. These Ancient Orokin Necramechs are equipped with stunning firepower and mind blowing Abilities designed to fight hordes of Infested. Just like Archwings and Warframes, Necramechs can be upgraded, improved, and customized.

While parts of these fighting machines can be seen in the rummage of old battles, your first contact with one will actually take place during the main Quest. To control one, you must work with the Entrati to take down wandering hostile Necramechs and collect components, eventually completing a full Necramech of your own. Once strapped in to your first run, you’ll want more power! You can customize it by equipping different weapons — Cortege, for example, is a life-siphoning flamethrower that only Necramechs can wield — and by tinkering with Mods to buff Ability strength, health, shields, and more to wield even more devastating firepower.

It’s got four different Abilities to unlock and play with, too. Also, the Necramech is compatible with the powerful Archguns with Gravimags installed! Available at launch in The Heart of Deimos, these powerful tools of war, once obtained, will be playable in all open worlds. Of important note: Necramechs are high-level weapons. Because players use Transference and their Operators to command them, to obtain a Necramech, players must complete the Second Dream to control them. 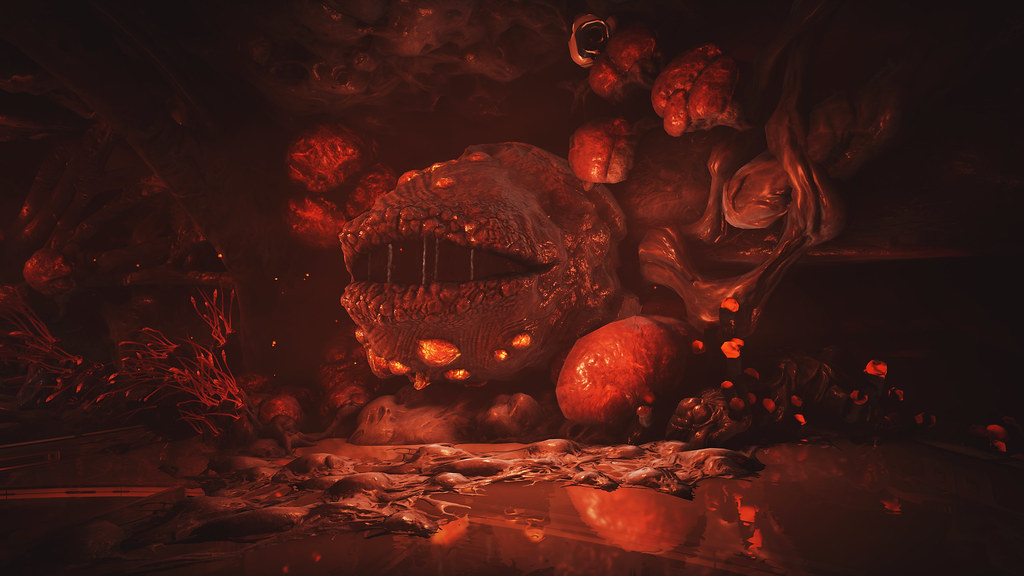 While not specific to the world of Deimos, we’re introducing the fleshed out functionality of the Helminth in the Heart of Deimos update. What exactly am I talking about? The Helminth is a new game system enabling players to customize their Warframe’s Abilities at a depth never experienced before.

The New Introduction and Tutorial

Another cool aspect of the Heart of Deimos update, but not part of Deimos is the new cinematic introduction and revised Tutorial. The New Player Experience continues the story introduced in the cinematic directed by director Dan Trachtenberg. Elements that have become central to Warframe’s core gameplay such as bullet jumping, are now part of the tutorial. Traverse the Plains of Eidolon to escape Captain Vor and begin your quest to uncover forgotten memories!

For those of you who have already played through the original Tutorial, you can play through the refreshed version by visiting the Codex Quest section under a new name ‘Awakening’ (also replayable!).

Hopefully, this gives you a good sense of what to expect in Heart of Deimos. Let us know what you think in the comments below.