PlayStation Plus Free Games for October: The Last of Us Remastered, MLB The Show 19 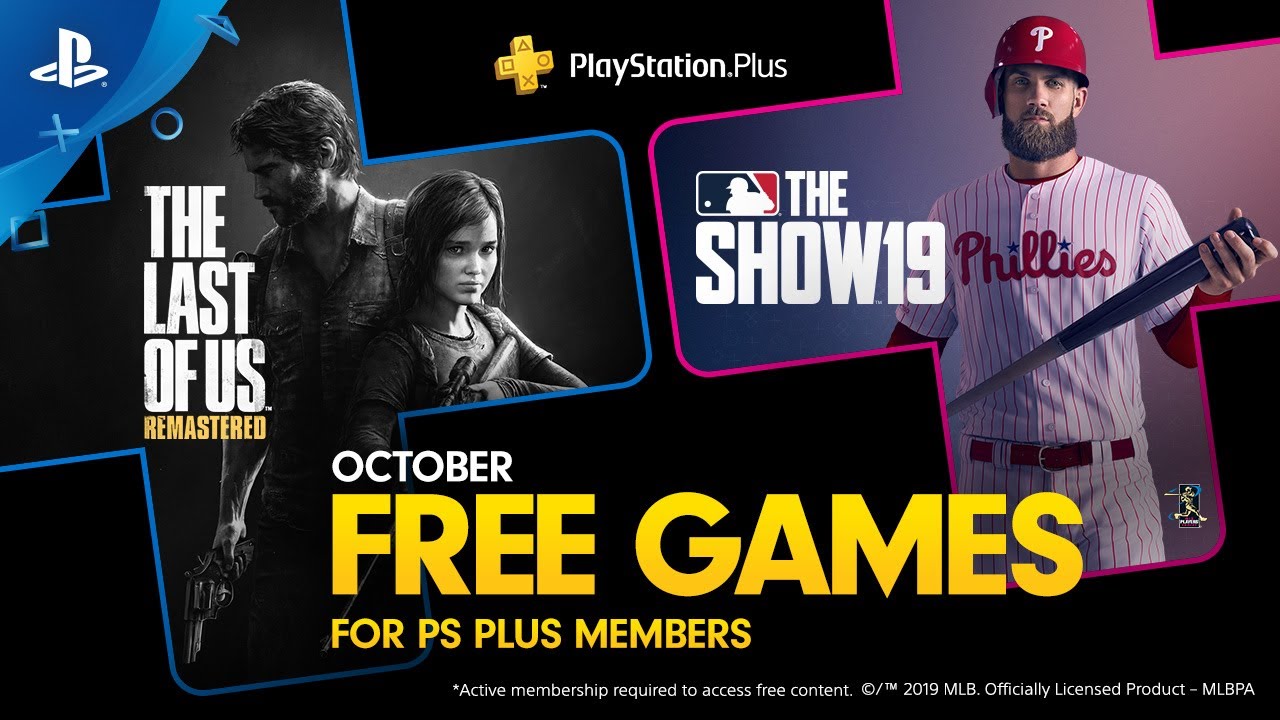 Your first look at next month's free PS Plus lineup, just revealed during State of Play.

PlayStation Plus members – we have a really big month for the October monthly PS4 games lineup to keep you entertained this fall. As announced on State of Play, we’re including two major blockbuster hits from Worldwide Studios with The Last of Us Remastered and MLB The Show 19.

The Last of Us Remastered

The Last of Us takes place 20 years after a pandemic has radically changed civilization, where infected humans run wild and survivors kill each other for food, weapons – whatever they can get their hands on. Joel, a violent survivor, is hired to smuggle a 14 year-old girl, Ellie, out of an oppressive military quarantine zone, but what starts as a small job soon transforms into a brutal journey across the U.S.

In The Last of Us: Left Behind, new light is shed on Ellie’s relationship with Riley, her best friend and sometime-mentor from a military boarding school they grew up in together. After disappearing for weeks, Riley returns with a surprising revelation on her whereabouts. Ellie and Riley sneak out of school for the last time, leading to a series of events that will forever change both of their lives.

We hope this epic adventure will keep you entertained right before the sequel hits store shelves. In case you missed it, check out all of the details on The Last of Us Part II that were announced during State of Play [Updated launch date: June 19]

Swing for the fences in the latest edition of the popular sports franchise MLB The Show 19 from San Diego Studio (SDS) – and play the sport your way. Relive the biggest MLB moments in history with Moments, where you can recreate the most famous plays (Babe Ruth’s called shot anyone?) and showdowns in baseball history. Or, speed-up full seasons with March to October, which lets you play only the biggest and most exciting games to focus on getting your team to the postseason and beyond in less time. You can also create your own player and rise through the MLB ranks with Road to the Show or play against others as baseball’s greatest stars and legends in Diamond Dynasty.

There will be new content dropping in October for MLB The Show 19, which includes the legendary Ted Williams, one of the greatest players of all time. You can also unlock rewards by reliving moments from the 2019 Postseason and the most memorable moments of all time.

To celebrate The Show being on PS Plus for the first time, SDS is also giving away free in-game content for those who download and log into the game between October 1st and October 31st. To get your Show experience started right go redeem and open five free packs. These packs include a Diamond player for your Diamond Dynasty squad and equipment for your created player in Road to the Show!

The Show 19 is a culmination of 14 years of development for the MLB The Show franchise. We can’t wait to give you a taste of what The Show 19 has in store for all PS Plus members in October.

Both The Last of Us Remastered and MLB The Show 19 will be available to download from PlayStation Store between October 1 and November 4.

In the meantime, you still have a few days left to pick up September’s PlayStation Plus titles. Batman: Arkham Knight is DC’s most-iconic crime-fighting crusader in Rocksteady’s neo-noir action adventure and explosive finale to the Arkham series, while Darksiders III is a visceral hack-and-slash action adventure that places you in a dark fantasy world filled with diverse environments, dangerous foes, hidden secrets, and weapons and abilities to unlock.

Batman: Arkham Knight and Darksiders III are available to download now until September 30.

We hope you enjoy this month’s lineup! If you’re not a PlayStation Plus member yet, now is the perfect time to join. In addition to a refreshed lineup of monthly PS4 games, members have access to benefits such as online multiplayer, 100GB of cloud storage for PS4 game saves, and exclusive PS Store discounts. For more information on PS Plus benefits, please visit our webpage.

State of Play September 2019: All the Announcements
New Trailer For The Last of Us Part II
PlayStation Plus Free Games for October: The Last of Us Remastered, MLB The Show 19
The Story of Modern Warfare
Introducing Humanity, Coming to PS4 & PS VR Next Year
Introducing the Limited Edition Death Stranding PS4 Pro Bundle
MediEvil PS4 Demo Launches Today at PlayStation Store
Civilization VI Comes to PS4 November 22
Arise: A Simple Story Announced for PS4
Wattam Coming to PS4 in December, Q&A with Creator Keita Takahashi
L.A. Noire: The VR Case Files Out Today for PlayStation VR
After The Fall Hits PS4 Next Year, From the Creators of Arizona Sunshine
Gorn Battles to PS VR This Winter
Stardust Odyssey Announced for PS VR
mlb the show 19playstation plusps plusps storeps4state of playthe last of us remastered