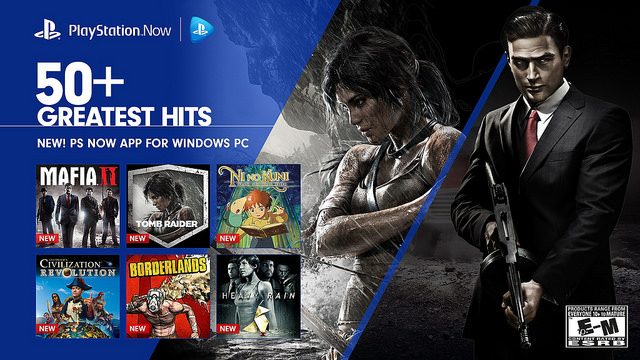 PlayStation Now is the subscription service that lets you stream hundreds of games to your Windows PC and PS4. With a single subscription, you can play more than 400 PS3 games including PlayStation exclusives, greatest hits, acclaimed masterpieces, and games for the whole family. Visit PSNow.com to learn more, download the app or explore the full catalog of games.

Every month, new games are added to PS Now so you always have something new and exciting to play. With the addition of this month’s six new games, PS Now will provide access to more than 50 Greatest Hits, including Mafia II, Tomb Raider, and dozens more. Here’s a bit of info about each of this month’s featured titles:

Every month, we add fantastic games to the service. Here is just one of the Halloween-themed games that will be included in our second annual Shocktober celebration on PS Now.

Visit our blog next month see what other tricks (or treats) we’ll have in store for you!

Last week we announced the DualShock 4 USB Wireless Adaptor, which will allow you to play PS Now wirelessly with your DS4 controller.

The adaptor is compatible with the PS Now app for Windows PC and with the PS4 Remote Play app. You can pre-order the device or pick one up when it ships in North America in early September. Of course, the wireless adaptor is an optional accessory if you choose to go wired.

To celebrate the launch of the new app for Windows PC, we’re excited to announce one last bit of news. For a limited time only in the U.S. and Canada, you can lock in savings of more than 55% off the regular monthly subscription price!

If you’re a current PS Now subscriber, you can stack the 12-Month Subscription to extend your current 1-Month, 3-Month or 12-Month subscription to lock in the savings for a full year to come.

If you’re new to the service, we hope you’ll consider using the 7-Day free Trial before you buy. You’ll get full access to all 400+ games in the PlayStation Now Subscription through both PS4 and the new app for Windows PC. Click here to start your 7-Day Trial.