It’d be fair to say that, as a gaming genre, comedy has always been an under-explored one. While a staple of film and literature, gaming has rarely gone further than wise-cracking characters, pop-culture references, and shameless punning in its pursuit of entertainment.

I sat down with Senior Producer Jason Schroeder backstage at E3 last month to ask him how he and his team are tackling the challenges of working with two such prolific comedy writers.

“They’re really, really involved,” Jason says of Stone and Parker’s connection to the project. “We have daily calls and I’m down there a few times a month just constantly trying to make sure that they’re getting the comedy they want into the game and making sure that it all makes sense moment to moment.

“They’re both gamers, so there’s a really easy common language,” he continues.

“However, deadlines and pressure are actually some of the best ways they get their comedy. Separate from the game, they truly make each episode of South Park in just six days. It’s from that pressure that they get their really relevant, really timely jokes. The video game cycle, by comparison, is brutally long for them.”

There are clearly hurdles in finding the common ground between gaming and TV comedy writing, but Schroeder is keen to emphasise his dedication to the source material. 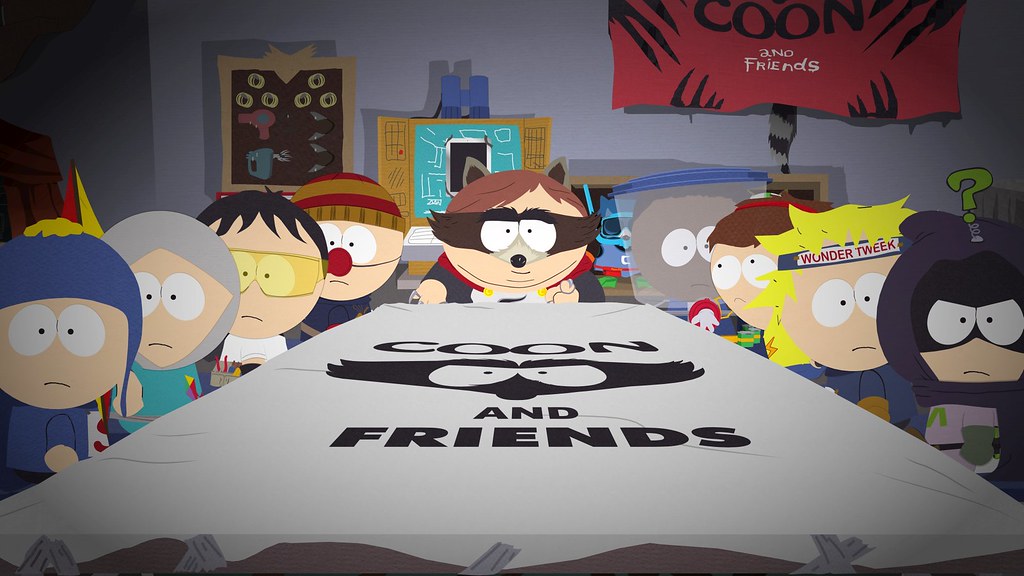 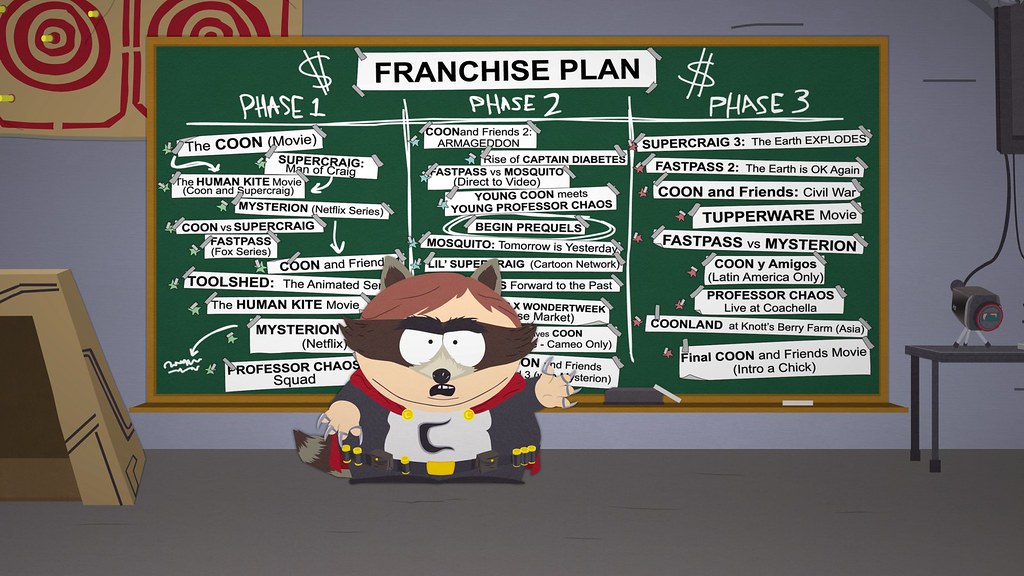 “My aspiration is to make sure every South Park fan gets an unedited Matt Stone and Trey Parker experience.

“We always want to try and make sure to get every joke in that we can. Sometimes we have to ask the guys ‘Okay, do you want that to be a gag or do you want it to be a whole system? Should we build this in as a dynamic part of the game or do we want it to just be something that happens?'”

And this seems to be the biggest obstacle for the team — comedy is largely about timing and the difference between a 25-minute TV episode and an 8 to 12-hour game can change a lot.

“Sometimes people will have fun with a joke for five minutes but if you try to build a whole level around it they might feel like ‘Okay, I got the joke the first time and it was funny but I’ve been doing it for an hour now.'” 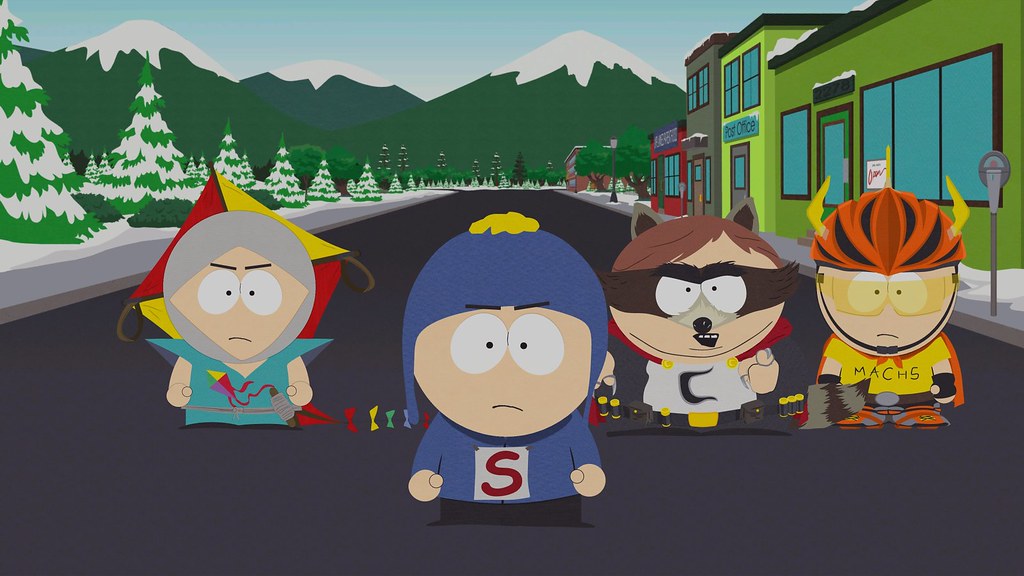 One thing that stands out as we’re talking is Jason’s enormous passion for the South Park universe and the writers’ quirky sense of humor. I asked him how it felt to be such a big fan of the series he was working on.

“18 months ago, I got my first hand-delivered paper script while I was down at their office and I was thinking to myself ‘I don’t want to read this, it’s going to be full of spoilers.’ It was this very genuine fan moment and I had to say to myself ‘Well, I guess it’s my job — I’m going to have to read this thing 100 times over.'”

It’s always a gamble turning something you love into a living — does Jason worry that spending so much time with the characters might affect his passion for the show?

“When you do an E3 demo you play the game over and over and when we left at the end of the week, the team was still laughing at the jokes — it’s just been a ton of fun.

“In our theater yesterday we had one of those really just contagious moments of laughter: someone was laughing and then that made the person sitting next to them start laughing, then our demonstrator cracked up. Tears were running down their faces because the jokes just kept coming and coming.” 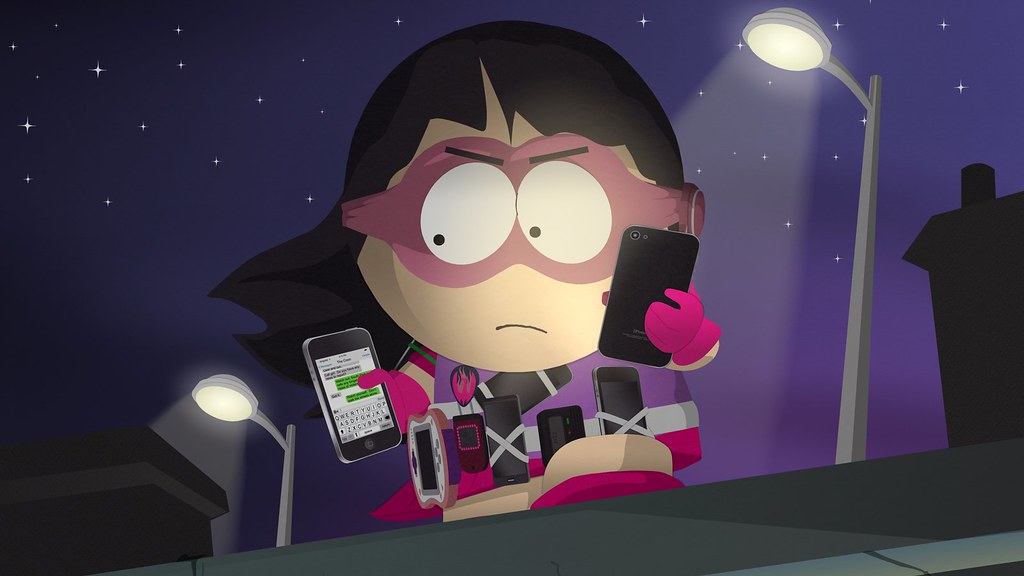 Looking around the E3 show floor, with its heavy emphasis on action, drama, and conflict, it’s clear that the comedy genre is still very much uncharted territory for most game developers.

“Comedy games definitely have room for growth,” agrees Jason. “One of the things that we’ve discovered is that you can really make people think with a comedy game because you’re able to subvert their expectations. Even the typical way they might do things on a PlayStation controller: we say ‘Pull the triggers and start rotating the analog sticks’ and then they see on screen that the kid is moving his butt around.”

South Park creators Matt Stone and Trey Parker are well known for courting controversy with projects, often pushing the boundaries of whatever medium they’re working in. Jason was keen to assure fans they can expect more of the same from South Park: The Fractured But Whole.

“There’s hopefully going to be some stuff in there that people will say ‘How did that make it through classification?'”

You can find out exactly what he’s getting at when South Park: The Fractured But Whole launches on PS4 December 6.