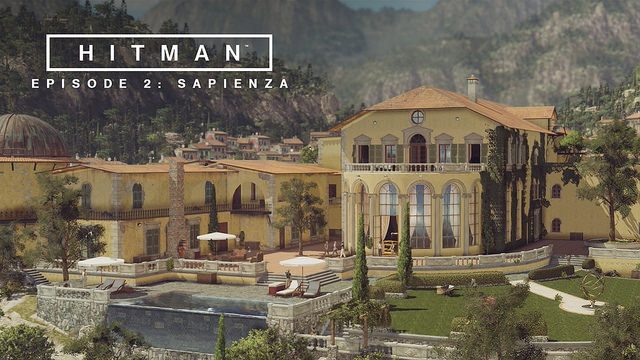 With a whole town to explore, Sapienza really gives you the feeling of needing to plan your hit. There are locals getting ready for work, others relaxing on the beach or fishing in the harbor, and doing some shopping. Many more are visiting the San Giorgio church or watching street entertainers. Sapienza has its own idyllic rhythm and 47’s ultimate task is to complete his objectives without anyone knowing about it. Subtlety is the mark of the true professional.

Those objectives are simple: eliminate Silvio Caruso and Francesca De Santis and destroy their scientific research. If you want to know more, Diana has been trusted with the specifics, as always.

Hitman Live Content will also continue with Episode Two. We’ve added new content to the game every week since we released the first episode on March 11, and that continues with Episode Two. You’ll be able to create your own contracts and play Featured Contracts that were created in Sapienza as well as play our popular Escalation Contracts. Within the next few weeks, the first Elusive Target will also be available, although we’re not promising that they’ll turn up in Sapienza. We’ll let you know, so keep your eyes and ears open.

Alongside Sapienza comes a sizeable game update that adds a host of improvements to the game for all players. Significantly improved loading times, new options for the HUD and Challenges, menu tweaks and updates — plus a whole lot more. Take a look at the full release notes for all the details.

The second target from The Sarajevo Six is also available with the launch of Episode Two. Gary Lunn, also known as “The Enforcer,” has been located in Sapienza, where he is currently working at the Ether corporate bio lab where he is supervising high-level security efforts. Lunn is a highly trained professional and can most likely be found moving around Villa Caruso or the bio lab.

PS4 players have exclusive access to these six bonus contracts that tell a self-contained side-story revolving around former members of a paramilitary unit called CICADA. A new target will be available with each new location, so we’ll have details on the third target when Episode Three takes us to Marrakesh.

Anyone who owns the Full Experience will already be able to see Sapienza listed as a new destination in-game. If you own the Intro Pack, you’ll need to purchase Episode Two separately or buy the Upgrade Pack to also get all future episodes.