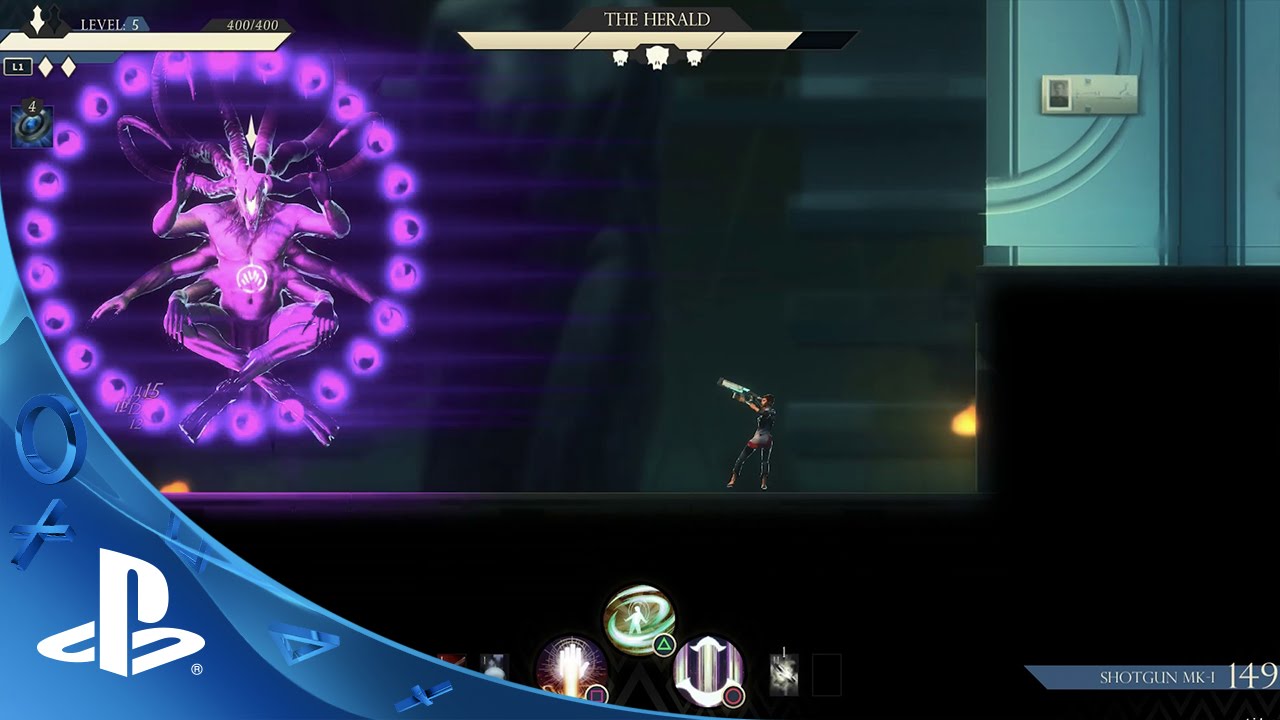 Hello PlayStation fans! My name is Daniel Leaver and I’m delighted to be posting here once again. You may have heard of Dreadbit’s previous game, Ironcast, but today I’m proud to announce something entirely different: Seraph, coming to PS4 in 2016.

Seraph is an acrobatic platforming shooter with a unique twist: all weapons are automatically aimed by Seraph, our title character!

That’s right, Seraph will aim at the demon-spawn of hell for you while you focus on snapping off controlled bursts of gunfire as you backflip from walls and tumble through the air. It’s high-octane platforming action without the limitations of aiming.

“But, Daniel, what is this madness? How can you possibly have a skill-based shooter without aiming?” I hear you cry. Well, having grown up with mind-blowing action films such as The Matrix, Christian Bale’s Equilibrium and, of course, anything directed by John Woo, I’ve always dreamt of playing a video game that could truly deliver on the promise of the player becoming a dual-handgun-wielding-badass! There have been some games that came close, but it always felt to me that the slick acrobatic choreography often came second to the player having to aim at the same time. A task made even more tricky if aiming two weapons at different enemies!

So, I thought, why not ditch the requirement for the player to aim altogether and instead let them focus 100% of their attention on acrobatic evasion and, of course, accurately landing Seraph’s divine special powers? Seraph effortlessly aims her dual pistols at the oncoming demon hordes while the player shoots, flips, and dodges the rapidly moving unholy spells and attacks. The thought turned into a playable prototype within a few days… and we were utterly convinced. 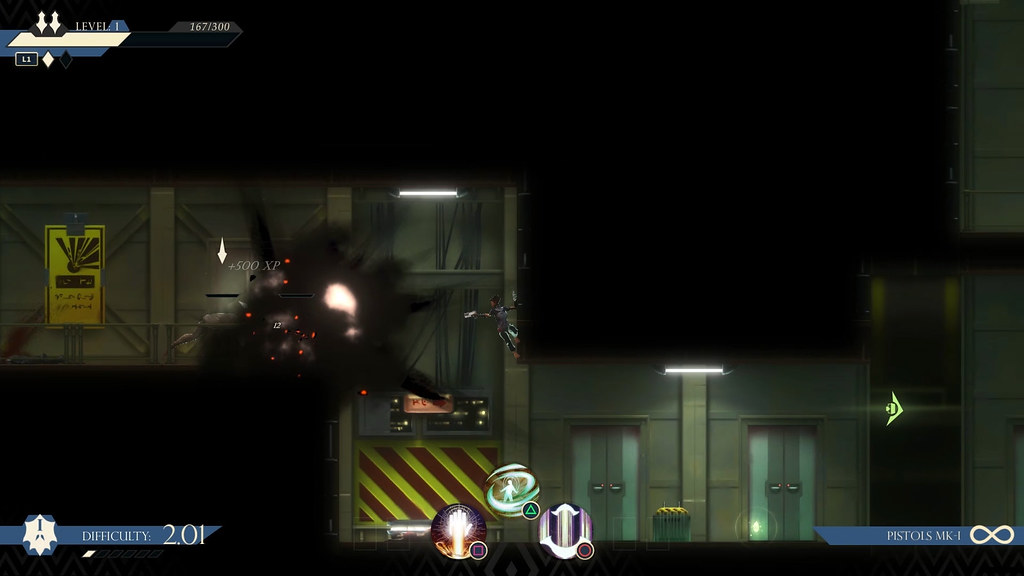 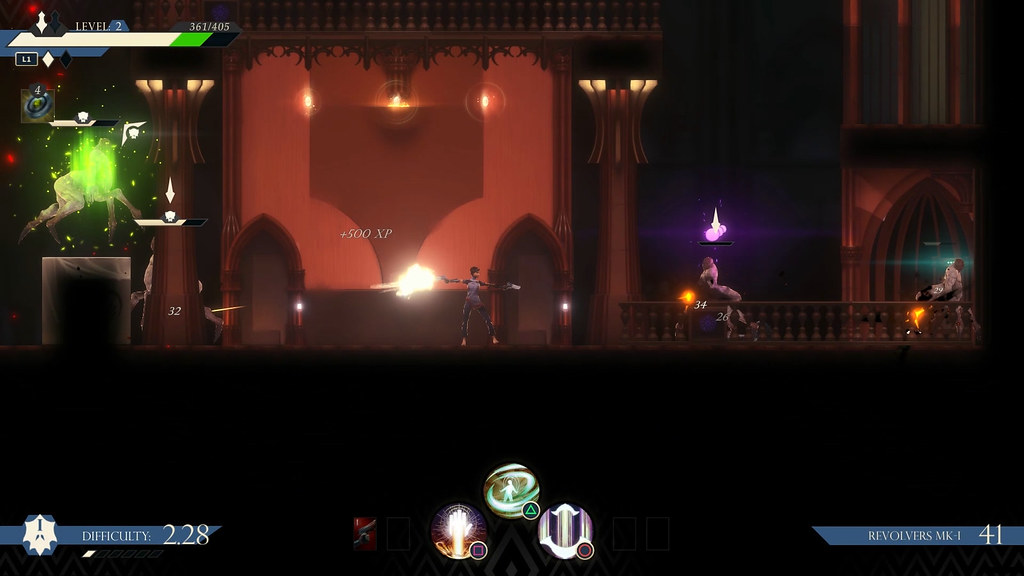 “But, Daniel, if you don’t aim isn’t the game just easy-mode-auto-win casual fodder?”

This is what playing Seraph is all about — looking and feeling amazing.

In addition, Seraph also features an on-screen, dynamically scaling difficulty rating, so it will always match your ability level. The better you play the harder the game becomes! But don’t worry, the higher the difficulty rating the greater the rewards dropped by slain demons for our crafting and upgrade systems. 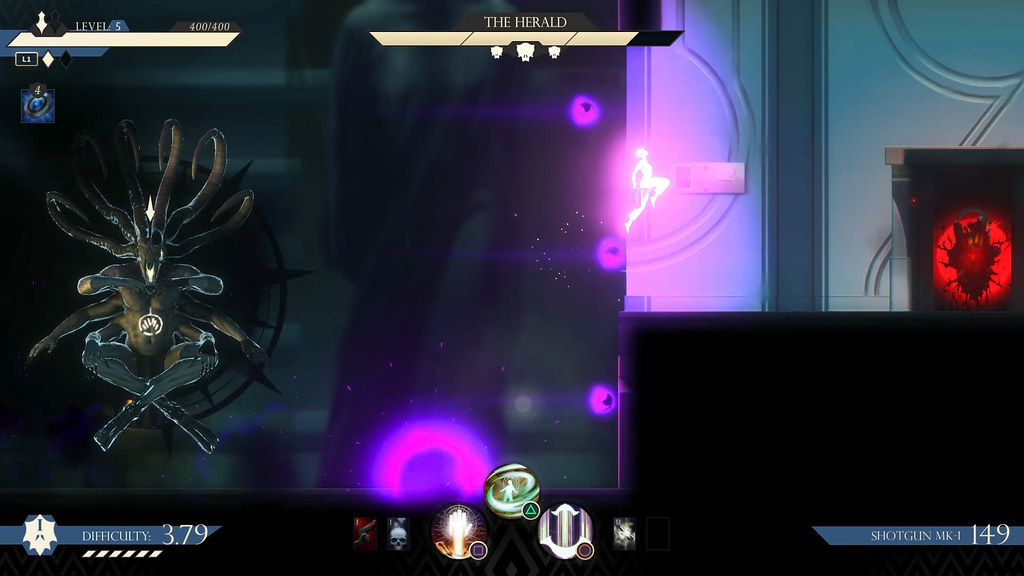 There are tons of unlocks, daily challenge modes, and special Twitch streamer features we’d love to talk about more but I’m out of time.

Thanks for having me, PlayStation fans! Why not drop some questions in the comments section below and I’ll get right back to you?