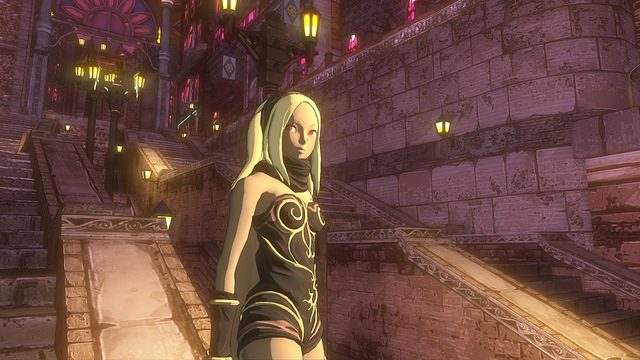 Gravity, ghosts, and gunplay! It’s a huge week in the world of PlayStation with more than 10 new games launching this Tuesday. Leading the pack is a familiar (and still exhilarating) adventure: Gravity Rush Remastered on PS4.

Gravity Rush Remastered follows the mysterious young hero Kat and her incredible, gravity-defying powers. Traverse a beautiful city in all directions with full 1080p HD visuals, performance improvements, and — of course — DualShock 4 support. As a bonus, all the original DLC packs from the PS Vita version come packed in the Remastered edition.

And that’s only the start! Also out this week is the foot-tapping, sword-swinging dungeon crawler Crypt of the NecroDancer. Explore fiendish labyrinths and time your journey to the beat of the music! Or if you want something a wee bit edgier, look no further than Not A Hero — a gritty shooter from the team behind OlliOlli.

For the full list of new games coming to PlayStation, read on. And enjoy the Drop!

Enter the AI arena and fight evil artificial intelligences with a variety of weapons and modifications. AIPD is a top-down, co-op, twin-stick shooter. Enjoy thousands of possible combinations of enemy and arena permutations that give you an unprecedented and nearly unlimited arcade experience.

An odyssey through the galaxy where physics-based space-flight and platforming action blend seamlessly together. Explore a colorful universe filled with amazing discoveries, alien races, and fashionable hats. Unfortunately, your only company is ZING, a navigation computer with no memory of your whereabouts and a slightly faulty social circuit.

Crypt of the NecroDancer is an award-winning hardcore roguelike rhythm game. Move to the music and deliver beatdowns to the beat!

Celebrating its 15th Anniversary, the Digimon franchise makes its faithful return to PlayStation in true RPG form in Digimon Story Cyber Sleuth. Scan, raise, and train your faithful Digimon companions to battle by your side in classic, turn-based battles.

Gain a new perspective as Kat, a strong-willed girl trying to protect her future in a world that’s crumbling to pieces. With incredible gravity-altering abilities, Kat is the only one who can salvage the floating city of Hekseville — if only she could remember who she is…

Play as Hulk, Iron Man, and Spider-Man to defeat Sandman and the Abomination who have taken over Grand Central Station. Fire off Iron Man’s repulsor rays and missiles, use Spider-Man’s spider-sense and web-slinging abilities, and SMASH as the Hulk!

Release date has been updated to a future date, so this title has been removed from this week’s lineup.

Neptune’s adventure is now going out of this world and entering the world of Platform Zero. Gamindustri has entered a precarious season known as the CPU Shift Period. During this time of social unrest, deprecating rumors about the CPUs have begun to saturate Gamindustri. Neptune and the others worry the citizens will soon call for new leaders to replace them and that their rule will end.

The greatest heroines of the Nitroplus visual novels come together in a battle royale! Choose from 12 core characters (plus two DLC characters), bring any two of 20 partners, and build up your Power Gauge to unleash your awe-inspiring Lethal Blaze!

Not A Hero
PS4 — Digital

​When an anthropomorphic rabbit/mayoral candidate from the future named BunnyLord needs a murderous loner to clean up the city during the election, Steve heroically offers up his dubious skills with a gun and lack of self-preservation instinct to this mysterious stranger from beyond.

The castle needs a hero as hordes of trolls are surrounding it! Build towers, save money, learn spells, and keep the enemy away! Follow the exciting story of the dwarven kingdom’s eternal struggle against the troll hordes, who want only to crush the dwarves and claim their territory.