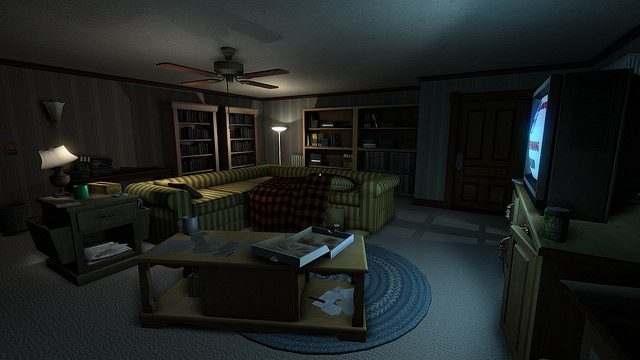 It’s dark, lonely, and an empty house that was once familiar now feels foreign. As you wander the halls and explore each room, more of your family’s history is laid bare before you. Where is everyone, and what happened here?

The critically acclaimed, first-person story Gone Home is coming to PS4 this week. What a way to start the year!

Gone Home: Console Edition brings the beloved adventure in all its mysterious glory, with more than 90 minutes of developer commentary to sweeten the deal. If you never walked the dark halls of Gone Home, please accept a word of advice: don’t read anything else about it. The less you know before playing, the better!

But that’s only the beginning of our first new games lineup of 2016. Command a mission to Mars in the boardgame-inspired Tharsis, sneak through sand and wind in Assassin’s Creed Chronicles: India, and lead your soldiers to victory in The Banner Saga.

For the full list, read on. And enjoy the Drop!

For years, the Humans and the Deimos have been at war in their struggle to capture the Great Spirit Stones. To the Humans, the stones represent a magical source of power and light. To the Deimos, the stones are the viable force behind their spell-casting abilities. But fate is about to place the future of both races in the hands of two men.

An exciting collaboration between The Heroic Legend of Arslan anime and the action-infused Warriors series. The exhilaration of plowing through large armies has been fused together with the charm and style of the world crafted in the anime.

Assassin’s Creed Chronicles: India throws you into the tension between the Sikh Empire and the East India Company in 1841. When a Master Templar arrives with a mysterious item that used to belong to the Assassin Order, Arbaaz Mir must discover why he’s come, steal back the item, and protect his friends and his lover.

The Banner Saga is an epic role-playing game inspired by Viking legend. Hand-painted landscapes portray a world eerily suspended in perpetual twilight. Cities and towns begin to crumble into chaos. Heroes abandon their hearths and homes to traverse the snowy countryside, gaining allies along the way to help battle a strange, new threat.

Dogchild narrates the story of the young and enigmatic Tarpak, an impulsive and brave guy with extraordinary abilities: a strong sensory union with nature and a special symbiosis with his inseparable dog, Tarao.

You arrive home after a year abroad. You expect your family to greet you, but the house is empty. Something’s not right. Where is everyone? And what’s happened here? Gone home is an interactive exploration simulator. Interrogate every detail of a seemingly normal house to discover the story of the people who live there.

The battle for suburbia grows to crazy new heights in Plants vs. Zombies: Garden Warfare 2! In this hilarious, action-packed shooter, zombie leader Dr. Zomboss has strengthened his horde and rebuilt suburbia as a zombie utopia. But hope remains, because for the first time the plants are taking the offensive in an all-out attack to reclaim their turf.

Tharsis is a turn-based strategy game about humanity’s first mission to Mars. It’s an important mission, and not just because of its potential to greatly increase our knowledge of the red planet. No, this mission is humanity’s attempt to locate the source of a mysterious signal emanating from the red planet.