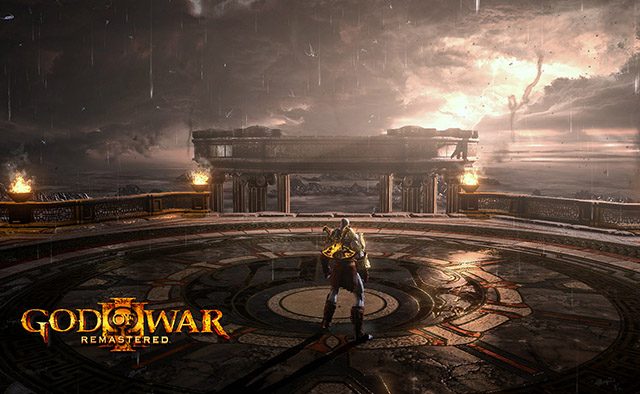 Happy Tenth Birthday, God of War! I can’t believe it has already been ten years (almost to this day) since Santa Monica Studio released Kratos out into the wild.

Creating an original game is really hard; it takes a combination of creativity, tenacity, guts, skill, and let’s be honest here, no small amount of total lunacy to imagine and see to the finish an entirely new world. So making an original game that is successful, well that is just lightning in a bottle, my friends. I believe that David Jaffe did just that when he created and directed the first God of War game.

Official God of War merchandise is now available on the PlayStation Gear Store at gear.playstation.com. The collection includes several t-shirts to choose from and a limited edition Kratos statue! The Kratos on Throne Statue depicts the final scene in the original God of War.

The statue is being produced as a limited edition of 1,250 and stands at an incredible 29 inches tall, showing Kratos sitting upon his throne as the new God of War. Reserve yours with a deposit today!

I joined the Studio later in the development of the first game and had the pleasure of being part of making Kratos who he is today. It all began with Dave’s vision of a brutal mythological world that was equal parts amazing and insane. Then slowly it coalesced with our desire to make the best “pick-up-and-play” action adventure game, seamlessly taking the player to the far reaches of their imagination.

All of this was rolled into the capable hands of one of the most talented development teams I have had the pleasure of working with, the Santa Monica Studio. Together we fought our way to the finish, battling side-by-side (and sometimes even against each other) to reach the finish line and release a game that we all were proud of. As luck would have it, many of you played that game and liked it enough to let us make many incredible entries into the series.

As a fan action adventure and story based games myself, I am forever thankful to Dave Jaffe for the amazing world he created, out of his freaking head. As a professional I owe much of my current career to the opportunity that he and Shannon Studstill (now head of Santa Monica Studio) gave me to go on and direct the second game

The story I wrote for God of War II set the stage for an epic finish to the trilogy Dave and I had always imagined, an all out war between the Gods, Titans, and our favorite angst-ridden Spartan warrior. Going into the third game I set to work on a script and game layout that would push the PS3 to its absolute limit.

While I did not continue on to direct the game, Stig Assmussen, the badass Art Director on the series, took the helm as Director and continued crafting the game and story to its eventual meteoric heights with creative gravitas and skill, and along with his amazing team created one of the craziest, most bombastic and most visually resplendent entries in the series. Seriously, every time I play through that game I see the unique brand of brilliance the Santa Monica team pours into every game they do.

Imagine if a game like that came out on PS4, right?

Well, thanks to the fine folks at SCEA (or Santa Monica Studio) we do not have to imagine anymore because God of War III Remastered is here!

Well, not here yet, but here in the sense that we are announcing it, here. It actually comes out on July 14th.

This action packed thrill ride of a game will take series newcomers and regulars alike on a retina-popping thrill ride filled to the absolute brim with 1080p gameplay, silky smooth combat, earth-shaking weapons, bosses you simply have to face to believe, and an all-new new photo mode so you can share those most tender of God of War moments, like stabbing a Minotaur in the frickin face, with your friends and loved ones.

I highly recommend everyone grab a copy and play because whether you are new to the series or Spartan veterans, God of War III Remastered is one damn fine game.

On this glorious day of celebration we are also taking some of the world’s best speed runners and bringing them together under one roof to watch them break, exploit, and skip all the long hours and hard work the development team put into these games, all in hopes of achieving the fastest completion time! Huzzah!

Seriously, they can finish the game in less time than it took for us to agree on a dinner order, its nuts. You should just watch it.