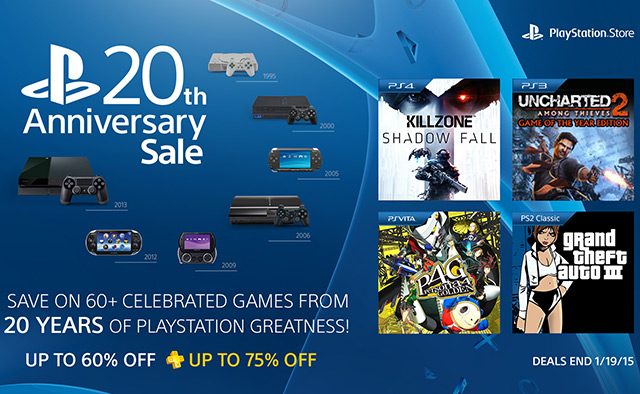 Happy New Year everyone! As you probably already know, it has been 20 years since the original PlayStation launched. So to celebrate the start of 2015 and 20 years of PlayStation, we’re discounting more than 60 celebrated games from PS4, PS3, PS Vita, PSP, PS2 Classics and PS1 Classics. Following today’s PS Store publish, you’ll be able to pick up a ton of titles at up to 60 percent off, with PS Plus members receiving up to 75 percent off.

Today through Monday, January 19, you can grab some of the biggest games from PlayStation’s deep catalog from the past 20 years, including Uncharted 2: GOTY Edition, Persona 4 Golden, Grand Theft Auto III, Killzone Shadow Fall, and more all at a discounted price. Check out the entire title lineup below, or head right to the Store.

The PlayStation Anniversary Sale runs through Monday, January 19, so head over to PlayStation Store to pick up some awesome games and take a trip down memory lane. What games are you going to snag this week?