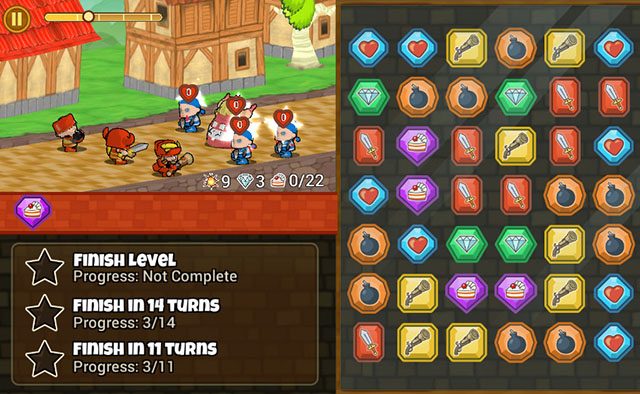 With over 55 levels across five unique lands inspired by the universe of Fat Princess, you’ll charge into battle with four different character classes and attempt to smash through the Blue army (because the Red army was always better).

While the gameplay is simple and fast to pick-up, you’ll need to strategically upgrade your characters – the knights attack single enemies for high damage, a ranger whose gun can blast enemies in the front row, the demolition specialist with bombs to stun all enemies, and a quirky wizard with a staff to rival Gandalf’s to heal your troops.

While the layers of gameplay strategy go far deeper, if you’re wondering where the centerpiece is, fear not! Feed cake to the princess by matching special tiles to unleash her devastating slam attack, trigger massive combos, and of course, save the kingdom.

Fat Princess: Piece of Cake is a free-to-play game set in an incredible universe and can be played without making in-app purchases, however some in-game items such as power-ups and character upgrades can be acquired through in-app purchases. It is near and dear to our heart and a step toward extending the Fat Princess universe to create a brand new experience for everyone.

With our recent announcement of Fat Princess Adventures, a new action packed four-player co-op experience, now is a great time for PlayStation fans old and new to get to know our beloved Fat Princess. So, enjoy a slice of Fat Princess: Piece of Cake, it’s on us. Follow us on Twitter at @SonySantaMonica