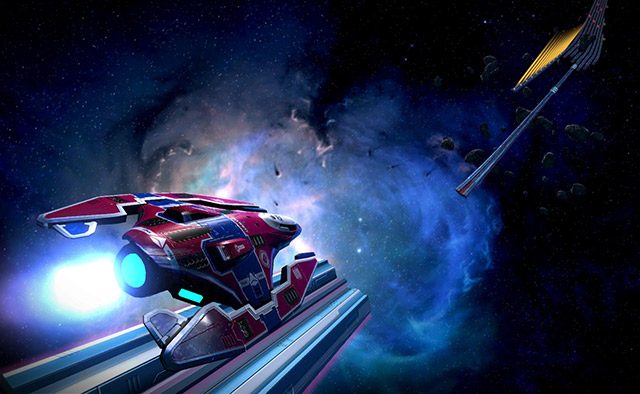 Oh hi! Happy Holidays, PlayStation friends. I hope you’re curled up beneath a blanket, sipping hot chocolate, and dreamily lazily as snowflakes brush your window. If you live in a warm climate, then I hope you… are keeping cool, I suppose? As we approach the end of the year, we only have a few more games coming to PlayStation — and they’re fast.

Switch Galaxy Ultra brings interstellar, super-fast racing to PS4 and PS Vita. Scream down tracks through space, and avoid obstacles in a nail-biting race to the finish.

Meanwhile, the critically-acclaimed Resogun makes the leap to PS3 and PS Vita this week. If you were looking for other ways to blast away baddies and save the last humans, look no further.

For a full list of new games coming to PlayStation, read on. And have a safe, happy holiday (and enjoy the Drop)!

Broken Sword 5 The Serpent’s Curse: Episode 2
PS Vita — Digital
Paris in the spring. Shots ring out from a gallery. A deadly conspiracy, and the conclusion to a classic Broken Sword adventure. Playing as intrepid American George Stobbart and French journalist Nico Collard, you find yourself on the trail of a stolen painting — and a murderous conspiracy.
Fieldrunners 2
PS Vita — Digital
Strategic-Action-Puzzle-Defense has never been this fun and addicting! Defend your world from the invasion by building winding paths out of imaginative, new weapons. Over 20 new levels span the grassiest fields, driest deserts, sparkling cities, and even an infernal volcano lair. Are you ready to stop the Fieldrunners once and for all?
Resogun
PS3, PS Vita — Digital (Cross Buy)
Unleash a diverse array of devastating weapons including lasers, missiles, overdrive, and nova-bombs to blast hordes of enemies and rescue the last survivors from distant galactic colonies that are under ruthless attack from an evil alien invasion force.
Shake Spears!
PS3 — Digital
Shake Spears is a game of glory, honor, and fame! Become a valiant knight and enter tournaments to compete for the heart of a beautiful lady. Travel through four worlds of wonder, win battles in 20 cities, and beat challenging bosses in this epic game. It’s time to become a hero for the ages.
Switch Galaxy Ultra
PS4, PS Vita — Digital (Cross Buy)
Welcome to the fastest gaming experience on PlayStation that’s loaded with content and features that will have you blazing across the galaxy at breakneck speeds. Weave your way past obstacles and enemies as you travel across the galaxy. Earn credits to spend on new ships and upgrades, hit speed-ups, and collect power-ups to get record times and take part in 2 exciting online multiplayer modes.
Trine Enchanted Edition
PS4 — Digital
Trine Enchanted Edition is the origin story for the three unlikely heroes of Trine — Amadeus the Wizard, Pontius the Knight, and Zoya the Thief. Spellbound by the magical object Trine, the heroes must join forces to overcome obstacles and puzzles in a fully interactive, physics-based world, battle the undead and their minions, and restore balance to the kingdom!