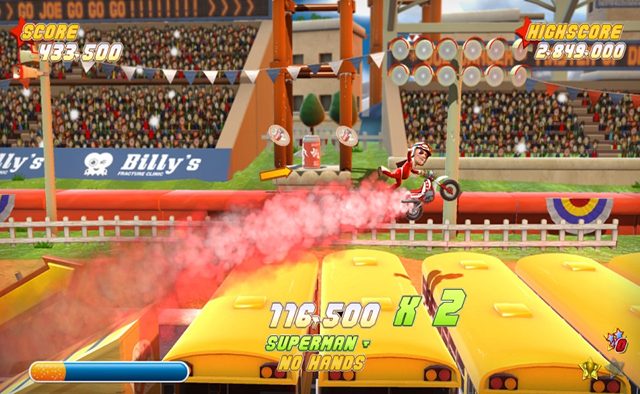 Hello, PlayStation.Blog! Let’s get right to it! We’re excited to announce that our game Joe Danger will be launching for PS Vita on September 2nd via PlayStation Store!

And that’s not all! PlayStation Plus members will get it for FREE as part of their September batch of games. Actually, you might already know this, because Sony’s official PlayStation Plus September announcement has made that pretty clear.

We know it’s been a bit of a wait, but we wanted to make sure it is perfect, and we’re incredibly proud of what we’ve been able to achieve. It’s everything you’d expect from Joe Danger in your hands.

It runs at a super smooth target of 60 frames per second, it’s pin-sharp, and super colorful.

It features every level in the PS3 original, plus the never-before-released on PlayStation Laboratory levels, making 84 levels in total. That’s a lot of game. Our UK indie friends Four Door Lemon have really helped us make it the perfect version.

What else… There are 25 characters to play as, a full set of Trophies to win, and the Vita version features a slightly tweaked control system so it plays really nicely. For the first time you can create your own levels with Vita touch controls. The game automatically downloads player ghosts for you to race against, which is another feature that has never been on PlayStation before, and there are online leaderboards for you to compete on, against your friends, and the world.

But what about the sequel, Joe Danger 2: The Movie!? Well, it’s still on the way! We’ll have news on that soon-ish.