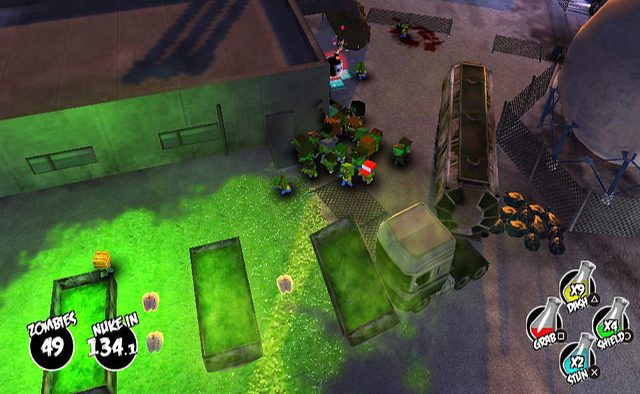 Wow. We’re featured on the PlayStation.Blog! I’m Andreas Firnigl, Director at Nosebleed Interactive. We’re a small development studio based in Newcastle upon Tyne in the North East of England, and the reason we’re surprised we’re on here is that we’ve come rather a long way in the last couple of years.

We’d like to introduce you all to “The Hungry Horde.” Like all good ideas, it’s a pretty simple concept. You start the game off controlling a couple of wayward zombies. Every time you bite a human they join your ever-increasing horde, until you’re controlling whole streets full of the undead. Unfortunately, rampaging through the streets eating brains is always going to grab someone’s attention, and sensing the danger to the population the government has decided to do the only sensible thing they can: quarantine the area and nuke you. So it’s a race against the clock to gather a big enough horde to smash down any human defenses and take on armed guards, tanks and any other opposition that gets between you and those tasty brains.

That’s the core of the game, but of course there’s so much more to it than that. At Nosebleed we’re all total gamers. Arcade, puzzle, strategy, casual and hardcore; as long as they’re polished and fun we play them all. The Hungry Horde is packed with extra features and content to discover and unlock, like the zombie creator or the boombox mode, but the thing we’re really pleased with is the minigames.

We use the term minigames very loosely. They’re not really minigames at all. Each one feels like a standalone game in its own right. We love games in games, so we’ve taken this to the next level with The Hungry Horde, where you play as a zombie, playing an arcade game where he’s playing a human, shooting zombies. How terribly meta! Then of course there’s “Conga Zombies,” which is about… well… conga dancing zombies. You can probably tell we don’t take ourselves too seriously. There will be loads more in the finished game and we’re really looking forward to revealing them and some of the other cool features in the coming months.

From all of us at Nosebleed Interactive, thank you for reading! We hope you’ve enjoyed this small taste of what we’ve been working on, and we can’t wait for you all to start playing the game later this year.