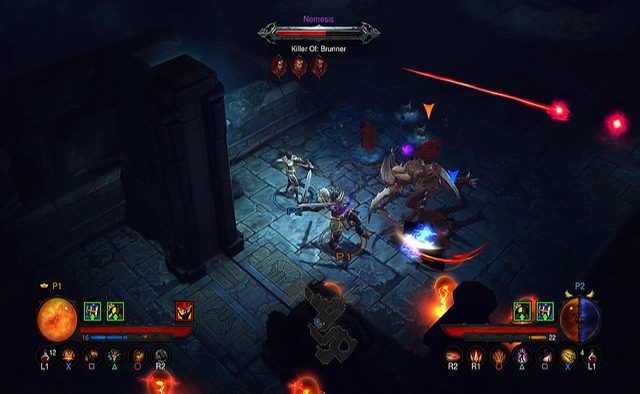 Greetings, nephalem! John Hight here to bring you an update as my team and I prepare to unleash a whole lot of evil on consoles everywhere. I’m pleased to say that on August 19, just two short weeks from now, you’ll be able to lay waste to Malthael and bring peace to the streets of Westmarch from the comfort of your La-Z-Boy with the release of Diablo III: Reaper of Souls – Ultimate Evil Edition.

The Ultimate Evil Edition is filled with all the features, fast-paced action, and legendary loot included in the Reaper of Souls expansion set, as well as all of the content of the original Diablo III. With a new chapter to play through and the new Crusader class to master, plus the freedom to explore endlessly with Adventure Mode, your path to new heights of power will be literally in your DualShock-wielding hands.

I want to remind everyone to get your preorders in if you haven’t already. Doing so will land you a devilishly sweet pair of Infernal Pauldrons, which provide some powerful bonuses for your characters, and they look pretty cool too—a plus considering you can also use them for transmogs (a new feature available in UEE). For those who pre-purchase the game digitally on the PlayStation Store, you’ll also pick up a set of helm and weapon transmog recipes, a Spectral Hound minion, and three additional character slots.

The Ultimate Evil Edition also includes some console-exclusive features—like Apprentice Mode, which boosts lower level players when they’re playing with higher level players; the Nemesis system, which sends monsters that have slain your character on to wreak havoc in your friends’ games; and more—all of which make playing with your friends even more challenging and rewarding. We’ve also teamed up with Sony to bring PS3 and PS4 players some exclusive content: a Nephalem Rift inspired by The Last of Us, and a larger-than-life transmog armor set based on Shadow of the Colossus. If you haven’t seen these yet, you should check them out at our blog.

For players who’ve been holding off on bringing justice to Diablo on console, now is the perfect time to join the fray, as the Ultimate Evil Edition is a maxed-out version of the game, with Diablo III and all of the latest updates for that, plus all of the new content that we launched with the Reaper of Souls expansion. And if you’ve already played Diablo III on console, I have good news for you as well: you’ll be able to transfer your characters over into this new release and continue your adventures—even across console generations.

One more cool piece of news for PS4 players: the next-gen console architecture makes it much easier for us to offer ongoing patch support for the PS4 version of the Ultimate Evil Edition. This means that as we continue to patch the game on PC, we’ll now be able to roll out related patch content, as appropriate, on PS4 as well. It’ll take some additional time beyond the PC patch rollout, but we’ll get them to you as quickly as possible.

After slaving away in the deepest depths of the Burning (development) Hells, I’m excited that the game is almost here and ready for you guys to play. Slay well, nephalem, and we’ll see you in Hell!