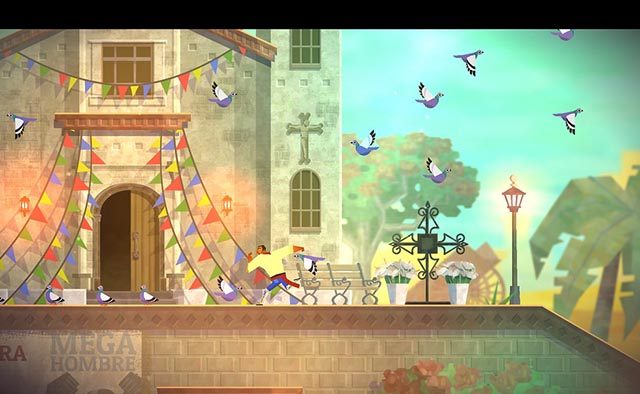 For those not in the know, we released the original Guacamelee last April for PS3 and PS Vita. As it turns out, a lot of you enjoyed playing as luchadors Juan and Tostada, punching skeletons and platforming through a magical, Mexican-inspired world to save El Presidente’s Daughter from Carlos Calaca and his gang of minions.

Guacamelee! Super Turbo Championship Edition has all the great action from the original game, including both the costume and Infierno DLC, and we’ve added a bunch of new content to enhance your Guac experience.

We’ve also added a new boss, El Trio, a.k.a. “Terrible Trio.” They are a three-headed skeleton in charge of assembling Carlos Calaca’s army of skeletons from a skeleton factory inside a volcano. El Trio appears in a few areas in the game to throw new enemy prototypes in your path and a few new puns as well.

El Trio were a musical quartet back in the land of the Living, but the lead singer, named Pedro, went missing and never appeared in the land of the Dead. Longing to be reunited with their missing band member, El Trio and Carlos Calaca made a deal: Calaca would help them find Pedro in exchange for a skeleton army. Will they ever produce enough skeletons to fulfill their end of the bargain?

Talk to us about #GuacSTCE in the comments or here on Twitter. We hope you like it!