OlliOlli Rolling to PS4 and PS3 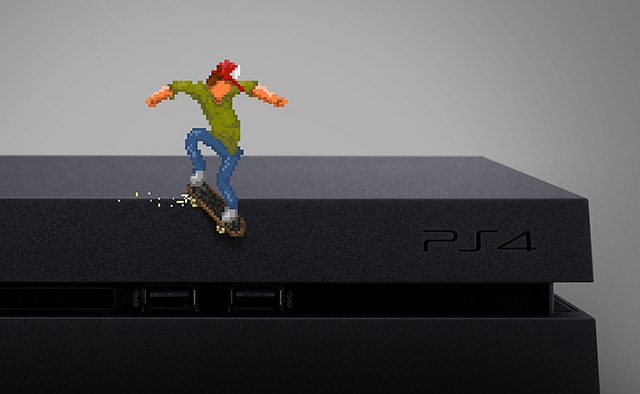 Well, it’s been quite a rollercoaster for us at Roll7 over the last few months!

Our submission process last year was pretty hardcore, with many a pizza-stained late night at our Deptford HQ, London. The team was pretty much broken by the time OlliOlli came out. We had broken down everything that was ‘wrong’ about the game to such an extent that we had managed to successfully convince ourselves that the game would most likely be a flop, a mediocre launch at best…

What we were met with on the 21st and 22nd of January this year genuinely knocked us sideways. There was media frenzy for days, amazing review scores and most of all gamers, real people (not testers or our friends) were playing the game and enjoying it.

There were numerous late-night emotional drinking sessions in central London as we essentially came to the realisation that we were a ‘proper’ studio with a hit game – it has still not properly sunk in for most of us!

The BIG moment was almost fate-like. We were out doing a belated wrap party on the project at our local in New Cross and at about 10pm (after many rounds of tequila) we found out via Twitter that we had won the GameSpot Game of the Month for January. Let’s just say that there were a few teary eyes by midnight — it was a career highlight, and an evening none of us will ever forget.

We met with Shahid and Spencer who run the strategic content team at SCEE, and they recommended that we get the game onto PS4 and PS3 – so that’s what we are doing! We have partnered with BlitWorks, who are based in Barcelona, Spain. We already have a first playable version up and running on PS4 and a big screen — it’s like our little OlliOlli grew up and got some balls! Really feels amazing on DualShock, too.

Such exciting news deserves a big manly jump on a hill…

OlliOlli will remain a PS Vita exclusive until summer 2014, and Roll7 is very close to fixing the crash bug that some players are experiencing. When that patch is released, we’ll bundle in a nice little update that should put a smile on people’s faces.

If you are UK-based, and you fancy getting your hands on OlliOlli and having a chat with us, you can find us at Rezzed, Birmingham (March 28th – 30th).

Check out our OlliOlli Development Video to get more of an insight into Roll7 studio life, and follow us on Twitter for all the latest. Keep it Indie, and keep it Sony in 2014!