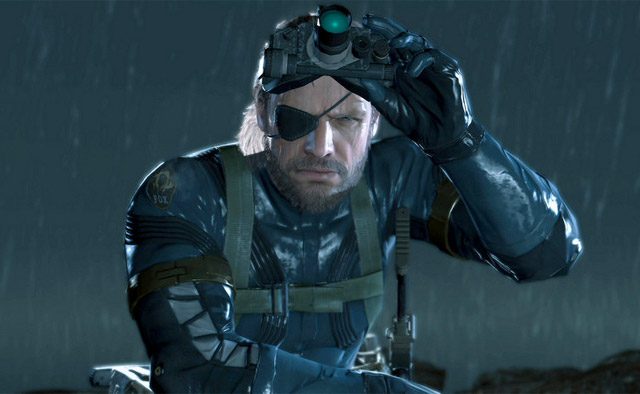 Snake moves across the dirt and rock with immaculate care, crawling in silence as rain soaks his suit. He blends into the darkness, and the passing chopper screeches overhead in ignorance of his trespassing. As the camera pans to reveal his face, each wrinkle on his brow betrays his great military experience and troubled past. But this is just another mission for the iconic hero, who returns to PlayStation today in Metal Gear Solid V: Ground Zeroes for PS3 and PS4.

Following the events of Metal Gear Solid: Peace Walker, Ground Zeroes finds Big Boss infiltrating a military compound in Cuba, with a mission to extract two high-value targets before they’re executed… or worse. Ground Zeroes establishes the initial story arc that will continue in Metal Gear Solid V: The Phantom Pain. Think of Ground Zeroes as an appetizer to the main course.

The talented team at Kojima Productions have worked marvels on PS4, lending a breath-taking sense of realism to Ground Zeroes and the characters therein. The character models and animation have reached new heights for the series, while the large military base brims with detail, both large and small. Rain lashes down from the night sky in gouts, mechanized gates groan into motion as claxons blare, and the distant whir of an approaching jeep motor can send even an experienced player into a panic.

Special attention has been spent on Ground Zeroes’ controls, enabling players to move, crawl, dive, roll, and fight in fluid succession. In classic Metal Gear tradition, much of the fun comes from learning the behaviors of the soldiers on the base, and finding the best ways to deceive or dispatch them.

Snake has several tools for doing just that, including his trusty tranquilizer pistol, as well as a host of weapons on the base he can procure, from shotguns to rifles. Metal Gear fans will relish the return of other series standards, like engrossing radio chatter and a story steeped in intrigue. Although Ground Zeroes is but a taste of the full Metal Gear Solid V experience, it provides rich insight into Kojima’s future project.