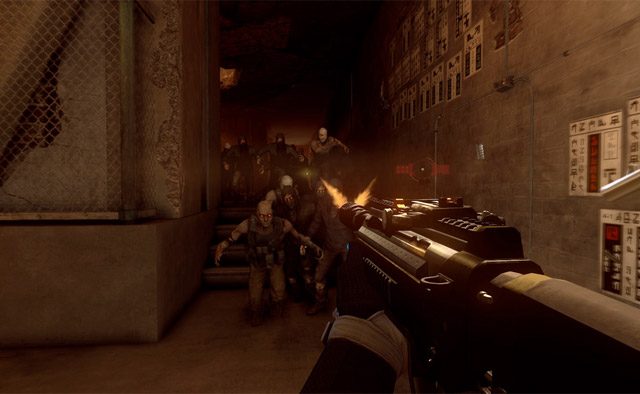 Zombie has been getting a lot of questions about when the next patch hits for the Blacklight: Retribution PS4 beta, and what will be in it. We’re happy to announce that the first content patch for Blacklight: Retribution on PS4 will go live today, Thursday February 27th. This patch includes too many things to list here, so we’ll stick to the really, really good stuff – the first of which is the introduction of our cooperative game mode: Onslaught!

Onslaught pits four Blacklight Agents against an endless horde of infected. Players will have to strategize and cooperate when building their loadouts in order to complete the challenges of Onslaught as a team.

Each wave and enemy type will force you to adapt as the threat changes. If you bank too heavily on fortifying one area, you might find yourself overrun. But if you remain too light and mobile, you may not have the heavy firepower you need to punch through what comes next. Rely on your wits and gear to see you through it. Those who find a way to succeed will be rewarded for their efforts!

Decay and Metro are both included for you to play on!

Metro is set in an abandoned subway station long since taken over by squatters. Players will face fierce firefights in the narrow corridors. Only teams who find a way to exploit open avenues of attack can succeed here. Watch your flanks, and make sure you know which way the threat is coming.

Decay is a slum fortress set deep in the worst and most rundown area of the city. Threats will come from above and below in this rat warren. Teams will need to stay sharp as they move together and watch the roof tops and ruined buildings. Keep your eyes peeled for ambushes in the shadows, and don’t get pinned down.

We’ve also introduced private servers to Blacklight: Retribution PS4. With these, you can set up matches for just you and your friend so you can play the way you want, with who you want. Sometimes you just need to get away from the mayhem of public matches and enjoy a more gentrified experience with your friends.

Zombie’s number one priority during this patch has been to make it easy for you to find a fun game of Blacklight to play. This includes matching itself, as well as host migration and host selection. We’ve also added a lot of tools that will let us further tune this moving forward.

Our beta players have been exceptionally helpful. You’ve let us know about issues you’ve run into, and it’s helped the team target areas for improvement. With this patch, you’ll notice improved frame rates, faster loads, and a smoother experience overall. Thank you all for playing the Blacklight: Retribution beta on PS4!