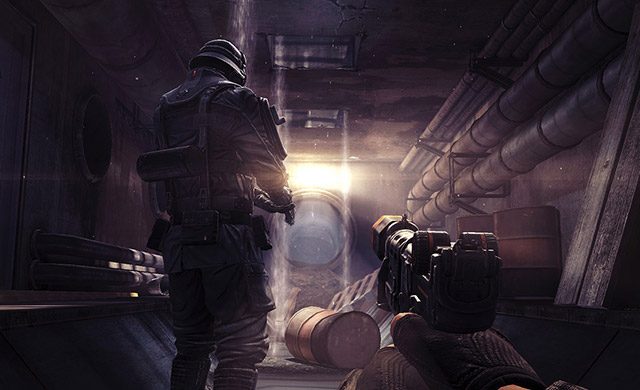 Share this on Facebook (opens in a new window) Share this on Twitter (opens in a new window)
Justin Massongill Content Communications Manager, Sony Interactive Entertainment
4 Author Replies
Wolfenstein: The New Order pits players against seemingly insurmountable odds in a skewed 1960’s where the Nazis conquered the world. An FPS that’s old-school in all the best ways, it eschews modern niceties — no recharging shields here — in favor of merciless, finely honed shooting.

Our recent hands-on experiences with the PS4 version pointed to an invigoratingly confident single-player shooter of a distinctly different breed. Case in point: Original FPS hero B.J. Blazkowicz goes to battle with 100 health, which you’ll top off by collecting medkits and gorging on food scattered throughout levels. This traditional damage model combines with modern-day visuals, a surprisingly satisfying story, and strong character progression to create a unique and refreshing take on the genre. Old meets new, but in the best of ways.

Old-school in all the best ways

Clicking DualShock 4’s touchpad pulls up BJ’s journal. The Perks section drew particular attention. Rather than accruing experience points, you’ll unlock perks by completing specific challenges. Specialize in a particular weapon, and you’ll gain related skills in the skill tree’s Stealth, Tactical, Assault and Demolition sections. And depending on your playstyle, you’ll fill out some branches more quickly than others.

In terms of storytelling, The New Order seeks to similarly recalibrate the idea of the FPS by weaving a tale with unexpected turns, meaningful relationships, and diabolical antagonists. You’ll face tough choices, too. No spoilers, but at one point I put the controller down in hopes that the game would make a decision for me (it didn’t).

This reboot is a gutsy move

The arsenal is predictably expansive. Even the pistol BJ brandishes is massive and imposing, not to mention the myriad rifles, shotguns, machine guns and turrets you’ll employ. What’s more, BJ can dual-wield nearly any weapon in the game, which comes at the cost of some accuracy but is often worth the price of admission: hosing down a crowd of unsuspecting Nazis with akimbo assault rifles or full-auto machine guns is an experience you won’t soon forget. Another touch I appreciated was the ability to unmount and carry turrets, which you can warm up with L2 before unleashing a torrent of hot death.

MachineGames‘ Wolfenstein reboot takes place in an alternate reality, and feels like it was devloped in one too. It’s a gutsy move that asks, “what if shooters evolved differently?” Find out for yourself when the game ships on PS4 and PS3 May 20th.