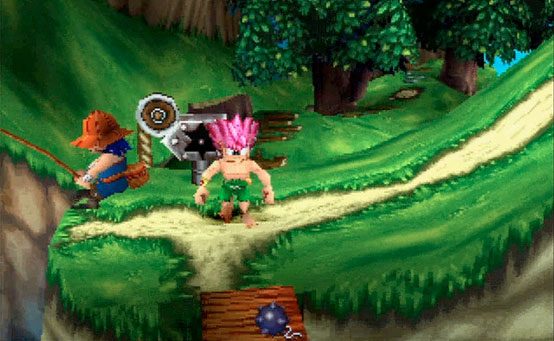 We’ve gotten a lot of great response from everyone and it’s made us happy to see these games being enjoyed again.

However, the Retro Rush has all been leading to this point, the game that we’ve gotten the most requests for out of any other game we’ve released: Tomba! 2. Tomba! 2 is a title we’ve wanted to release for the longest time but we’ve had to overcome some technical hurdles first.

On February 18th, you can download the Japanese import version of Tomba! 2 for your PS3, PS Vita and PSP. Since the title is in Japanese, we’ll be providing a complete walkthrough on our website for players.

Tomba!, for those who are just learning of our wild jungle boy, was created by Tokuro Fujiwara, who many gamers will recognize having a hand in other classic games like Ghosts ‘n Goblins and MegaMan. Tomba! 2 picks up where the first title left off and puts our hero on a magical platforming journey full of memorable moments.

Tomba! 2 continues the adventure of the wild, pink haired jungle boy but this time, he is out to save a friend that mysteriously disappeared. That will lead Tomba! on a quest through some unique locations that will highlight the blend of 2D/3D platforming gameplay that makes the series so unique.

The critically acclaimed sequel brings with a slew of improvements along the way like suits that give Tomba! special powers and heavier use of 3D models to bring the game world to life. The Adventure Point system makes its return too that keeps the gameplay fresh all the way to the last boss.

The Retro Rush will start to slow down now that Tomba! 2 is out but that won’t stop our commitment to classic, retro games. Video games have such a rich history and we’ve made it our mission to continue to digitally release titles like Double Dragon, Lucifer Ring, The Firemen 2, Wolf Fang and Tomba! 2.

Have suggestions of games you want to see next? Find us on Twitter at @MonkeyPawGames and let us know!