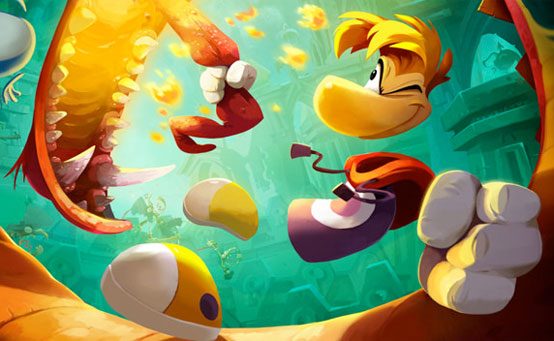 Next week sees the release of Ubisoft’s phenomenal platformer Rayman Legends on PS4. The limbless mascot’s latest adventure won huge acclaim when it launched on PS3 and PS Vita last year, and we can’t wait to see how its gorgeous visuals translate on the new hardware.

With that in mind, we’ve been harvesting a few of your questions via Twitter and our official forums, and put them to Senior Game Designer, Emile Morel. Read on to find out more about what you can expect from the PS4 release.

Can we use the touchscreen of the PS Vita to get the most out of the game? (Fragbeat, Netherlands)
Emile: In the PlayStation 4 version of Rayman Legends, you can use your PS Vita in Remote Play mode, which means that you can play the entire game on your PS Vita, without the need to use the TV. This mode is useful when you’re in the middle of a game and someone wants to use the TV, so you don’t have to stop, and you can continue playing for as long as you want!
As you will see, we have adapted the game controls to PS Vita so the experience is as enjoyable on this console as it is with the PS4 joystick in your hands!

However, you cannot control Murfy in touch mode on the PS Vita, because even in Remote Play mode you will continue to play the same version of the game when you use the PS4 joystick. The Murfy levels on PS4 have been designed to be played with a classic character, such as Rayman or Globox, for example. So, in using your PS Vita in Remote Play mode, you will find the originality and specificity of this PS4 version.

There are many musical levels on the PS3 version. What music would you like to add in a future game or via DLC? (CyberDie21, Netherlands)
Emile: When we were developing the game, we had a fairly large list of songs that we wanted to add to the game to create new musical levels. In the end, we kept only the best songs to integrate into the game.

If we had to make a DLC with musical levels, I could not tell you specific titles of new songs that would integrate the game because we would make a whole new selection, but I can tell you what is important in a song to make a good musical level in Rayman.

The song must have a fast enough rhythm (to match Rayman’s speed when he runs), it must have several variations from beginning to end (in order to create a good level design that surprises the player), and it must be very popular (to be easily recognised by players despite the small touch it adds to Rayman).

Why does Rayman not have a girlfriend? (Chrisdenimes, France)
Emile: I tend to believe that we do not know all of Rayman’s private life. ☺ But what is certain is that he was so busy saving the Glade of Dreams in recent years, that he did not have enough time to find a girlfriend! That’s the price you pay for being a hero!

Regarding the online challenges, will the PS3 and PS4 boards be linked or will we only see PS4 scores? (Fourcherman, France)
Emile: Online challenges on these two versions are different, and rankings on these two versions will also be separated. This will allow the best players to shine on those consoles separately and to earn the best cups. Thus, players who discover the game on PS4 will have the chance to go higher in the rankings without having to face experienced players of the PS3 version who have been training with the online challenges since last August.

Why is it that the Land of the Glades, so calm and peaceful in Rayman 3, has become so sinister and dangerous in Rayman Legends? (Lechevalierdej, France)
Emile: Everything went wrong at the beginning of Rayman Origins. Rayman and his friends were snoring so loud they pushed the inhabitants of the Land of the Glades, who just wanted to live in peace, to the limit! Crazy with anger, the inhabitants of the Land of the Glades suddenly became very aggressive and terrifying characters, transforming the landscape of the place to their own image! Since then, the Land kept this evil aspect, but perhaps it will go back to being a calm place one day. You see, in the end it’s just a neighborhood story that went wrong!

What are the differences between the PS4 version and the PS3 and PS Vita versions? (erprimo10, Spain)
Emile: There are many differences and new features in this PS4 version. In this version, thanks to the power of the PS4, the textures of the game are more compressed, so you can see that the game’s graphics are clearer and more detailed than before. You will also see that there is no loading time when you enter or exit a level, which makes the navigation even faster and more enjoyable.

We have also integrated a new Camera Mode on PS4. By pressing the touchpad of the PS4 joystick, you pause the game and enter this mode, and by moving your fingers on the touchpad, you zoom in and out on the image and drag the image frame; and finally, by pressing the Share button, you can take a photo and share it with everyone. This Camera Mode is a great way to observe in detail all the characters and settings of the game, and a great way of expression to create wacky images with the elements found in the game.

On PS4, you can also use the touchpad to scrape the famous Lucky Tickets, then you will really feel like you’re scraping lottery tickets (with the sound of scraping straight from the PS4 joystick)!

Finally, in this PS4 version, you’ll also find new playable heroes: Assassin Ray (a character inspired by Edward Kenway, the hero of Assassin’s Creed IV: Black Flag), Funky Ray (a delusional character that you can unlock by using Uplay points), and Champion Ray (a character who will be offered to the best players of the community and those who live in this community; this character correspond to the new VIP status, visible in the rankings of online challenges).

Rayman is a real video game icon – how much pressure to deliver did you feel during development? (Midgar_01, Spain)
Emile: Yes, the pressure is always big when you do a famous character like Rayman because you don’t want to disappoint the series fans! The pressure on Rayman Legends was even stronger because it was succeeding Rayman Origins, which is great title, so we had to prove we could still reinvent the game and bring new ideas!

That being said, once we were completely immersed in the game’s development, we released a little of that pressure because the force of Rayman is that his world is very open and free, bringing an incredible number of new features in each episode, and that gives the impression of having worked on a brand new game, and not a title that is part of a saga that has been around for almost 20 years! Rayman’s DNA is also there in this continuous changes that always bring a fresh element!

Where did the idea of Snoop Dogg promoting the next gen version of Rayman come from and will he be a playable skin in the game? (hayzink, UK)
Emile: It was the marketing teams who had the idea of using Snoop Dogg to promote Rayman Legends. The idea immediately appealed to its comic side, which goes very well with Rayman’s world. Snoop Dogg is not necessarily the first artist that comes to mind when we think of Rayman, so the idea of bringing together these two characters, these two legends, is something weird and funny! And, in addition, it proves that Rayman evolved with time, and it currently is a part of pop culture, just like Snoop Dogg!

And no, Snoop Dogg will not be playable in the game, he appeared as a character in the game just as a little joke in the trailer.

Is there any chance of having DLC with extra musical levels and will these type of levels be featured in future Rayman games? (dogwalker4000, UK)
Emile: So far, we have not announced DLCs for Rayman Legends, but if we ever do, we will make it clear that we would include new musical levels! We loved making these levels and, obviously, people also loved playing them! People always ask us for more musical levels, so there is a good chance they will be present in future Rayman games. I think that people now associate these levels with the brand and the character! It must be said that music has always been an essential part of Rayman’s world, so it is quite normal that these levels have fully found their place in this series!

Can we expect a Rayman game that will not be in 2D in the future? I’m a big fan of Rayman Revolutions on PS2. Although 2D games have their own charm, I’d love to play something like Rayman Revolutions again. (Hgtred, Germany)
Emile: Rayman Revolution (other title of Rayman 2: The Great Escape) was a great game, and it is very possible that Rayman will be in 3D again one day. After all, the series began in 2D, and then the games were made in 3D, and finally went back to 2D with recent titles – this is a story cycle and I think that all forms are possible in the future of the series!

What was the most difficult part of the development on PS4? What was the most exciting part?
Emile: Without a doubt, our engineers are the ones who have worked the most to optimise the game on PS4 and remove the loading time. It may seem pretty trivial when it’s said like that, but the element of not having a loading time when you enter or exit a level actually changes the gaming experience. I remember the first time we were able to test the game without the loading time: we spent time entering and exiting the tables, just for the pleasure of seeing the levels start immediately. It was almost two years of knowing the game with the loading time, so suddenly not having it really changed the experience.

The development of Camera Mode was particularly interesting as well, because it is a great tool for players to finally see all the details that our artists have placed in the character animations and decorations (including the backgrounds). When this mode was available, we played a lot trying to create the craziest images by stopping the game at the best moments. I cannot wait to see the crazy images that the community will create using this mode!