God of War Collection Coming to PS Vita May 6th 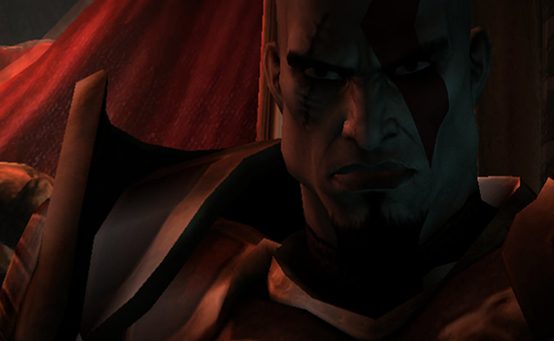 Hungry for more of another PlayStation franchise you know and love? Wish you could experience the thrill of thieving with your best pals on the go? Have you always questioned the concept of pants? You’re in luck — Sly Cooper Collection is coming to PS Vita on May 27th!

The Sly Collection for PS Vita sees the mischievous raccoon and his gang of eccentric friends pull off daring heists in this entertaining platformer adventure. Packed full with mini-games and thrilling missions from across the globe, The Sly Collection masterfully blends stealth, thievery, combat, strategy and exploration into one huge world.

Wait, what? God of War 1 and 2 are coming to Vita? Are you frakking kidding me? YEAAAAHH!!!

All of the work in my career is an important part of making me who I am but the first two ‘God of War’ games were truly the catalysts for a creative A-Bomb… and no small amount of F-Bomb’s too. ‘God of War’ 1 and 2 changed the course of my career forever and nothing could please me more than to see them getting released on the Vita. We did some amazing work with the controls, seamless integration of an epic story into a load-free experience, and now that can be taken with you ANYWHERE!!

While I did not have a direct involvement in the actual process of bringing the epic-ness to the Vita I still feel an amazing connection to the release of these games, and a huge amount of respect for the wizards who made it possible. I would not be writing this if it weren’t for those two blood-soaked PS2 discs. Well, that’s not true, I would be writing this but it would be with a well-worn crayon on the padded walls of a comfy cell in one of California fine institutions for the creatively insane, and the only person who would read it would be my doctor – strangely, played by that condescending psychiatrist from ‘Terminator 2’. (I would probably be insistent that robots are going to take over the world too – because they are.)

Where were we? Oh yeah, how the GOW collection on Vita is going to be awesome. I actually just finished an inflight session of Persona 4 Golden on my super sweet import Vita 2000 – I freaking love my new Vita. To be able to replay those two games on the go is awesome, a little Perseus fight at 33,000 feet? Yes please. Sure, Sony pays me to make games but they don’t make me say that. Actually, I imagine that most of the time they are standing by with black markers, like those stone faced twins in ‘Good Morning Vietnam’, (who are also in the aforementioned Terminator 2) waiting to redact any accidental slip…like me ‘allegedly’ accidentally announcing God of War on the PS3 way back when– oops.

If you haven’t played the games, never been a better time to check out portable version of the originals that started it all. How much would you pay for this on-the-go awesomeness? A million dollars, right? I would, but that is only because I truly have no concept of money, that’s why no one lets me handle it. I would own the original boulder prop from ‘Raiders of the Lost Ark’ right now if they did. It would be great but I would be broke. I am sure you can all handle your own money so grab the sweet Vita double pack when it releases with an MSRP of $29.99 on May 6th.

Here are some of the awesome Vita screens the marketing robots asked me to share with you…or was it the voices?

Sidebar… I recently had an incredibly magical moment with my new Vita and PS4. Yes, I know, I work with this stuff all day so how in the world can I have a magic moment with it, right? My wife and her sister were watching a movie in the living room where the PS4 was located, something I was none too interested in watching, so I hung out in the other room intent on playing some Assassin’s Creed IV via Remote Play. Just as I settled into a comfy chair and tapped the PS4 icon on the Vita I realized I forgot to turn on the ps4 – DOH! Being the lazy bastard I am I sat internally debating if I wanted to get up and risk burning my eyes from seeing even a small amount of the Hunger Games in order to turn on the PS4 or just play some OlliOlli instead. Well, in my moments of hesitation the Remote Play selection came up, so I just tapped the button out of pure sense memory and what did I see? The readout telling me it was turning the PS4 on. WHAT??? After a few seconds the PS4 menu popped up on my Vita, I started AC IV and proceeded to plunder booty, lag free – like a Swede.

Yeah, it’s a small thing, I know…but, to me, it was a magical moment. Perhaps this is something everyone knows, but I felt that childlike sense of discovery and wonder. Even if it was just for a fleeting moment, it was great.