Black Friday Deals for PS3, PS Vita, and PS Plus 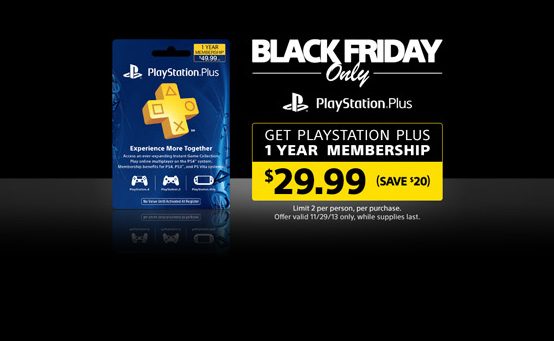 November has been a huge month for PlayStation, and there’s never been a better time to join PlayStation Nation. We’ve got some incredible Black Friday deals for PS3, PS Vita, PS Plus and more, to keep November going strong.

We’re putting two of the most popular PS3 titles of 2013 together to bring you the PS3 Black Friday Bundle for only $199 (MSRP). This bundle includes a 250GB PS3, Batman Arkham Origins, and The Last of Us — one of the highest-rated games of the year. That’s $165 worth of savings.

So Black Friday is the perfect time to pick up a PS3, and we’re continuing to bring you great content on the platform. Gran Turismo 6, the latest entry in one of the most popular franchises in PlayStation history, will launch exclusively on PS3 on December 6th. Not to mention blockbusters like Grand Theft Auto V, Call of Duty: Ghosts, Assassin’s Creed IV Black Flag, Battlefield 4…

It’s also a great time to pick up a PS Vita, so you can play Tearaway — which launched today to stellar reviews — and recent hits like Killzone Mercenary, Injustice: Gods Among Us Ultimate Edition, and Spelunky.

PS Vita is the ultimate companion device for PS4 through key features like Remote Play, letting gamers play most PS4 titles on their PS Vita via Wi-Fi on their home network, freeing up the television for other uses. Check out the various deals below:

There will also be a special Black Friday deal for PlayStation Plus at select retailers nationwide. Pick up 1 year of PS Plus for only $29.99* — that’s 40% off the regular price of $49.99. With PS Plus, you’ll get new games every month with Instant Game Collection. You’ll also get access to online multiplayer on the PS4 system. Best of all, one membership will cover you across your PS4, PS3, and PS Vita… for just $29.99* on Black Friday only.

Available on the SEN Web Store

Black Friday is a huge day to pick up games at great prices. First-party games like The Last of Us and Beyond: Two Souls will be available for $39.99 each (additional days and savings at some retailers). Check your local retailers for additional deals on more than 20 first-party titles.

There will also be special pricing available for DualShock 3 wireless controllers at select retailers nationwide. Check your local retailers for pricing and availability.

These deals won’t be around for long, so mark your calendar for next Friday and get ready to rake in the savings. Have a happy holiday, PlayStation Nation!