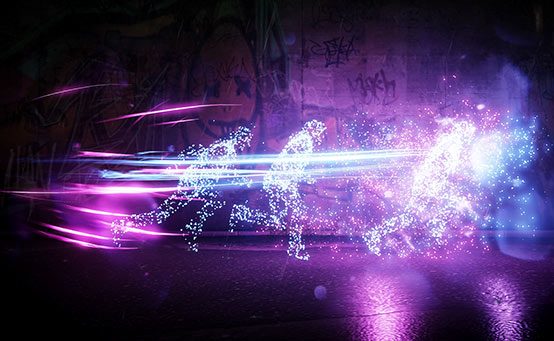 Things don’t go as planned for Delsin Rowe, the smug but likeable hero of inFAMOUS Second Son. Following the catastrophic events that shook the world in the first two games, Delsin’s super-powered status as a Conduit is laid bare after exposure to other superhumans. Delsin can absorb the powers of others, and then employ them for his own devices. He has serious potential, and that immense potential was on display during the PS4 launch event here in New York City this week.

This third-person, superhero action game already looks electric running on PS4, with fluid animations and sharp bursts of light around every rain-soaked corner. At the event, we join Delsin and his cop brother Reggie as they attempt to pass through a Department of Unified Protection (DUP) security checkpoint. Their dark, menacing uniforms stand in stark contrast with the bright yellows of warning signs that litter the scene.

But unfortunately for Delsin, things don’t go as planned.

Sure enough, Delsin’s spectacular abilities trigger an automated warning at the checkpoint, and the DUP descends upon him with rifles ready. This is where the first playable section of Second Son begins. I grabbed the DualShock 4 with an appropriate level of eagerness (see: extensive), and put Delsin through his paces.

Second Son feels just as it should in the inFAMOUS family, with an addictive fusion of melee combat and projectile play. Once again, Sucker Punch has approached traversal carefully and with a great attention to detail.

The first power on display is smoke, which gives Delsin some great ways to move around. Our hero can burst apart into gouts of red and black, whipping right through obstacles and towards targets. All it takes is a press of the Circle button, but the momentum this move generates is exhilarating and practical, providing Delsin with much needed control of the battle space.

Like past inFAMOUS games, Delsin can also leap up onto cars and launch off of them with more inky explosions, gaining additional height and tactical options. In fact, explosions (and, more specifically, their remnants) fuel Delsin’s smoke abilities — much like Cole’s beloved electricity. By standing near a ruined car or fire that’s belching smoke, Delsin can absorb it into himself for some extra super juice. A fine meal for any smoke-powered protagonist.

Delsin can move around all day, but he still has some very angry DUP soldiers to deal with. Using his chain and shots of smoke, Delsin chews through the opposition with style. Each tap of the Square button peppers targets with sizzling blasts that come in both light and heavy varieties. The heavy, “shotgun” blasts are capable of tearing down guard towers, along with any unfortunate soldiers staffing them at the time of demolition.

Delsin has a few more tricks up his sleeve, however. Our hero can drain the humming charge of neon signs and take on those powers for himself. Yes, “neon” can be a power, and it’s rad from top to bottom. Delsin’s blast becomes a bright streak of light, and his new, neon dash can send him flashing up the sides of walls in a glorious display of color. Sucker Punch is tightlipped on the other applications this power will provide, but the mind races at the possibilities.

The demo ends on Delsin face-to-face with a hulking soldier and his chaingun pal. But even the extra padding isn’t enough to save the soldier from Delsin’s tentatively named “karma bomb,” which sends our hero up into the air and back down again in a screen-wide attack.

inFAMOUS Second Son looks and plays like a dream, and makes our wait for Delsin’s story all the harder to bear. Expect increased smoke levels in Seattle come early next year, when Second Son drops on PS4.