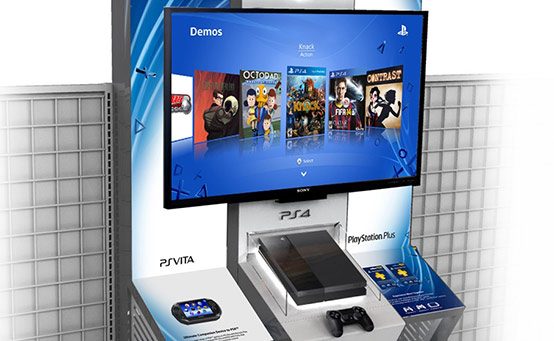 Hard to believe we’re less than a month away from PS4’s launch on November 15th. Exciting! If you just can’t wait to get your hands on a system, I’ve got good news. Starting today, we’re rolling out PS4 demo kiosks to stores nationwide. The initial wave of PS4 demo units will appear in select Sony Stores, with thousands more added to various retail locations, such as GameStop, Best Buy, Target, and Walmart — among others in the coming weeks.

To find the PS4 demo kiosk nearest you, click the link below. And remember, if you don’t see one nearby, just check back later to see if any have been added to stores in your hometown.

Find Out Where You Can Try PS4

Once you find a kiosk, you’ll be able to sample upcoming PS4 games like Knack, Octodad: Dadliest Catch, FIFA 14, Contrast, Super Motherload, and Pinball Arcade. Keep an eye out for the kiosk at a store near you, and have fun playing!