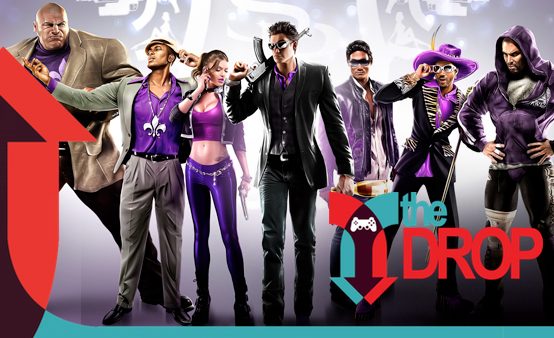 Saints Row IV arrives on PS3 and PSN this week. The head honcho of the Saints has been elected to the Presidency of the United States. But the Saints are just getting started. Now the larger-than-life insanity of the Saints series gets a new twist with a catastrophic alien invasion, and the aliens have transported the Saints to a bizarro-Steelport simulation. Wield gargantuan superpowers and fight to free humanity from alien granddaddy Zinyak’s mental grasp. Escape the simulation that’s trapped the Saints crew, or die trying.

As a Cross Buy and Cross Play title on PS3 and PS Vita, Divekick distills the essence of the fighting genre into a two-button, no-joystick, rage-inducing form that can be enjoyed by anyone. You have no traditional directional movement.

(Also on PSN) — In the next open-world installment of Saints Row, Deep Silver Volition continues the story of the Third Street Saints by elevating their status to the highest level – the leaders of the free world.

Saints Row IV lets players delve into an arsenal of alien weaponry and technology that will turn each Saint into an ultimate entity of destruction. Utilize out-of-this-world superpowers to fight all the way to the top. With intensified action and enhanced customization, players can use their newfound superpowers and leap over buildings, outrun the fastest sports cars, or send enemies flying with telekinesis in the greatest, most insane installment of Saints Row yet. Save the world, Saints Style.

Disney Infinity unlocks the freedom to play with some of your favorite Disney and Disney/Pixar worlds like never before! You can experience adventures in the worlds of Pirates of the Caribbean, The Incredibles and Monsters University — take on the role of Sulley, the naturally gifted ‘scarer’; become Captain Jack Sparrow, the sword-wielding pirate; or transform yourself into Mr. Incredible, one of the world’s greatest crime-fighters. Battle enemies, solve puzzles, overcome obstacles and complete a variety of other unique quests.

Or create your own world! Unlock virtual toys, characters, buildings, weapons, gadgets and more — and bring them into the Disney Infinity ‘Toy Box’ where you can mix them all up to create your own game. In the Disney Infinity Toy Box, there are no rules and you can create any adventure you want. Share your creations with your friends with up to 4-player co-op play. The more you play, the more you unlock so the story never ends. It’s up to you and your imagination — infinite possibilities, infinite ways to inspire your imagination!

The battle of humans against an invading alien force erupts in The Bureau: XCOM Declassified, a new story and unique gameplay experience set inside one of gaming’s most storied and beloved franchises. Set in 1962 at the height of the Cold War, The Bureau tells the origin story of the clandestine XCOM organization’s first encounter with a mysterious and devastating enemy. Originally established as America’s covert defense against the Soviet Union, The Bureau must adapt and overcome a threat unlike anything the world has faced before. As special agent William Carter, players will call the shots and pull the trigger, leading their squad of agents in the high-stakes secret war for humanity’s survival. Paramount to repelling the outside threat is The Bureau’s ability to cover-up the enemy’s existence in order to prevent worldwide panic.

In the spirit of the XCOM franchise, The Bureau’s calculated combat design requires players to think and act tactically. The game’s third-person perspective gives the player a sense of spatial awareness and grants them the freedom to transition in and out Carter’s unique Battle Focus ability seamlessly — heightening the tactical shooter action. The Bureau also fully embraces the concept of permanent consequence. As our last line of defense, every command can mean the difference between life and death for Carter, his squad and mankind.

The United States has a military presence in two thirds of countries around the world. A group of 12 have had enough and initiate a terror ultimatum called the Blacklist — a deadly countdown of escalating terrorist attacks on U.S. interests. Sam Fisher is the leader of the newly formed 4th Echelon unit: a clandestine unit that answers solely to the President of the United States. Sam and his team must hunt down these terrorists by any means necessary, and stop the Blacklist countdown before it reaches zero.

Unleash the power of the most lethal agent to ever exist. You’ve been given the ultimate freedom to protect innocents against the Blacklist terror attacks known as — the freedom to use limitless force, to break every law, and to become the globe’s deadliest operative. If you succeed, the President of the United States will deny you exist. If you fail, millions will die.

(Cross Buy + Cross Play PS3/PS Vita) — You can only dive into the air with the Dive button (it’s a jump) and then propel yourself toward the ground with a mighty kick, using the Kick button. Kicking while on the ground will cause you to bounce away from your opponent. The first hit wins each round; first to five rounds wins the game!

As simple as this sounds, trust that underestimating your opponent is a dangerous mistake. Movement is unorthodox, and players are unable to guard against incoming attacks. Finding the optimal spot to stand in order to score a counter is key, but actually standing in that position is a lot harder than you’d think! Players can also build up their Kick-Meter to activate Kick-Factor, a super charged mode in which your character dives higher and kicks faster. Watch your head, however, as one solid foot to the face scores a headshot and leaves you with a concussion in the next round. Stunned players don’t dive as high or kick as fast, leaving them at a massive disadvantage.