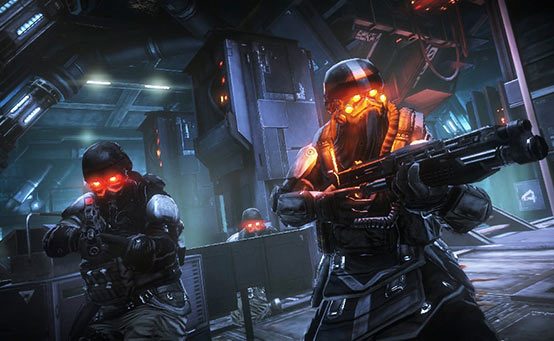 We’re just a few weeks away from the launch of Killzone: Mercenary, but gamers won’t have to wait that long to cut their teeth on Mercenary’s impressive multiplayer suite. The team here at Guerrilla Cambridge is expanding the multiplayer beta to give the servers a good test before Mercenary launches on September 10th in North America for PS Vita.

For North American users, the Open Beta for Killzone: Mercenary will be made available to PlayStation Plus subscribers on August 20th (after the Store update). Those of you who went out of your way to acquire special beta access vouchers — Perhaps through a certain promotion on PS Home? — will also be granted early access!

Then, on August 27th (after the Store update), the beta will open up further to become available to all North American PS Vita owners, coming to a close on September 3rd.

What You Should Know:

The Valor system operates by assigning each member of the Killzone: Mercenary community a Valor Card. Your Valor Card represents your earning ability in the game, with Ace being the highest rank and Two being the lowest. You will be issued a new Valor Card once every 24 hours. Your new card will be based on your recent earnings compared to all other players. This means that the value of your card can go up as well as down!

In multiplayer, players will drop an instance of their Valor Card when they die. This card can then be collected for bonus V$, and the higher the Valor of the card, the greater the reward. The suit of a players Valor card represents the weapon type they have been using. To change suits a player must make consecutive kills with a specific type:

Valor Cards collected in multiplayer and campaign (through retrieving Intel) are placed into your Valor Collection. Your Valor Collection is represented as a pack of cards and by making “hands” (four of a kind, flush, full deck) you will gain large V$ rewards.

When using sniper rifles, you can change the zoom magnification of the scope by dragging up and down on the rear touch pad when aiming down the sight.

VAN-Guard capsules are regularly fired into multiplayer maps and some single-player missions. These capsules contain a single-use VAN-guard that the player can deploy.

Most touch controls are also mapped to physical buttons:

The only enforced touch screen interactions are for Brutal Melee, hacking, levers, and some VAN-Guards.

The team at Guerrilla Cambridge put in a lot of blood, sweat, and tears to make Mercenary’s multiplayer package the most advanced experience to-date on PS Vita. We’re very excited for launch, but we think the Open Beta will definitely hold you over until September!