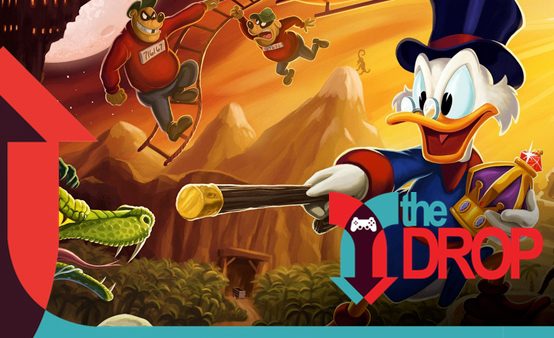 On PSN this week, DuckTales: Remastered is a hand-crafted, beautiful reimagining of one of the most cherished 8-bit titles of all time. Go back to one of the golden ages of gaming, but now refined with a level of detail that will please the most hardened devoted Disney or retro Capcom fan, alike.

Embark on an authentic DuckTales adventure, as Scrooge McDuck and his three nephews Huey, Dewey and Louie travel to exotic locations throughout the world in their quest to retrieve the five Legendary Treasures.

DuckTales Remastered takes the classic Disney platforming adventure to a whole new level. All of the visuals from the 8-bit game have been beautifully re-created as hand-drawn and animated sprites, across a backdrop of luscious, re-envisioned level backgrounds.

Furthermore, original Disney Character Voices talent, including some from the cartoon TV series, bring in-game characters to life with charm and wit, while the classic melodies of the original soundtrack are given a modern twist. The game also features an all new tutorial level where players can get familiar with the iconic pogo jump and cane swing, while Scrooge McDuck’s Museum allows players to track all their stats and compare their progress with others via global leaderboards.

Put a crew together for the second entry in the thrilling heist shooter PayDay. Don the masks of the original PayDay crew — Dallas, Hoxton, Wolf and Chains — and descend on Washington D.C. for an epic crime spree. The new CRIMENET network in PayDay 2 offers a huge range of dynamic contracts and players are free to choose anything from small-time convenience store hits or kidnappings, to major league cyber-crime or emptying out major bank vaults for that epic PAYDAY. While in D.C., why not participate in the local community and run a few political errands?

(For PS Vita) — An addictive augmented reality puzzle game for the PS Vita system that challenges players to think “outside the box”. The goal is simple: open the box and collect the items inside. But be prepared – each box has its own unique traps that require you to think creatively. There is also a multiplayer mode where communication skills and speed between players are key to opening these boxes. Take the challenge and think outside the box!

Thunder Wolves — Get in your helicopter, get ready, and go! The Thunder Wolves are the best helicopter pilots in the world, and they have already made it through countless battles. Every one of them is ready for action at any time, and ready to battle evil, no matter where it lurks. Get your helicopter airborne and get ready for some furious fireworks and top-class gaming action!

Fruit Ninja (For PS Vita) — Swipe your finger across the screen to deliciously slash and splatter fruit like a true ninja warrior. But be careful of the bombs, which are explosive to the touch and will put a swift end to your juicy adventure!

Mars: War Logs — In the destroyed world of Mars, two destinies mingle together. Two beings searching for their identity travel across a broken planet, constantly facing bloody political conflicts which tear the old colonies apart. Often divided, sometimes fighting the same enemies, both are the source of the advent of a new era…

Mars: War Logs is a sci-fi RPG action game that innovatively merges character development and light and rhythmic fights. it takes you on a journey deep into an original futuristic universe and presents you with scenarios dealing with difference, racism and environment.

Olympus Has Fallen (Blu-ray Combo Pack, DVD, & Digital) — When the White House (Secret Service Code: “Olympus”) is captured and the President (Aaron Eckhart) is kidnapped by a terrorist mastermind, disgraced former Presidential guard, Mike Banning (Gerard Butler), moves to action. As the national security team scrambles to respond, the secret service ground team is wiped out and it’s up to Banning to retake the White House, save the President and avert an even bigger crisis. Directed by Antoine Fuqua (Training Day) and also starring Morgan Freeman, Angela Bassett, Melissa Leo, Ashley Judd and Rick Yune.