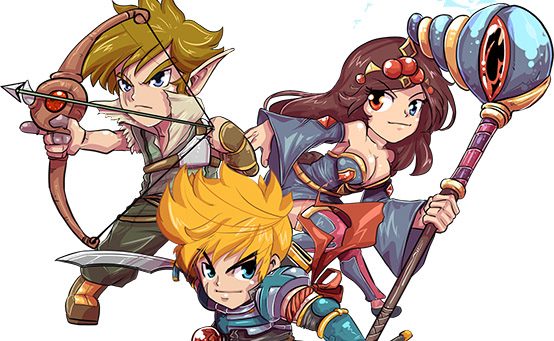 Hi RPG and indie fans! We’re excited to announce that Rainbow Skies is coming exclusively to PS3 and PS Vita in 2014.

Rainbow Skies is an indirect sequel to our RPG from last year, Rainbow Moon, which was nominated as the “Best Indie Game” in the PSN Gamers’ Choice Awards 2013.

Taking a lot of fan feedback into consideration, we’ve been working on Rainbow Skies for nearly a year and are now eager to tell you more about the project. First, Rainbow Skies is a new game that takes place in a new world, with new characters, monsters, and a story that isn’t linked to its predecessor. The world of Rainbow Skies stretches over two parallel worlds, with strong visual variety, and 50 dedicated background music tracks.

Apart from providing the new content and features, we’re absolutely staying true to our roots. Fans of traditional RPG play can once again look forward to turn-based battles, free world and dungeon exploration, extensive character development, and lots of optional goodies. Including the ability to play across both PS3 and PS Vita.

I hope that I’ve sparked your interest in Rainbow Skies! If you have any questions, post them into the comments and I’ll get back to you. For updates, make sure to check out Rainbow Skies’ official website, and follow us on Facebook and Twitter.

Thanks for all your amazing support!