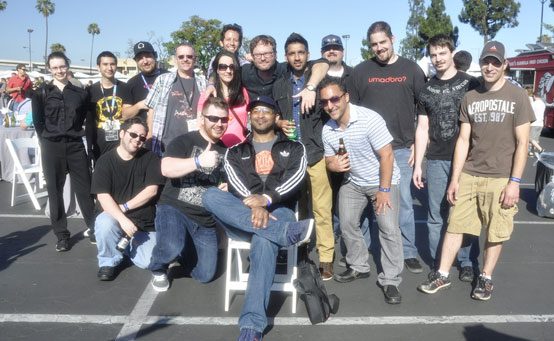 A historic E3 has come to a close and it was our honor to be able to share the experience with some of our fans. A small subset of our PlayStation MVPs, a group of PlayStation enthusiasts recognized on our official community forums, were invited to attend the show, our press conference and a few special demos of some upcoming titles.

PlayStation MVPs are fans that live and breathe PlayStation, while also providing critical feedback on our products. Although we can’t divulge all the criteria, PlayStation MVPs tend to have high Trophy counts, are active members of the community and are knowledgeable about all things gaming related. Think you’d be a good fit in our MVP program? Feel free to apply.

While at the show, our MVPs were free to explore at will, but the community team also set up a few sessions with publishers and developers such as Konami, Activision, Sony Santa Monica and Naughty Dog. Often meeting up with producers, the MVPs played Castlevania Lords of Shadow 2, Hohokum, The Last of Us, Skylanders Swap Force and Diablo III on PlayStation 3. The MVPs were also treated with a demo of Bungie’s highly anticipated Destiny. To close the show, our MVPs played Johann Sebastian Joust with the creator of the title at the IndieCade booth.

One of our MVPs, Ray McClean, aka WrekGar, had this to say:

“This has been a greatest experience I’ve ever had at E3, meeting my other fellow MVP’s along with Guy Longworth. I got to sit in at the press conference, which blew my mind with games like inFamous: Second Son, Drive Club, Beyond Two Souls, The Last of Us and Gran Turismo 6. The convention center was jammed packed with people lines were everywhere at the PlayStation booth.”

The MVPs take the Konami booth by storm to try out Castlevania: Lords of Shadow 2.

MVPs were treated with a demo of Destiny.

MVPs compete in a Johann Sebastian Joust tournament on the last day of the show.