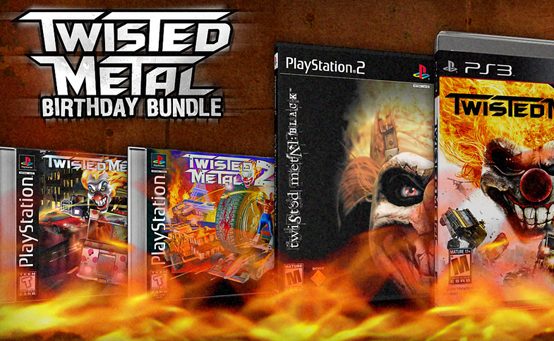 Hey all! I wanted to drop by PlayStation.Blog to help celebrate the one-year anniversary of Twisted Metal for PS3!

Seems like only yesterday some of y’all were telling me I was an idiot for focusing the new game on three characters versus a larger cast like we did in the earlier TM games. Ah, good times, good times.

But seriously, on behalf of myself and the amazing Twisted Metal teams from Eat Sleep Play and Sony, please allow me to say thanks to all of the Twisted Metal fans who showed up to support this latest explosion of carnage and meaty gameplay.

While our online community is by no means the biggest in gaming, it’s so exciting to see that it’s very much alive and kicking. It’s easy to find games, and new players are hitting the scene each and every week. We’ve gone through a number of post-launch tuning passes, and other than a handful of annoying glitches we just can’t address (remote bomb transportation, anyone?), we feel the multiplayer in this new Twisted Metal (both online and 2-4 player local splitscreen) is the best it’s ever been!

So jump online this week a-…huh? What’s that you are saying now?!? You haven’t even tried the new Twisted Metal yet?!? And you! Yeah, the one wearing the Battletoads sweatshirt standing in the back trying to ‘blend in’. You say you’ve never tried anyTwisted Metal game?!? Well land sakes alive, you’ve done come to the right Twisted Metal PS3 Anniversary post! Check this out:

Starting later today, February 12th and running for only one week, PSN is running the following Twisted Metal sale:

So there you have it. I hope you agree: PSN is throwing Sweet Tooth and the gang one hell of a birthday party! I hope you’ll be there to help celebrate some of the best car combat the biz has to offer (if I may say so myself!) And I hope to see you online with Twisted Metal PS3! It’ll be fun to kill you!

Oh and don’t forget: go to TwistedMetal.com to create your very own custom vehicle skins to take into your online battles and to download from the countless skins the community has already created and uploaded!

Stay Twisted y’all! And thanks so much – as always – for all of the amazing support you’ve given the series over the years!