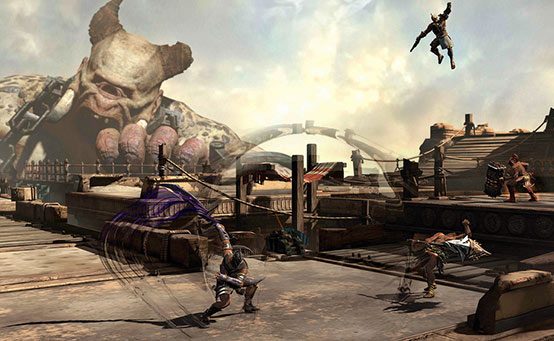 Warriors of PlayStation Plus, our God of War development team here at Sony Santa Monica is proud to break open the arena gates to our God of War: Ascension Multiplayer Beta for you later this afternoon. What does this mean?

Be sure to visit our official GodofWar.com website where we’ve just launched a suite of new Beta strategy sections: God Profiles, Basic and Intermediate Tips you won’t find in-game, and your keys to victory in each mode.

BEGIN A WARRIOR, RISE A CHAMPION

Our Multiplayer Beta is a taste of the full-game experience, here’s what you’ll see featured:

Favor of the Gods (Deathmatch)

This being God of War, one does not simply walk into the Ascension Multiplayer Beta and think it ends there. Here are a few things not in the Beta that will be in the final game March 12th:

Our development team has been burning the midnight oil, pouring every last ounce of passion into creating a Multiplayer experience worthy of the God of War pedigree. This has been no ordinary journey for our team. Epic in every way, it has been a new beginning. Whether or not you have been following our transparent making-the-game series, Unchained, here is the five-minute story of what’s been a three-year journey in creating something once thought impossible. Enjoy our latest episode, A New Beginning.

By the way, if you made it this far and you love God of War’s single-player experience, fear not: a wealth of new information is coming sooner than you think.