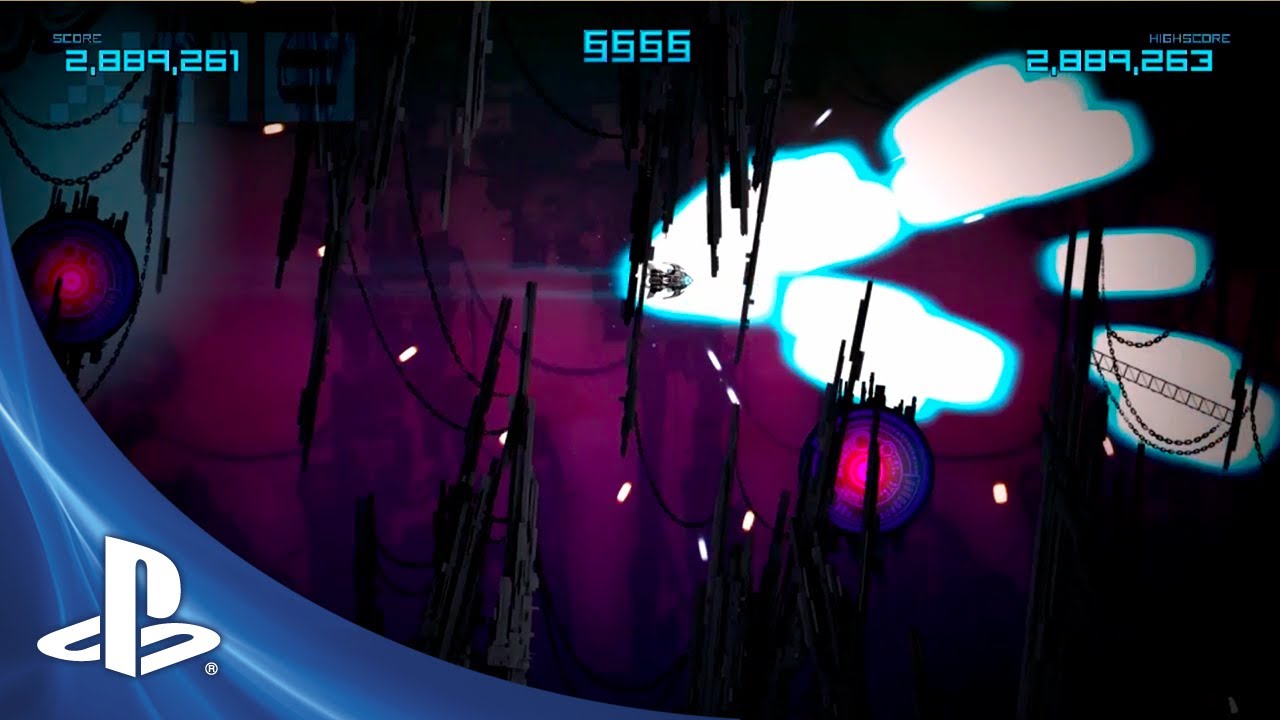 Good morning earth! My name’s James Whitehead, I’m the boss at Boss Baddie and I’m here to talk about our twin-stick shooter Big Sky Infinity, coming to PS3 and PS Vita with today’s PSN update. Buy it on one system for $9.99, and unlock the other version at no additional cost!

Big Sky Infinity is a lightning-fast, randomly-generated game that adapts to how you play – it’s never the same game twice! You pilot a spaceship that’s flying straight into an alien armada. The further you progress, the harder it gets, with giant bosses, streams of enemies and special things we call ‘Events’. Your ship is equipped with a drill that lets you smash through planets and meteors. It’s less about memorisation and more about reactions and adapting!

Destroying enemies will cause them to drop little starbits which are spent upgrading your ship. Pretty soon you’ll have the most splendid spaceship this side of Jupiter. But the stronger your ship gets and the longer you last, the tougher the bad guys will be!

You’ll unlock other modes, such as Nightmare – the complete opposite of a walk in the park. Then there’s Pacifism, where your laser cannons have been jammed with flowers. And we’ve got an endurance-style mode for Infinity too!

We’re utilizing unique aspects of PS3 and PS Vita for our multiplayer modes. On PS3 you’re able to play with up to three friends (or enemies, frenemies or relatives). It’s chaotic fun – you can help each other out by sticking together to power-up each other’s weapons, or compete to get the most points.

On PS Vita we have an asynchronous multiplayer mode, where you can challenge PSN friends (or randoms!) to take on your high scores in a turn-by-turn series of matches. We had a lot of fun playing this mode during development!

Finally, we have these things called Events. Now, events are crazy, gameplay-shifting happenings that occur every so often, and when you get very good some will happen at the same time!

My personal favorite is the Black Hole event. I won’t spoil what happens, but it would make for a great B-movie plot. But there’s also the Worm Hole event, where you’ll tear through the fabric of space in a swirling vortex. And look out for Hell Cascade, where bad guys get bored of not shooting lasers at you, and decide to do just that.

There’s a lot to see and do in Big Sky Infinity, from the screen-filling, ever-changing bosses, to the gameplay-altering events, to the cheeky cockney narrator.

We hope to see you on the leaderboards when PSN updates later today!