UNCHARTED: Fight For Fortune Coming to PS Vita in December 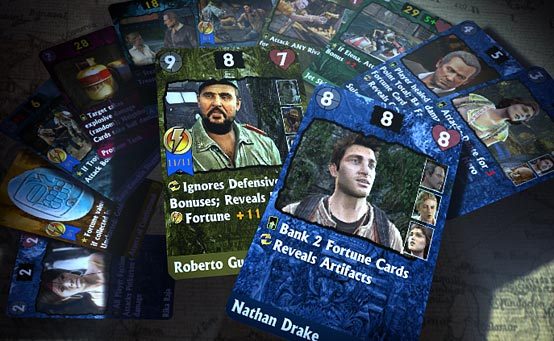 Hi everyone! I am excited to announce UNCHARTED: Fight for Fortune, an original title coming to the PlayStation Store exclusively for PS Vita this December.

UNCHARTED: Fight for Fortune is an action-adventure turn-based card game featuring the heroes and villains from the UNCHARTED universe. Take a look at the new trailer of the game below to give you an idea of how combat works.

So you’re probably wondering, how exactly does Fight For Fortune work? I’ll explain. The core gameplay in UNCHARTED: Fight for Fortune involves creating a team of Faction cards featuring heroes, villains, and mercenaries from the UNCHARTED universe, then using that team to defeat your opponent while defending yourself from their attacks.

The rich lore that surrounds the UNCHARTED universe gave us the opportunity to create UNCHARTED: Golden Abyss, complete with lush, artifact-filled environments. With over 300 treasures to be found, we wanted to find a way to allow our fans to delve deeper into the artifact collections and mysteries of the UNCHARTED universe. Along with the release of UNCHARTED: Fight for Fortune, we will also release a new patch for UNCHARTED: Golden Abyss that will power up the artifacts that you’ve collected for immediate use within Fight for Fortune. Using the artifacts found within Golden Abyss, you can go to battle with other players as well as AI opponents. The game can also be played independently of Golden Abyss, so owning the PS Vita title is not required.

Bend Studio Co-Director John Garvin and I have led the charge on UNCHARTED: Fight for Fortune since the launch of Golden Abyss to take the mobile UNCHARTED experience even further. In addition to our close collaboration with Naughty Dog, we are also pleased to introduce One Loop Games, a team of talented industry veterans who worked closely with us to chart new ground into the UNCHARTED universe.

UNCHARTED: Fight For Fortune is launching December 4 for $4.99 on PS Vita. There will be much more to talk about as we quickly approach the launch date, including some great additional DLC on launch day, so keep your PS Vita handy and get ready to go fortune hunting!