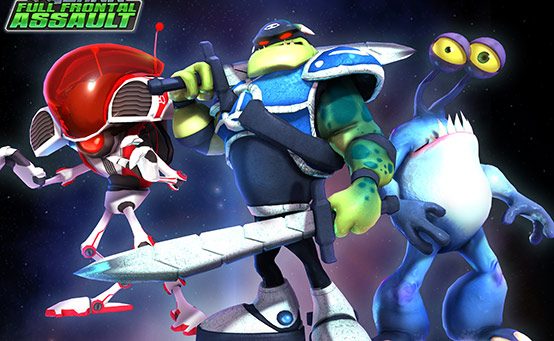 As many of you may know, when you purchase Ratchet & Clank: Full Frontal Assault for PS3, you’ll also be entitled to receive a downloadable version for your PS Vita system with cross-save and competitive cross-play support.

Our friends at Tin Giant have been working hard to bring Insomniac’s PS3 game to PS Vita and to ensure that your experience is packed with all the action and polish you’d expect from a Ratchet & Clank game. In order to provide the best gameplay experience possible, the PS Vita version of Ratchet & Clank: Full Frontal Assault will be coming out in January 2013. The PS3 version will still be available for purchase at participating retailers and on PSN starting on November 27, 2012.

As a reward to fans for their patience, we will be giving them the first piece of DLC for the title, the Mini-Boss Skin Pack, as a bonus with their purchase of Ratchet & Clank: Full Frontal Assault for PS3. This skin pack features three fan-favorite boss characters from past Ratchet & Clank games, including Chainblade from Going Commando and the Two-eyed Tyrhrranoid from Up Your Arsenal. Take a peek at these new skins in the screen below.

Thanks for your support and patience for the PS Vita version of Ratchet & Clank: Full Frontal Assault. We can’t wait to see all of you online unleashing the multiplayer mayhem on PS3 starting November 27, and then on PS Vita in January 2013.