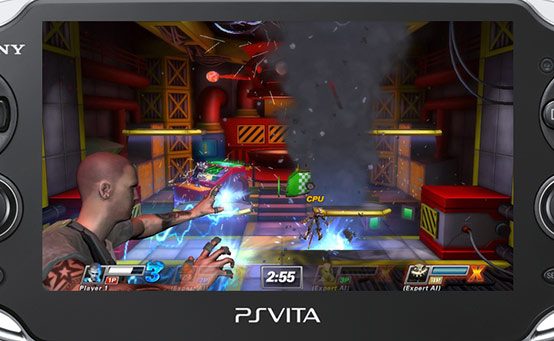 As fans of Bluepoint know, the studio has worked hard over the years to give gamers the highest quality remasters for classic titles God of War, ICO and Shadow of the Colossus, and Metal Gear Solid. Now, for PlayStation All-Stars, we’ve taken our passion to the next level. Our mission: To create the full PS3 experience of PlayStation All-Stars on PS Vita.

By that, we don’t mean a game with similar features carrying the same name. PlayStation All-Stars is about showcasing the possibility of true Cross-Play between PS3 and PS Vita. The feature richness of the PS3 version’s arcade mode, online modes, player progression system and its unlockables and customization, etc… it’s all here on PS Vita. The connectivity and gameplay is a frame-perfect, seamless experience.

The only separation between the versions is where players choose to play, not which platform. Four friends can get together with four PS Vitas and battle via an ad hoc connection. You and a friend can grab your PS Vitas, team up online and compete against everyone else playing from their PS3s or PS Vitas. Or bring your PS Vita over to a friend’s house, and while three of them elbow each other and mess with each other’s controllers on the couch, you can lounge anywhere you want, playing against them with a handheld screen all your own. SuperBot serves up PlayStation All-Stars on the PS3 and Bluepoint makes it feel like the PS Vita was always its home. You’ll set down your Dual Shock, pick up your PS Vita, wonder how the PS3 squeezed into it, and continue your progression up the leaderboards.

It’s been awesome watching the R&D behind recreating the PS3 version’s high-quality graphics on the PS Vita. We could not settle for a reduced graphical experience – no one should! – so we set off on a journey of crazy problem solving for each character, environment and effect. Bringing the very best out of this portable platform has led our team at Bluepoint to hit back with a combo of high-end math and old-school dev tricks. It hasn’t been easy, but we’re doing it, and all with the game blazing at 60 frames per second. PlayStation All-Stars makes you believe that with PS Vita you have a PS3 in the palm of your hand.

It’s one thing for the graphics to impress. It’s another to ensure the PS Vita provides the genuine experience for fighting game fans. We regularly grab raw HD data and 240 FPS video to check that input latency, rendering fidelity and “the awesome” remains tight. Running at 60 FPS is as much for the smoothness of the graphics as for the controls. It’s important that there are no advantages (or disadvantages) due to the different hardware – no network lag, no input lag, so PlayStation All-Stars on PS Vita must be — and is — tuned to have the same tight gameplay responsiveness. From button press to character action, the quality of fighting is upheld to PS3 standards. We also take advantage of both SuperBot and PlayStation being in California – Bluepoint is in Austin, Texas – working with them to tune network code and optimize bandwidth, to deliver the best possible online experience.

There’s much more cool stuff to talk about, but for now, get ready to take the PS3 PlayStation All-Stars experience on the road. As we do not endorse driving while brawling, we recommend you find yourself a designated driver… then have them find the nearest gaming retailer, insist they buy a PS Vita, and kick their butt.