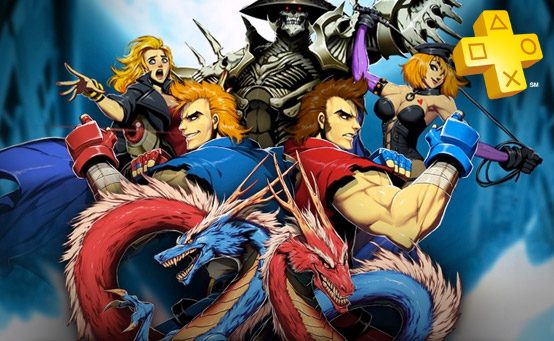 We’ve got a lot cooking for PlayStation Plus members this week with Double Dragon Neon and Scott Pilgrim vs. the World joining the Instant Game Collection, among other great perks. Read on to learn more!

Free for PlayStation Plus Members (Regular Price: $9.99, PS Plus Price: Free)
After 25 years, the original beat ‘em up is bringing pure over-the-top baditude to PSN, and it’s free for PlayStation Plus members on its first day of release! In Double Dragon Neon, Billy and Jimmy are kicking butts and taking names as they search for their girlfriend Marian (she seems to have a habit of getting kidnapped). This time, her disappearance is at the hands of the supernatural scourge, Skullmageddon! Face off against a gaggle of goons, some familiar (Williams, Linda, and Abobo, of course!) and some that are absolutely out of this world.

Scott Pilgrim vs. the World: The Game

Free for PlayStation Plus Members (Regular Price: $9.99, PS Plus Price: Free)
This adaptation captures all the fun and style of the critically acclaimed Scott Pilgrim comics, and the humor of the revered movie, and distills it into a retro-influenced side scrolling beat em’ up, complete with 4-player co-op. With awesome 16-bit animation by world-famous pixel artist Paul Robertson, and a hyper-active soundtrack from chiptune heroes Anamanaguchi, it’s hard not to love Scott Pilgrim, and now you can play it as part of the Instant Game Collection.

Exclusive Early Access for PlayStation Plus Members and 10% off (Regular Price: $9.99, PS Plus Price: $8.99)
SEGA’s new release of the classic Dreamcast title is hitting PlayStation Plus users first! Get it a week before anyone else, and play all the levels while listening to those classic JSR phat beatz (complete with the original world-wide soundtrack) that made this title a true original. This time, of course, you get it with full Trophy support, sharp HD visuals, and you’ll be the first to play it on current-gen consoles.

That’s it for now, check back with us next week when we’ll have more PlayStation Plus news to share! In the meantime, leave your comments and thoughts on Plus below, or join the conversation on the PlayStation Forums in the Plus section.