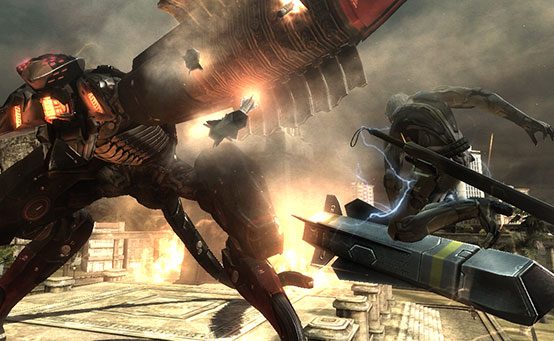 The opening tutorial mission wastes no time in showing off the game’s much-touted Blade Mode, a surprisingly intuitive mechanic that boasts palpable precision. You press and hold L1 to slow time, then hold the right analog stick to wind up your slice. Hold the stick to the right and Raiden will draw his sword to the right; release the stick and he’ll slash from right to left, cleaving obstacles and baddies in two. It’s a devastating and deeply satisfying attack, but it’s slow and expends fuel cells so it’s best reserved for surgical strikes.

Blade Mode has been much discussed, but less has been said regarding Revengeance’s impactful combo system. You can tap Square and Triangle (wide attack and strong attack, respectively) to fire off rapid slashes and acrobatic flip kicks ala Dante in Devil May Cry. Mixing and matching Blade Mode with the faster hack-and-slash strikes should lead to some visually arresting combos, as well as some of the gnarliest onscreen violence this side of God of War. It’s also tactically valuable; landing the Blade Mode combo finisher on an enemy soldier’s weak spot and tapping Circle at the right moment makes Raiden plunge his fist into his victim’s spine and claim a fuel cell for a mid-battle top-off. What energy crisis?

Other fun details abound. Pop off a Blade Mode slice and you might lop off your enemy’s weapon arm, or foot – this came in handy during a battle against a rampaging Gekko biomech. Taking to the air to avoid the Gekko’s lethal kicks, I repeatedly drove my sword into its cyborg head before severing one of its oversized legs with a well-timed mid-air Blade Mode slice, bringing the giant crashing down. The demo introduced me to Ninja Run, a scrambling Dash that drains energy but can nimbly dodge obstacles, before culminating in a battle against an AI-controlled helicopter. I pounded it with homing rockets – Raiden can carry one sub-weapon in addition to his sword – until I was prompted to Ninja Dash up a volley of ‘copter missiles, skipping from one to the next like stones in a creek. I vaulted over the chopper, calmly looked downward, and used Blade Mode to shred it to smithereens while I drifted by. Yes, this was exactly as cool as it sounds.

But Revengeance represents just one step in series creator Hideo Kojima’s master plan for Metal Gear. During PAX 2012, Kojima held a panel to formally announce Metal Gear Solid: Ground Zeroes for PS3 and show off its revamped technology and open-world mission design to the North American public for the first time. In the panel hosted by Geoff Keighley, Kojima shared his inspiration for creating one of the first stealth-centric videogames 25 long years ago. “Most games were about attacking enemies,” Kojima remembered, “but I wanted to try something different. Honestly, I didn’t think it would continue for 25 years!”

Kojima touched on the layered origins of protagonist Solid Snake, whose codename was designed to serve dual purposes: communicating the game’s stealthy focus and honoring Escape From New York’s gravel-voiced Snake Plissken (Kojima is a devoted John Carpenter fan). Big Boss was developed as a foil for Snake and served to reinforce what Kojima has long seen as the series’ underlying theme: surpassing a predecessor. That theme and Solid Snake’s rising popularity were the key drivers for Raiden’s controversial starring role in Metal Gear Solid 2, a departure that fans debate to this day. “Solid Snake was becoming this legendary hero and I wanted to build on that,” Kojima said of his infamous MGS2 protagonist switch. Metal Gear Solid 4 flipped convention yet again, with players finally reuniting with an aged Solid Snake only to find themselves longing for the power of a young, spectacularly reinvented Raiden.

Kojima also briefly touched on his plans for Columbia Pictures’ recently announced Metal Gear Solid film, playfully suggesting that actor Hugh Jackman would make a “pretty cool” Snake. But he cautioned that the project was very early in the planning stages and he had no announcements to make regarding cast and crew. “There have been talks about this for 15 years. I want to make sure it’s done right. It’s a very important, difficult project.”