PSN PLAY: Last Chance to Download Some Great Games and Get Money Back 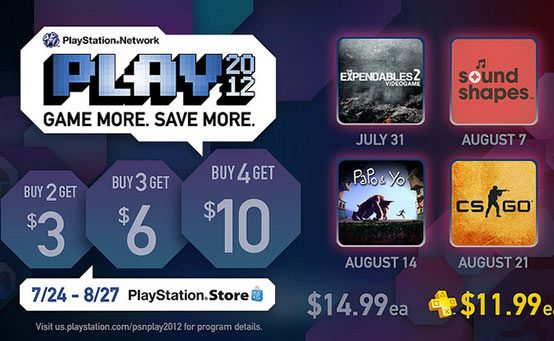 The clock is ticking — our summer PSN PLAY promotion is coming to a close very soon, but there’s still time to take advantage of it. Purchase titles from our PLAY lineup through August 27th and you’ll be eligible for PSN vouchers of varying amounts, depending on how many you get. Buying two games nets you $3, three games, $6 and if you grab all four titles you get $10 back in your PSN wallet.

The game offerings are quite enticing – there’s our new No. 1 selling PSN game for PS Vita, Sound Shapes (which comes with its PS3 version at no additional charge), indie darling Papo & Yo, fan-favorite Counter-Strike: Global Offensive and the action-packed Expendables 2 Videogame.

As an added bonus, PlayStation Plus members can still nab Counter Strike: Global Offensive for 20% off the retail price. To learn more about PSN PLAY and the rest of the games available on PlayStation Network, click here.

If you want more information on the games included in the promotion, look no further:

One of the gaming world’s most celebrated first-person shooter series makes its way to PSN with Counter-Strike: Global Offensive, offering an updated take on the tried-and-true objective-based gameplay. Pitting teams of counter-terrorists against terrorists, Global Offensive features a number of classic game types like Bomb Diffusal and Hostage Rescue, and introduces two new modes: Arms Race and Demolition. Up to 10 players can engage in online matches, and the game also supports PlayStation Move, giving players a brand new way to experience the classic Counter-Strike gameplay.

Play, Compose and Share in a unique take on the classic sidescrolling platformer where your actions make the music. Play through a unique campaign that fuses music and artwork into a classic 2D platformer featuring artwork by Pixeljam, Capy, Superbrothers and more, with music by Beck, Jim Guthrie and Deadmau5. Additionally, Sound Shapes is a Cross-Buy title, so you only need to purchase it once in order to get the game for both PS3 and PS Vita. Create and upload your levels on either platform for others to download and remix on their own.

PSN exclusive indie game Papo & Yo tells the story of a young boy, Quico, and his best friend, Monster. Taking place in a dreamlike world inspired by South American favelas, Papo & Yo entices players to explore and solve puzzles as Quico, while simultaneously preventing Monster from eating poisonous frogs, which throws him into an uncontrollable rage.

The latest and most explosive co-op action shoot’em up title coming to PSN, based on the popular movie franchise this game leads players right into the upcoming The Expendables 2 movie. The story begins when four Expendables (Barney, Gunner, Caesar and Yin Yang) are hired to rescue an extremely valuable, kidnapped Chinese billionaire. Featuring vehicular combat, four-player co-op story and challenge modes, and a wealth of exotic locales, The Expendables 2 Videogame offers everything an action-game fan could want.
counter-strike: global offensivepapo & yoplaystation gamespsn playsound shapesthe expendables 2