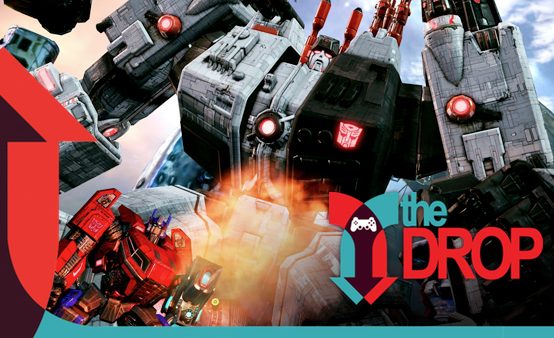 On PS3 this week, Counter-Strike: Global Offensive brings deep tactical matches, iconic multiplayer maps, and PlayStation Move or mouse-and-keyboard support to PSN. The war on planet Cybertron rages on in Transformers: Fall of Cybertron, which takes fans through the final, darkest hours of the civil war between the Autobots and Decepticons as they fight for control of their dying planet — buy it on Blu-ray or PSN Tuesday.

On PSN, Retro/Grade is an innovative game that fuses the white knuckle thrills and over the top visuals of a shooter with the broad appeal of a rhythm game. Metal Gear Solid 2: Sons of Liberty and Metal Gear Solid 3: Snake Eater both receive the full digital treatment and arrive on PSN for PS3 and PS Vita. Enjoy this week’s The Drop.

Transformers: Fall of Cybertron — With the stakes higher and scale bigger than ever, fans will control an unprecedented assortment of Transformers characters armed with authentic transformation designed around their unique abilities, including Grimlock’s nearly indestructible T-Rex form and the legendary Combaticons forming into the colossal Bruticus. Taking the franchise’s competitive online play to all-new heights, Transformers: Fall of Cybertron pits players head-to-head in blistering Autobot vs. Decepticon matches.

Metal Gear Solid 2: Sons of Liberty (PS3 and PS Vita, sold separately) — Once underway, players take the role of a one-man army determined to stop a deadly high-tech weapon from falling into the hands of a highly elite resistance group known as Dead Cell. Users must once again utilize their skills in stealth, weaponry, and counter-terrorism to fight off the competing powers; and as they progress through a twisting storyline, eventually destroy the gigantic war machine, Metal Gear Ray.

Metal Gear Solid 3: Snake Eater (PS3 and PS Vita, sold separately) –– In the struggle to achieve world peace and world dominance in the Cold War period, rivaling governments are secretly developing weapons technology that could threaten the future existence of life. Destined to be the first, a race ensues to become the ultimate nation. A special elite tactical soldier is summoned to penetrate deep in the heart of enemy territory and obtain Intel about “Metal Gear”, a prototype weapon with nuclear capabilities. This is your mission and you must infiltrate alone. As “Naked Snake,” you must outsmart enemies with camouflage, close-quarters combat, stalking, interrogating, climbing, hunting and treating injuries in this critical chapter of the Metal Gear saga.

Retro/Grade — Retro/Grade stars ace fighter pilot Rick Rocket who has just saved the universe. Unfortunately, the massive destruction he left in his wake has caused a temporal anomaly that reversed the flow of time. You must assume control of Rick’s spacecraft and fight through the epic space battle … in reverse.

Michael Jackson: The Experience — He is the legendary King of Pop! Featuring an immersive and interactive experience for the Playstation Move that enables players to step into the shoes of Michael Jackson himself and re-live his most iconic moments through their own performance. The unparalleled tracklist features many of MJ’s biggest hits including Billie Jean, Beat It, Smooth Criminal and many more. There are an array of his awe-inspiring dance moves for players to learn and emulate within the game. Additionally, fans can sing along and test their vocal skills while immersed in the performance.

Jojo’s Bizarre Adventure HD — Based on the popular comic book series, JoJo’s Bizarre Adventure HD is an arcade fighter that lets you duke it out with your favorite characters from the comics. JoJo must travel to Egypt to find a cure for his sick mother. Each fighting character has his or her own Stand, a guardian spirit that aids in the battle. Unlike mortal humans though, Stands can reanimate quickly after defeat, so use this to your advantage as you try to defeat the evil Dio and his minions.

Gungrave: Overdose — Developed by Red Entertainment, Gungrave O.D. takes the carnage-based formula of the original, adds more characters and some new abilities to the mix. Expanding on its predecessor, it throws you in a cel-shaded world of exaggerated firefights and near delirious action sequences. In addition to franchise hero Grave, there are two additional fighters to choose from: Rocketbilly Redcadillac and Juji Kabane, who meet up with Grave at the beginning of the game. With the exception of the very first training battle, all three characters have the same set of missions to go through and deliver a different experience.