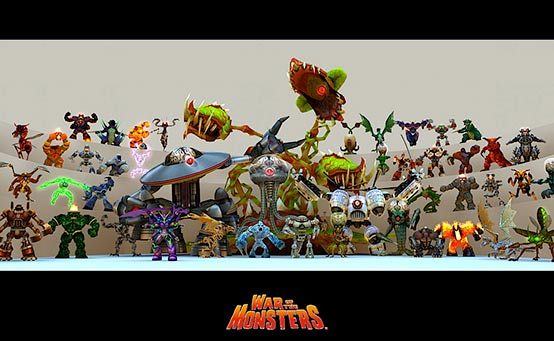 About a billion years ago, I worked on a PS2 game called War of the Monsters. In fact, it was my first game as a producer — I had the luxury of working with a great team and together we made a really awesome and unique fighting game. War of the Monsters was built on the theme of vintage monster B-movies, with mega-crap-loads of building destruction and tons of hot monster-on-monster action! But totally work-appropriate hot monster action. Get your minds out of the gutter!

We didn’t just have a ton of fun making the War of the Monsters — we were very happy with how the finished product turned out. The game was ridiculously fun to play, and players around the world loved it! So when Jeff pinged me the other day to tell me that War of the Monsters is going to be released as a PS2 Classic on the PS3 I was crazy-excited. Of course, I wanted to write a quick post!

The first thing I did was dig through some of my old archives and find some really cool old artwork from back when we were developing War of the Monsters. The image below is something I put together during the game’s production to summarize the core combat mechanics in the game. We used it internally to make sure everyone on the team understood the basics of game’s combat. What’s really cool is that now, almost a decade later, you can look at this combat sheet and still get a quick overview of the game before you download it from the PlayStation Store tomorrow.

Here’s another cool image I found. It’s an early color comp I created to show the team how we were going to reference old movie posters to develop our color and lighting palette, and how we’d adapt it for our game environments. Man, I’m having fun digging through all my old files. Thanks, Jeff!

These were internal docs, so cut me some slack on their style. When you’re preparing materials for internal studio communication it’s often not as flashy or super-produced like you might see from a full-up marketing team. And hey, this stuff is almost a decade old!

Oh snap, check these out! These are the level-loading screens for each of the battles when you play through single player battle mode! These were all painted by a super-talented artist by the name of Owen Richardson, who also worked with Dave Jaffe and Scott Campbell on the new Twisted Metal for PS3.

Here’s another bit of trivia: Bet you didn’t know that I also did some 3D modeling on War of the Monsters too — back in those days everyone had to do a bit of everything! This is Preytor; I had a great time modeling and texturing him. He’s a massive praying mantis with a nimble fighting style, and one of only two monsters in the game with the ability to fly.

It’s crazy to look back on War of the Monsters and see those low-poly, low-res PS2 graphics — a reminder of how far we’ve come with the PS3. One thing remains the same though: great gameplay is timeless. Luckily, War of the Monsters is super-fun to play and holds up nicely. I hope you all download this PS2 Classic from your PS3 on Tuesday when the Store Update goes live!

And in case you were wondering, we are still totally hard at work on Starhawk! We have a ton of stuff ready for release very soon — including our 1.3 Update, which has a bunch of new features and fixes, as well as the awesome (and free) Cypress Map Pack! Here’s a sneak-peek at a couple screen shots of Cypress, but check back here on the blog real soon for a complete breakdown of the Starhawk 1.3 Update, as well as more in-depth info on the new free map pack!

Stay tuned and, as always, rock on!