The Surprising Origins of Gravity Rush for PS Vita 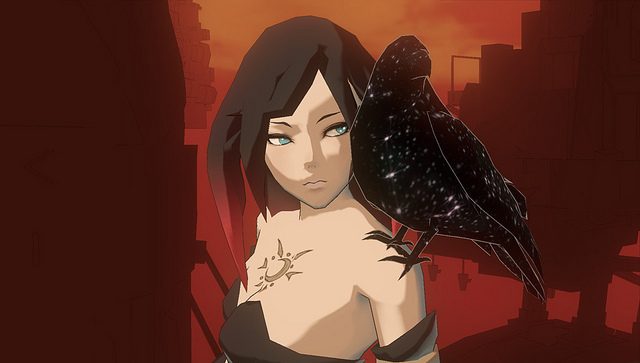 Based on the sheer number of questions we get about Gravity Rush, it’s clearly one of the most-anticipated PS Vita games coming along in the next few months. Featuring stunning, cel-shaded visuals, Vita-tailored controls, and gravity-based gameplay, it’s no wonder that reviewers across the Pacific have awarded the game (known as “Gravity Daze” in Japan) high marks.

So when the game’s creators dropped into San Francisco last week for Game Developers Conference, I jumped at the chance to speak with them.

In this conversation (shared with IGN’s Ryan Clements – look for his story soon at Vita.IGN.com), Game Director Keiichiro Toyama and Art Director Yoshiaki Yamaguchi talk about the game’s original platform (not PS Vita!), why they avoided an overly Japanese aesthetic, and the surprising inspiration for its unique gravity-based gameplay.

Ryan Clements, IGN: How did you get started on the project? What are your roots in the industry?

Keiichiro Toyama, Japan Studio: I was studying art as a student. I joined Konami as a graphic artist and become director on Silent Hill, and then joined Sony and worked on Siren: Blood Curse.

Jeff Rubenstein, PS Blog: The tonality between Silent Hill and Siren is so different than Gravity Rush. Did you get sick of scaring people? Or were there different emotions that you wanted to explore besides fear?

JS: Originally, the reason I was working on horror games was not by choice. The company asked me to make horror games because they were popular. I enjoyed it to some extent. But with advanced technologies, HD and the like, making horror games with a limited audience isn’t really cost efficient. You need more money to make big games like that, and so it was becoming challenging.

So I thought, I just wanna make something that I wanted to make when I was a student studying art. So that’s how I changed direction.

IGN: So is this a game you thought about a long time ago, and you’re finally getting a chance to make it, or is it something that you came up with after you left Konami?

JS: Before I joined Konami, I already had this idea, but it wasn’t too specific. I didn’t have any idea about manipulating gravity back then. But I had an idea of a girl floating in the air…

PSB: In my 30 years of gaming, Gravity Daze is the only game I’ve ever imported from Japan – [Personal note: Gravity Daze is all in Japanese, and I’d recommend waiting for the English version here]. The friend that sent over the game included an art book that contained a lot of different variations on the main character, Kat. How did you settle on her final appearance?

JS: The main character was the most difficult thing to lock down, so we thought a lot about it. If we made something completely Japanese, then it would be only acceptable to Japanese users, and we’ll lose audience in other territories. So we avoided that. We also wanted to make a female protagonist, but we thought that in other territories there are not so many female lead characters. But Lara Croft is pretty well accepted, and we thought that the reason she was is probably because she is exotic and serious. So we wanted Kat to have that exotic feel, and even though she’s tiny, we wanted to make her powerful and strong. Like a ninja: small, but agile. By adding that, we finally fixed the character design.

PSB: I played a few hours of Gravity Daze – until my inability to read Japanese hindered me a bit. I felt that when you hovered in the air, and then picked a direction and shot off, it reminded me of Descent, where you’re in space and you can go in any direction. Then there are parts where you can levitate items and hurl them, not unlike Cole in the inFAMOUS games. What were your gameplay influences?

JS: The game I was most influenced by was Crackdown. I really liked the aspect of unlocking skills and becoming more powerful, and achieving a higher level of freedom as you become more powerful. Plus the open-world setting. I enjoyed moving in that game.

IGN: Was that open world setting decided right from the start, before the art came into place, or did that come later?

JS: It wasn’t decided at the beginning. We took a lot of different approaches. I requested not just falling vertically, but also horizontally. And we thought that an open world works better with that. This world is based in gravity, so it matches that the level becomes big not just vertically, but horizontally as well, so you can fall and travel in any direction.

PSB: How did you decide which of PS Vita’s new inputs (touch screen, six axis gyroscopes) to use with Gravity Rush?

JS: Originally, we were making the game for PS3. We came across PS Vita along the way. We played around with it, and thought it was perfect for the game, and so we switched to PS Vita.

PSB: How have you and the team reacted to the really good critical reception (38/40 in Famitsu) in Japan?

JS: We had mixed feelings, actually. We achieved something that’s unique and brand new, and we feel that should get good reviews. But at the same time, this game a little niche… so we thought it was interesting that we got such high scores.

We’ve still got a couple more months until gamers here in North America will get to explore Kat’s world. Gravity Rush floats over to this contintent on June 12 of this year.