Here’s How PlayStation Move Works in MLB 12 The Show 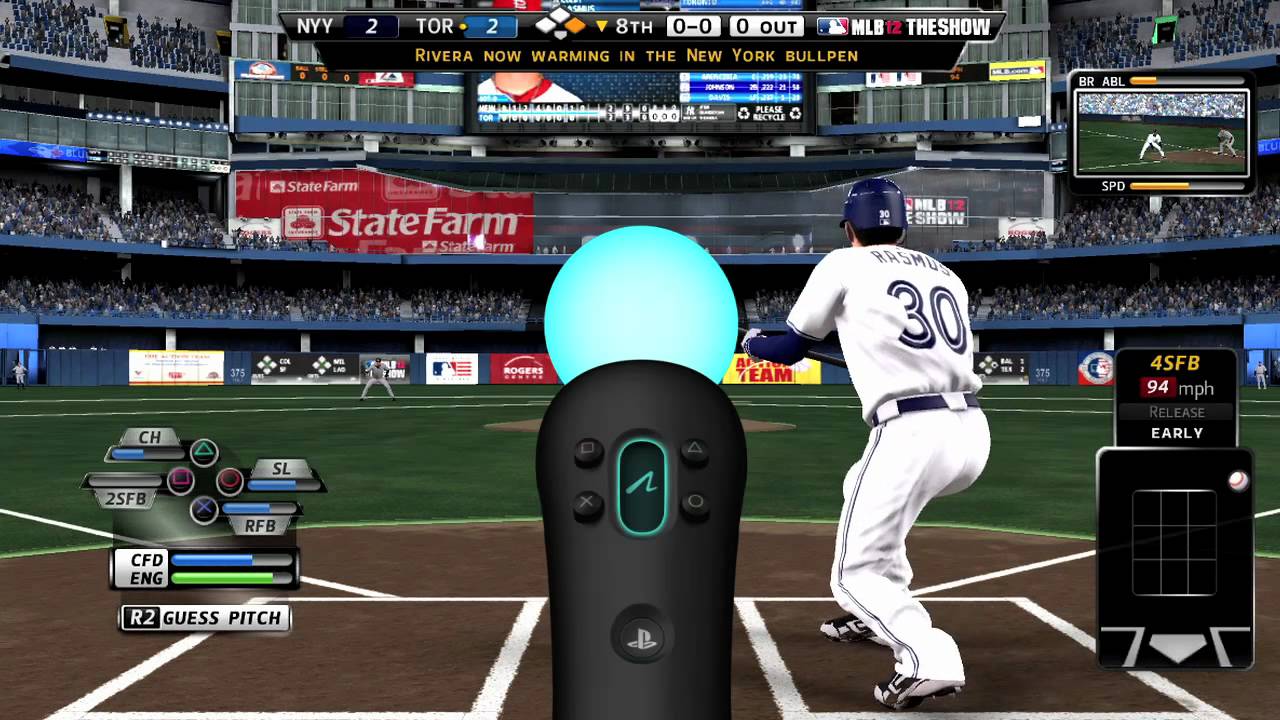 Alright MLB The Show fans, it is time to get off the couch. This year with MLB 12 The Show, you now can play the entire game (Pitching, Batting, Fielding, and Base running) using the PS Move motion controller. When we designed the controls, the overall goal was to make it as intuitive and natural as possible. Once you play it and become familiar with the controls, you will start to feel a natural connection between playing our game and playing baseball as if you were out on a diamond.

When we designed the pitching controls, the idea was to promote going through the actual motion of throwing a pitch. In order to do that, we decided to tie the velocity of the pitch to how far you reach back (away from the PS Eye) to set your “potential power” and how fast you swing your arm through to determine your “actual power”. This way, if you try to pitch by just flicking your wrist, sure you can get the Move to recognize that speed, but since you do not pull back during the wind-up, you will not be able to use 100% of your potential power. The difference could be a 93MPH vs a 98MPH fastball. Your accuracy is tied to the on-screen pitcher’s release point. The closer you release the trigger on the Move to that release point, the more accurate the location of the pitch will be. The result is a system that feels very natural and recognizes how much effort you are putting into each pitch and recognizes a very natural release point. There is a definite feeling of satisfaction in “painting the black” that you didn’t feel before. Batting is even more natural in terms of how we recognize a different type of swing. When we first designed the batting, we simply recognized how quickly you swung the bat in order to consider a swing a “contact”, “normal” or “power” swing. But after about 10 minutes of actually trying it out I realized that this was not natural. A contact swing is not a slower swing, a contact swing is performed by limiting your movement and just slapping at the ball as opposed to reaching back (loading) to get some extra power. So that is how we changed it to work in the game. The game will recognize if you load up or not. If it recognizes that you do not and you just punch at the ball, you will get a contact swing which helps you with contact, but takes away some power. On the flip side, if you load up, it will recognize that you want to drive the ball, and then, how fast you swing will determine how much power is being used. So instead of having a normal swing or a power swing, now it is dynamic. You might swing with a 42 power on one swing, or an 89 on the next. It is totally up to you. One other new feature with the batting is what we call “Full Control”. The Move is synched up with your batter and allows you to move his arms and upper body around pre-pitch to really feel connected to the batter. But to get the Move synched up correctly, you need to start in a traditional batting stance while holding the Move controller upright and still. Once the system recognizes the position it will vibrate to let you know you are synched up. (Note: You do not need to sync up the pre-pitch movement in order to swing. You can do that with or without using the Full Control system) Fielding has a completely new element never before seen in a baseball video game (as far as I know). When fielding with the Move, you have a new responsibility of catching the ball. It is very unnatural to try to navigate a defender around the field with this controller, so when playing with the Move, the AI controls the movement of the fielder for you. But instead of moving, you have to time “catching” the ball. Again using the idea that the trigger is the ball (like mentioned above in pitching), as the ball gets close to you, you need to press and hold the trigger to receive the ball. You will see an indicator under the fielder that goes from Red to Yellow to Green to help you time the catch. If you are too early or too late, the ball will bounce off of your glove for an error. Once you have the ball, you can throw to any base by swiping in a Left, Right, Up, or Down direction and releasing the trigger during the swipe. Each direction represents a base, just like with the analog throwing system. One really cool side-effect from this system is that it unintentionally created some realism. In our non-Move game, a lot of times those hot smashes to the 3rd baseman or even the pitcher got gloves automatically. Now that you are responsible for timing that catch, you see a lot of those shots eat up the defender like you are more likely to see in real life. And if you happen to react quick enough to snag one, you really feel like you earned it. The base running controls are something that completely changed from the original design and was actually an idea of the programmer who implemented it. (Go Leo!). Leo came up with the idea of using gestures to navigate runners as a base coach would. So to advance a runner, you gesture the Move in a circular fashion (like a coach sending a runner around third base). To send a runner back, you use a back and forth (left/right/) gesture. And to stop a runner at the next base you just put your hand up like a stop sign which is holding the Move controller horizontally (this same gesture + trigger will stop the runner in his tracks). Very simple, and very easy to remember.

Now for all of you who want to use the Move but don’t want to feel like you need to ice your shoulder after playing a video game, go check the options. We have plenty to satisfy all types of players. I will say this. Being that the Move controls are a totally new way to play the game, there is a definite learning curve. We have tutorials breaking down all of the controls available in the game. Getting your timing down with the pitching and hitting, and remembering the gestures in the heat of the moment will take some getting used to. But once you have it down, if you are like me, you won’t want to play the game any other way.. To play the game any more realistically than this, you will need to put on some cleats and go outside. I hope you enjoy.