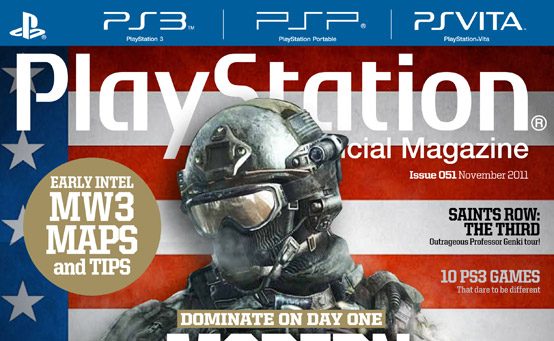 The mother of all shooters is about to hit and PTOM’s November issue has intel straight from the Call of Duty team on the changes to online multiplayer. We’ve got tips on strategy and tactics from Infinity Ward and Sledgehammer, as well as a sneak peek at two maps. It’s everything you’ll need to dominate in Modern Warfare 3 from day one…unless you’re like us and lack the ability to aim. Thank god for the noob tube…

If modern war doesn’t have enough shooting to satisfy your trigger finger, how about a good ol’-fashioned American crime spree? We’ve got Saints Row: The Third’s Super Genius Man-Cat Professor Genki with an exclusive tour of the violence-ridden city of Steelport. It’s the wackiest spin on the open-world crime game that we’ve seen since….well, never. Honestly, in what other game can you fire a weapon that shoots a mind-controlling octopus that you can detonate for wide-scale destruction? Or call in an airstrike to take out rival gang members? There’s even a controller button dedicated to delivering nutshots! It’s outrageous—in that special, tasteless way we so adore.

Rounding out the issue, we’ve got big-time previews of THQ’s brawlers WWE ‘12 and UFC Undisputed 3, hang out with platform pals in Rayman Origins and Ratchet & Clank: All 4 One, and take spin in Ridge Racer: Unbounded. We’ve also got the final verdict on the latest PlayStation releases including Resistance 3, Dead Island, Warhammer 40,000: Space Marine, NHL and Madden 12, and the oh-so-special Ico & Shadow of the Colossus Collection.