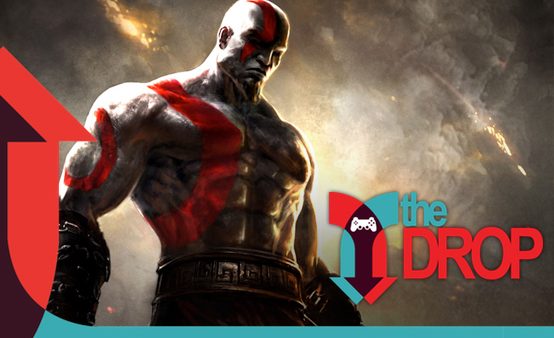 Kratos returns this week when his classic PSP adventures Chains of Olympus and Ghost of Sparta, receive the HD and stereoscopic 3D treatment with God of War: Origins on PS3 and PSN. If you missed out on Bulletstorm earlier this year (shame on you), here’s your chance to “kill with skill,” and download it on PSN.

PSone Classics and PSone Japan Imports both offer PlayStation nostalgia in the same week. Stretch out your trigger finger and enjoy The Drop.

God of War: Origins (Also on PSN) — This double-pack of carnage contains both origin chapters in the God of War franchise — God of War: Chains of Olympus & God of War: Ghost of Sparta. Both games are remade with high-definition graphics displayable on 3D HDTVs.

CHAINS OF OLYMPUS: As many who know the tales of the God of War know, Kratos, after being deceived into killing his wife and daughter, denounced his service to Ares. In order to seek absolution from his past sins, the Ghost of Sparta pledged himself as a champion to the Gods for the years to follow – these brutal crusades, in the name of Olympus, became legendary throughout the ancient world … Experience Kratos’ journey during the 10 years of servitude to the Gods of Olympus. In God of War: Chains of Olympus, Kratos will venture to lands that no mortal has ever walked upon.

GHOST OF SPARTA: Set in the realm of Greek mythology, God of War: Ghost of Sparta is a single-player game that allows players to take on the powerful role of Spartan warrior Kratos. This new adventure picks up after the first God of War concludes, telling the story of Kratos’ ascension to power as the God of War. In his quest to rid himself of the nightmares that haunt him, Kratos must embark on a journey that will reveal the origins of lost worlds, and finally answer long-awaited questions about his dark past. Armed with the deadly chained Blades of Chaos, he will have to overcome armies of mythological monsters, legions of undead soldiers, and amazingly dangerous and brutal landscapes throughout his merciless quest.

NHL 12 — EA Sports NHL 12 wants you to Be the Next Great Legend. Play your way to superstardom in the revamped Be a Pro mode and experience legendary moments in your player career as you shatter records and cement yourself in NHL history. Experience authentic action and energy of real life hockey as the NHL 12 Full Contact Physics Engine puts you in the rink with everything now live on the ice — shatter the glass, send helmets flying and knock players over the boards and into the bench. Experience a fresh new look and feel with all new gameplay presentation, and, for the first time ever, the chance to lace up outdoors under the lights in one of the biggest hockey events of the season, the NHL Winter Classic at Pittsburgh’s Heinz field.

White Knight Chronicles II — White Knight Chronicles II continues the epic story of Leonard with a brand new 30+ hour single player campaign. Featuring a fully redesigned, dynamic new combat system, you can create and customise your own exciting attack strategies and combos. With online play for up to six players, you can choose to tackle co-op quests or free-roam the game world as a team, plus the Georama feature returns allowing you to build your own customizable town online.

The Penguins of Madagascar: Dr. Blowhole Returns (Again!) — Save the world from Dolphin Domination! Dr. Blowhole is out to conquer the world and is using the Penguins to achieve that goal — whether they realize it or not. Jump into an all-new, raucous experience with 3 episodes and over 12 exciting levels as the Penguins embark on adventures in, under and outside of the zoo culminating in the grand finale in Dr. Blowhole’s Liar. Only you and zany Team Penguin can stop Dr. Blowhole from taking over the world!

Bulletstorm — Bulletstorm brings new furor to first-person shooter action thanks to its signature ‘kill with skill’ gameplay. The game tells the story of a futuristic confederation protected by an elite band of mercenaries: Dead Echo. When Dead Echo members Grayson Hunt and Ishi Sato learn they’ve been working for the wrong side, they’re betrayed by their commander and exiled to the far reaches of the galaxy. In Bulletstorm, Grayson and Ishi find themselves surrounded by hordes of mutants and flesh eating gangs in an abandoned paradise. They have two objectives: get off the planet alive, and exact revenge on the man who sent them there.

Players step into the role of Grayson Hunt complete with an arsenal of over-the-top combat moves and outrageously large guns. Bulletstorm’s array of distinct ‘skillshots’ produces unprecedented levels of frantic gameplay and yell-inducing satisfaction. The skillshot system rewards players for inciting mayhem in the most creative way possible. The more insane the skillshot, the more points players collects to upgrade their character and unlock weapons, which then allows them to execute even more creative moves and exaggerated skillshots.

From Dust — Created by famed French videogame designer Eric Chahi, this mysterious game tells of a world in terrible disorder, one that only you can set right again. Commanding the world around you as a child in a sandbox, players will help their people resist, expand and migrate so they can accomplish their quest to find a safe place in a land ravaged by the violent and catastrophic ways of Nature.

Gameplay in this innovative game is based on advanced technology that allows the entire world to act dynamically. The ground, water, and vegetation are all yours to interact with — breach a lake open, dig open a crater, set loose a lava flow … your powers are great, but how you choose to use them will determine the fate of this society.

Ferrari: The Race Experience — The official Ferrari licensed videogame experience, Ferrari: The Race Experience features the world’s most desired sports cars, including the Ferrari 458 Italia and Ferrari 599XX. Choose from an impressive stable of 34 Ferrari motors and race across 17 racetracks, including the street circuit Riviera and the ultra cool Fiorano test track. Players get their choice of GT Road Cars, GT Race Cars or Classic Cars. An all-new Assisted mode allows gamers of all skill levels to enjoy a Ferrari.

Elemental Monster: Online Card Game — Emerald Monster is a battle game where you the player make use of cards to summon beasts. Create your own deck of cards, then select three cards and place them on the battle field. You then select a monster to summon from one of these three cards. Each monster can be made to perform one of two attacks, or if you feel a slight imbalance against your opponent, you can recall your creature and send out another in its place. This PS3 entry in the franchise features over 10 hours of play in Single Player mode and online battles (with a pay-per-play system) for networked multiplayer bouts.

Renegade Ops (Demo Available) — Renegade Ops puts players in a mobile commando unit sent behind enemy lines to defeat Inferno, a madman intent on global domination. Defeat enemies across a range of stunning environments using a wide variety of vehicles, from dispersing electromagnetic shock waves to the deployment of a huge Gatling gun armed to the teeth.

Cyberbots: Fullmetal Madness — Cyberbots: Fullmetal Madness is a fighting game produced by Capcom in 1994 where the pilots of mecha battle each other. The game is a sequel to the scrolling fighter Armored Warriors. The game only had minimal distribution in arcades outside Japan, and none of the console ports were released overseas. Tech Romancer (ported to the Sega Dreamcast) is considered a spiritual sequel for this game; Jin and his BX-02 Blodia are present in it as an unlockable bonus character/mech.

Pong — Pong on the PlayStation takes that original idea, adds a super clean and smooth 3D and physics engine, and hammers out dozens of new ideas only a 3D game could possibly do.